It seems almost a lifetime ago when the SARS-CoV-2 coronavirus began spreading via community transmission in the United States, but in reality, we're just finishing the fourth week since the number of confirmed COVID-19 cases in various parts of the U.S. began being routinely tracked.

Here's what the daily progression of cumulative COVID-19 testing, confirmations, hospitalizations, and deaths look like when tracked at the national level in a tower chart over the four weeks from 10 March 2020 through 7 April 2020. 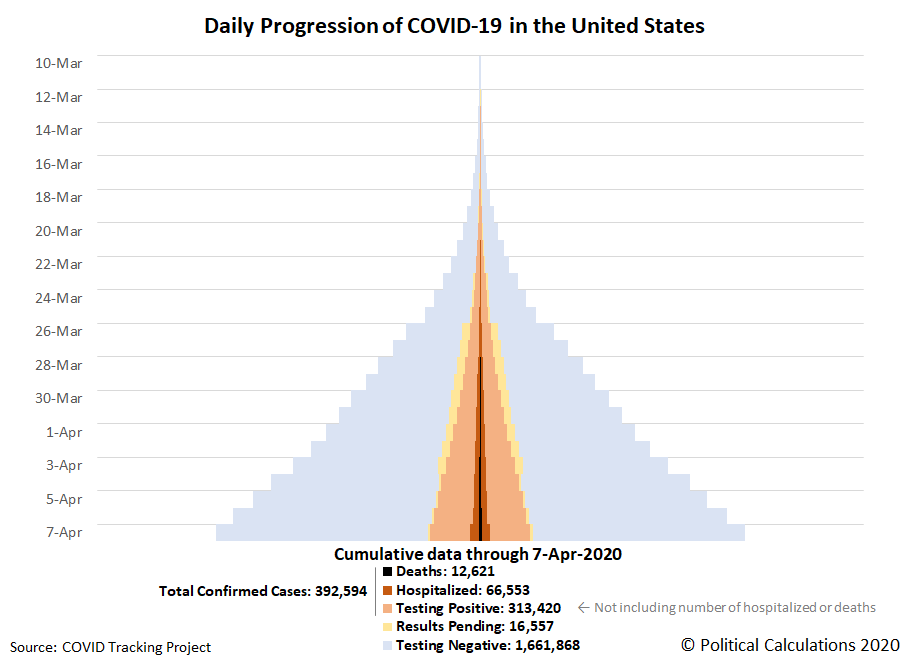 The spread of the COVID-19 has been particularly concentrated within several regions of the United States, which becomes very evident when we present the daily progression of COVID-19 over the first four weeks for which we have numbers for confirmed cases, hospitalizations, discharges, and deaths at the state or territory level in the following skyline tower charts. Each of these charts span the same period of time and the width of each corresponds to 1% of each state or territory's population, making it very easy to see which states and territories have been most impacted and which have been the least impacted through the first four weeks of the coronavirus epidemic in the U.S., especially since we've ranked them from the highest percentage of infection within the state's population to the least as you read from left-to-right, top-to-bottom.

For each state or territory shown above, if you add the number of deaths, discharges and hospitalizations listed for 7 April 2020, you'll have the cumulative hospitalizations through that date. 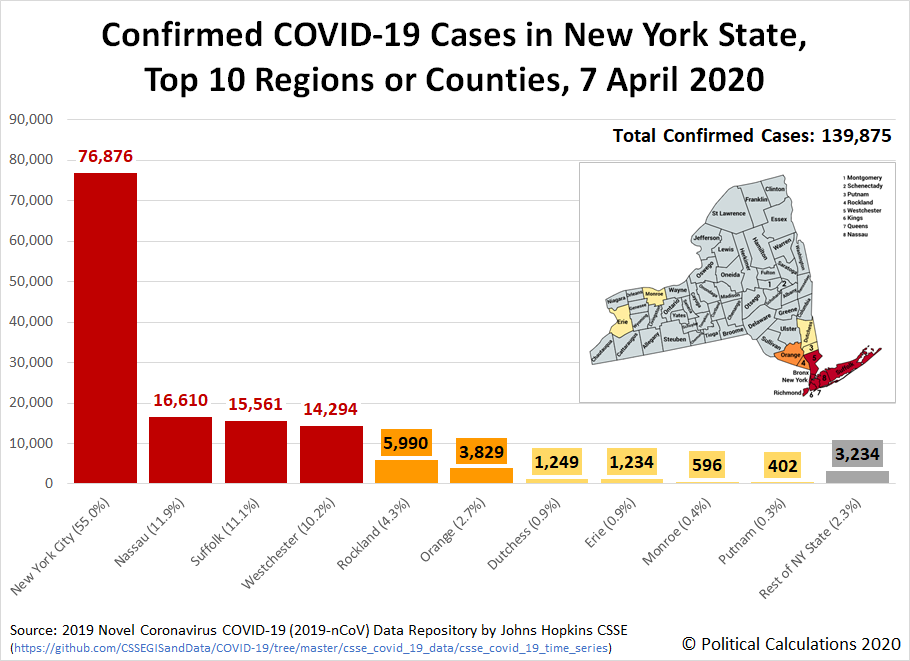 Why has New York City and its surrounding metropolitan area been hit so hard? If we go back to the beginning of the epidemic's breakout within the city, we can find the answer in three words: the city's leadership

New York City’s top health officials were tracking warning signs of the flu, and didn’t like what they were seeing: A massive, late-season spike in influenza-like-illnesses that revealed a troubling aberration.

So on March 10, Health Commissioner Oxiris Barbot went to City Hall to share the findings with Mayor Bill de Blasio and urge him to begin taking more drastic action to control the spread of the coronavirus, which has since claimed 450 lives across New York City. De Blasio resisted, believing that closing schools, restaurants and cultural centers would cripple the city’s economy and disproportionately hurt the marginalized residents he aims to prioritize.

And it never got better from there. Speaking of the perceived interests of the 'marginalized residents' the mayor chose to prioritize in resisting implementing effective quarantine practices, which instead all but ensured that portion of the city's population would be put at the greatest risk, the mayor and his supporters are now trying to tell a very different story in attempting to shift their culpability.

Here's a very short guide to some of the data visualization we've featured for tracking the spread of the coronavirus epidemic in the United States: