U.S. agricultural exports to China had a sluggish start to 2020 relative to the lofty expectations set forth by the Phase 1 trade agreement, but the August value soared substantially over that of the prior months owing to strong soybean shipments.

U.S. cotton exports to China hit a seven-and-a-half-year high in August, while corn shipments to the Asian country reached an all-time record. But the combined export value of cotton and corn, the No. 2 and 3 items in August, was less than half that of soybeans, emphasizing the importance of the oilseed in the trade relationship.

With January 2020's 'Phase 1' trade deal, the volume of trade between the U.S. and China should have begun recovering in February. Instead, it plunged through March 2020 with the coronavirus pandemic starting in China, but started rebounding in April. In August 2020, the surge in U.S. exports to China sent the volume of trade is $1.3 billion higher than in August 2019, as shown in the following chart. [Please click here for a larger version of the chart]. 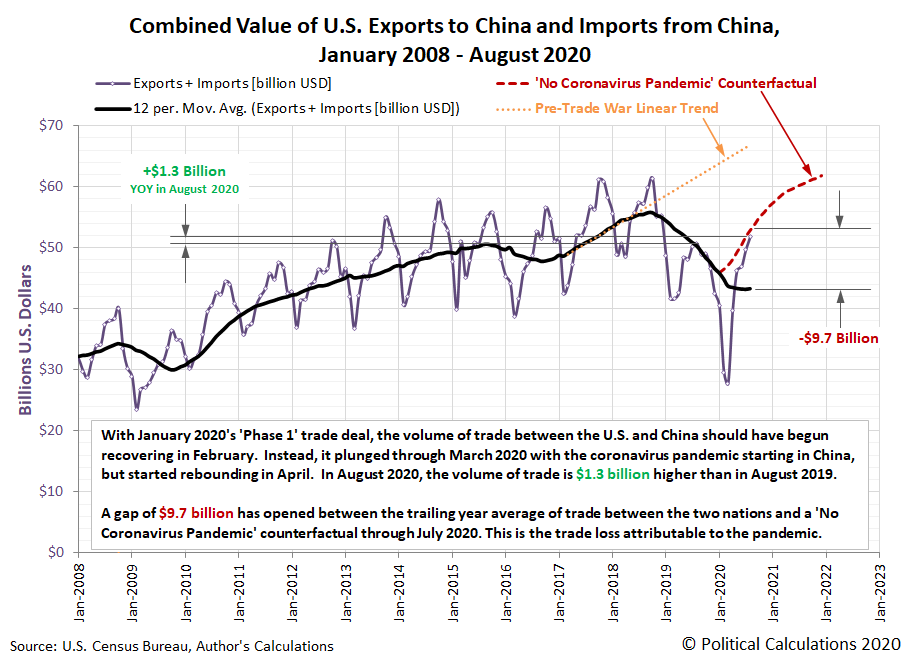 Since January 2020, a gap of $9.7 billion has opened between the trailing year average of trade between the two nations and a 'No Coronavirus Pandemic' counterfactual through July 2020. This gap is the loss in trade attributable to the pandemic.

Looking at the trajectory of the combined trailing twelve month average volume of U.S.-China trade (the heavy black line in the chart), it appears July 2020 marked a bottom for this measure of the impact of the global coronavirus recession.