From time to time, we take on the challenge of telling a complex story through a picture. The story of the crude oil imported by the United States from Russia is just that kind of story because of all the economics and geopolitics involved.

Here's the picture, spanning the years from January 2009 through March 2022, in which we see U.S. imports of Russian crude oil rise and fall multiple times, each driven by different factors. 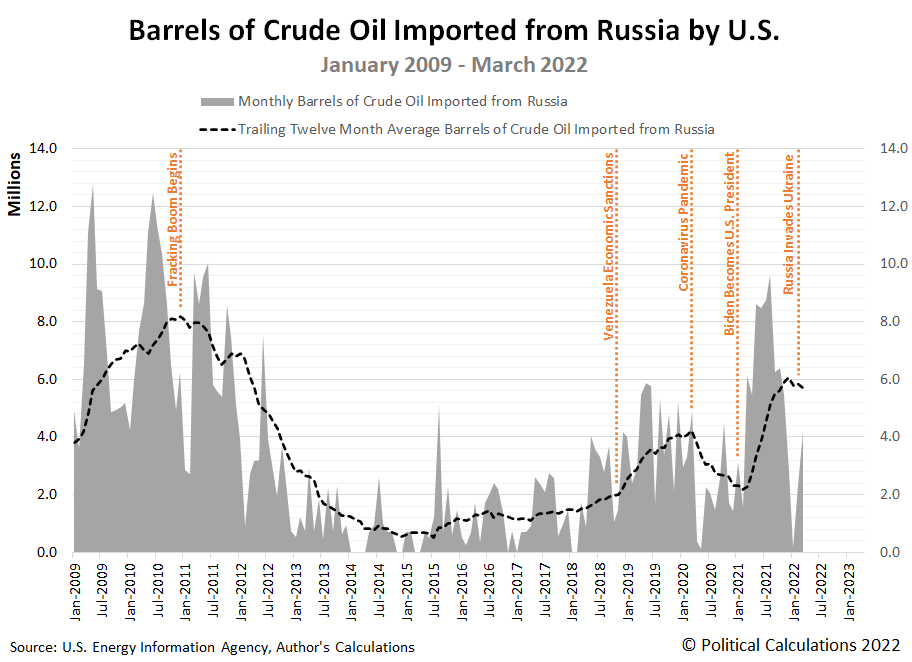 Here's the information the chart is expressing:

From here, we'll let the headlines tell the most recent part of the story, which will begin from top of the latest peak in the U.S.' crude oil imports from Russia. Spoiler alert: they involve lots of new sanctions and actions that have contributed to today's much higher oil prices.

That ends the period covered on the chart, with Russian crude oil imports falling once again. But before any Biden administration official might celebrate the apparent success of their anti-Russia sanctions, there are two more breaking news stories that explains why they've so far failed to achieve the success they hoped for.

In addressing domestic oil production, the Biden administration isn't as powerless as it makes itself out to be. It can take positive steps to boost and stabilize domestic oil production, such as lifting regulatory burdens and underwriting and insuring new investments to minimize the economic risks for producers that haven't recovered from the coronavirus pandemic crash. A good question to ask is why aren't they?