Just days ago, Barry Ritholtz featured the following image primarily displaying the day-to-day volatility in the Dow Jones Industrial Average (DJIA) from January 2, 1900 through December 31, 2007, taken from a graphic essay in the New York Times: 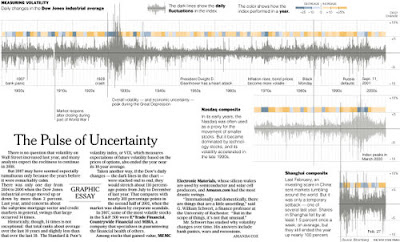 The chart reveals the day-to-day percentage swings in the DJIA index and ties significant movement in the market to historic events, but the main thing we believe the chart illustrates is how difficult it is to decipher significant patterns within the stock market. Worse, looking at the day-to-day price swings doesn't do much in helping to diagnose whether the market, and to a larger extent, the U.S. economy, is truly healthy or not.

Separating the signal from the noise doesn't get much easier when you look at the average percentage changes in the market over time. The following chart shows our data for the S&P 500 from January 1871 through December 2007 and illustrates the year-over-year changes in the rate at which the average monthly price per share of the index changed over that time: 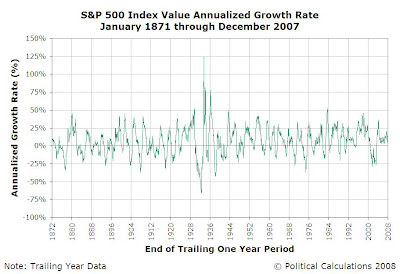 The chart shows wide swings, generally corresponding with the cycles of boom and bust in the overall stock market, but nothing that really says "This is a boom, and that is a bubble!" or "That's just a correction, that's a crash, and that over there is a full-up recession!"

Since it leads to where we're going next, our next chart shows the year-over-year changes in the rate at which the average monthly cash dividend per share for the S&P 500 changed from January 1871 through December 2007: 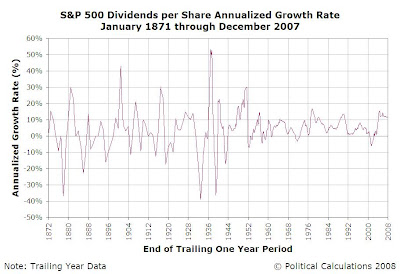 Separating the Signal from the Noise

We've remarked before that the strong correlation between the value of the S&P 500 index and its dividends per share make the Price-Dividend Growth Ratio that we recently defined especially useful as a means for benchmarking the performance of the stock market. This brings us to our next chart, which shows the value of the Price-Dividend Growth Ratio from January 1871 through December 2007, as determined using the trailing year Price per Share and Dividends per Share growth rates: 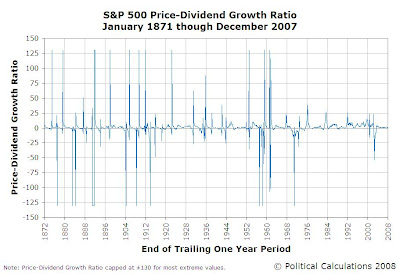 Suddenly, the stock market looks very, very different. We find that the market consists of periods of relative calm, in which the Price-Dividend Growth Ratio might be described as having at least a stable distribution, punctuated by periods of disequilibrium. We also find that the market is generally a lot less volatile than it used to be.

In fact, let's do just that. Our next chart presents the same data as before, but this time incorporates the dates corresponding with recessions as determined by the National Bureau of Economic Research: 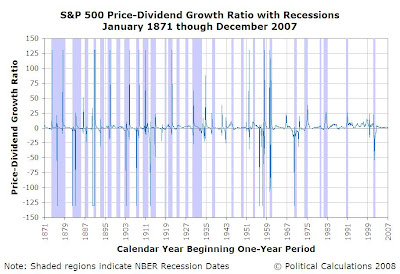 Note: The chart above presents the same Price-Dividend Growth Ratio data we showed in our previous chart, but shifted to coincide with the beginning of the one-year period covered by the underlying price-per-share and dividends-per-share growth rate data. For clarity, the first point on the chart, shown as beginning in 1871, corresponds with the period from January 1871 to January 1872, while the last point on the chart corresponds with the one-year period from December 2006 to December 2007.

We find that recessions do coincide with many of the largest "spikes" in the Price-Dividend Growth Ratio. We also note the presence of other spikes that do not coincide with recession dates determined by NBER, but note that these generally represent short term disruptive events that failed to satisfy the traditional two-quarter duration threshold for a recession to be declared.

And so, with just a glance, we can confirm that the Price-Dividend Growth Ratio may be used to determine the magnitude of relative disequilibrium in the S&P 500, and therefore, might be successfully used as a near real-time indicator of the overall health of the stock market, and by extension, the U.S. economy.

The Stock Market Through December 2007

While we have opened a mine of opportunity to explore, a close examination of the S&P 500's Price-Dividend Growth Ratio through December 2007 does not suggest the building of a recessionary spike through this time. The key thing to measure however will be any changes that the dividend-paying companies of the S&P 500 make during the course of the year that would significantly reduce the rate of dividend growth, since this is the driving factor that produces the "spike" effect which indicates real distress in the stock market.