The Bureau of Labor Statistics released the Consumer Price Index for March 2008 today, which means that we can finally update our signature tool for finding the average performance of the stock market between any two calendar months since January 1871, The S&P 500 at Your Fingertips!

But wait, that's not all! With the first quarter of 2008 now officially over, and the fourth quarter of 2007's earnings finally finalized, we've gone back and revised all our dividends and earnings data in the tool going back as far October 2007. Quick summary of the revisions: dividends same to better, earnings worse.

Of course, we just don't talk about the market. We take pictures of it as well! First up, here's he S&P 500's average monthly index value since January 1952, which covers the modern era of the U.S. stock market: 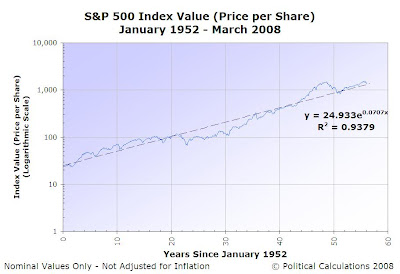 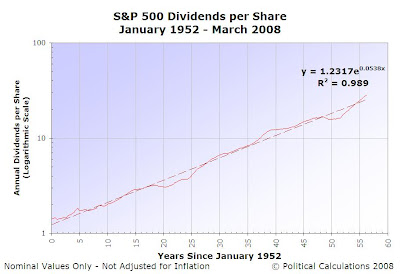 And here's an update of our signature chart showing the S&P 500's average monthly index value against its trailing year dividends per share since June 2003, coinciding with the most recent period of market stability and the beginning of a disruptive event in the market in January 2008, complete with a bonus point showing where the stock market is as of the April 15, 2008 market close: 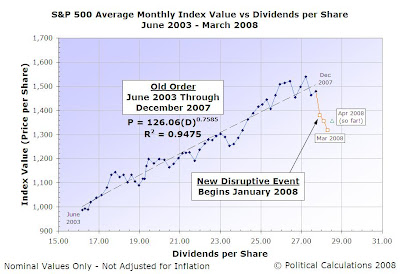 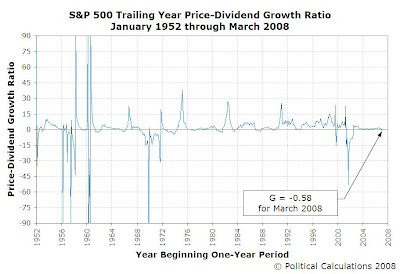 These latter two charts indicate that the turmoil being created by the troubles of the housing sector and financial institutions are, as of March 2008, largely contained to those sectors. The stock market is so far proving to be somewhat resilient and the level of distress in the market is not yet building toward a spike.

That's important as spikes in stock market distress often coincide with recessions in the U.S. economy. For that to happen, a serious erosion of earnings would need to occur that would then lead to zero year-over-year growth in the market's dividends per share. The trend at present is that this rate of growth is declining, but still well in positive growth territory (as projected by S&P, the year-over-year dividends per share growth rate will slowly decreased from 10.45% in December 2007 to 9.27% by year end.)

However, a spike in stock market distress is not a requirement for a recession to occur, as the U.S. economy is a lot bigger than its stock markets. At present, the best analog we have in our historical data to today's economy and market conditions is the period from 1978 to 1980.

Ultimately, we may see things play out along those lines, albeit on a much smaller scale, as both inflation and unemployment are much lower today than in those strained days. With the Price-Dividend Growth Ratio at -0.58 as of March 2008, we note that a negative value of this ratio often precedes periods of real distress in the stock market.