We're coming to the conclusion that a lot of people have the wrong idea about chaos. For example, if you ask someone if the stock market is a pretty chaotic place these days, they'll say it is and what's more, we'll agree with them. If then you ask them if that's a good thing or a bad thing, they'll say that chaos in the stock market is a bad thing.

But is it really? Here's the thing we're finding out about chaotic systems: Chaos is where all the basic rules apply, but outcomes are difficult to anticipate because of the complexity of the interactions involved.

What makes those interactions complex is the effect of interdependencies in the market. At any given time, investors are dependent upon new information coming into the market, which drives their expectations of how the companies in the stock market will do in the future. Those expectations, in turn, directly drive stock prices and, as we've previously demonstrated, it is dividends per share, the sustainable portion of corporate earnings, that is the key driver of the value investors place upon stock prices.

Want to see how that works in practice?

In our fourth anniversary post, we hinted that dividend futures data might be pretty important in presenting our first chart specifically looking at a closeup of the acceleration of both the growth rate of stock prices and the growth rate of dividends per share for the S&P 500:

Let's next zoom in on the arbitrary ten year period from 2001 through 2011. We've selected this time frame since we have dividend futures data extending midway into 2010, which we wanted to incorporate for its potential relevance.

Today, we're going to demonstrate how that dividend futures data is especially relevant in setting the growth rate for stock prices. We'll begin by first considering the oldest futures data we had recorded for a different project, from 22 October 2007, which we'll present in a chart showing the accelerations of the growth rate of stock prices and trailing year dividends per share for the S&P 500 through October 2008: 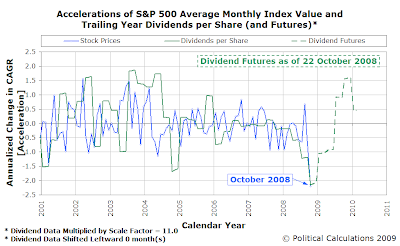 Here, we see investors acting contemporaneously with the then new information that corporate dividends were going to suffer in the fourth quarter of 2008. Stock prices sharply accelerated downward to coincide with that change in investor expectations for the growth rate of dividends per share. Here, we captured the acceleration of stock prices through November 2008. More importantly though, this chart demonstrates that as of early December 2008, investors were focusing upon where the change in the growth rate of dividends per share would some three months ahead, or rather, where they would be at the end of the first quarter of 2009, and that information drove the change in the growth rate of stock prices for November 2008.

We'll next move up to 20 January 2009. The big change here is that investors now had new information of how the companies of the S&P would fare to the end of the third quarter of 2009 and adapted the value of stock prices accordingly. We visually confirm that investors were focused on the data through the third quarter of 2009 with the nine-month "leftward" shift in the dividend data. 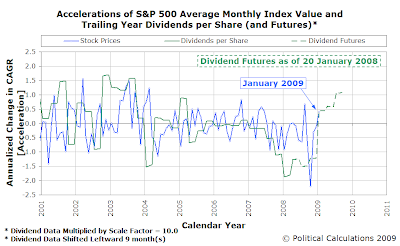 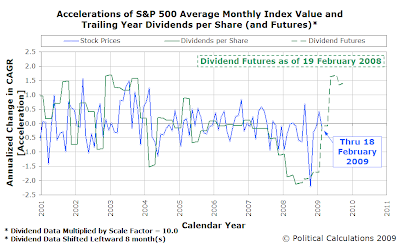 And that is our direct evidence of the order that underlies the apparent chaos of the stock market. It's not definitely not a bad thing because it clearly demonstrates that what's happening in the markets isn't random, but is rather the rational response of investors reacting to information as they receive it. What's more, it's not hard to put this kind of analysis together, the only difficulty we have doing it arises because the interactions we're observing are complex. As a practical matter, our experience to date (and remember, we've only been doing this since December 2008) is that you can work out either how much things will change, or perhaps when they will, but not necessarily both simultaneously.

Speaking of which, using today's dividend futures data, look at what's likely next in the cards for stock prices, barring new information that would whack the level of dividends per share expected to be paid out in the foreseeable future. We're just happy we have a second datastream that supports the limb we've already climbed out upon!