Political Calculations
Unexpectedly Intriguing!
28 April 2009
Where It Ought To Be

Scroll down for update!

Barry Ritholtz is pessimistic this morning:

Note the question mark in the title — is this the same gig as yesterday? Yesterday morn also had Dow Futures off triple digits, but it was less of a sell off than implied.

But it didn't seem to matter much– markets rallied after the open, and closed much better than the futures would have suggested.

Is today more of the same, or is the overdue correction imminent.

I suspect the latter.

Should we really expect stocks to drop today? And if so, why?

Answering the second question first, based on the kind of analysis that we've developed, we would expect stock prices to drop today (and stay down) if a company, or number of companies, representing a significant portion of the market capitalization of the S&P 500, were to announce that they would be slashing their dividends well into the future. 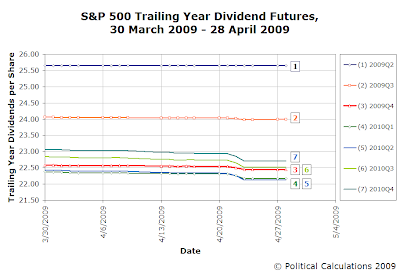 Is that what lies in the cards for the stock market today? To find out, we went to IndexArb's dividend analysis data and used their projections of future dividend payments to construct a quarter-by-quarter representation of trailing year dividends per share (incorporating historic data for dividends per share which we obtain from this spreadsheet from Standard & Poor.) Combined with our best estimation of where trailing year dividends in the current quarter will end up, we've taken these projections and charted them since 30 March 2009. The results are presented in the chart to the right and above (click the chart for a larger image.)

But that begs the question: where do we expect stock prices to go, even if we don't expect them to drop today? 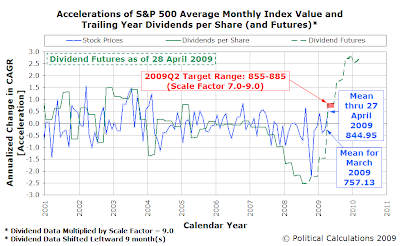 For that, we've updated our projections based upon the latest data and merged it with what we've observed about how stock prices work. Here, we project a lower range for where we expect stock prices to be during the second quarter of 2009 of 855 to 885, based upon the range of values ypically between 7.0 and 11.0 for the amplification factor that we've observed for the market since 2001 (we've indicated the lower half of the range in the chart.) And, sure enough, we've been observing the market bouncing around the lower end of our projected range since 9 April 2009.

Consequently, we see stock prices today being pretty much where they ought to be.

Are We Really Any Good at This?

Maybe. You'll need to be the judge.

We've been progressively building a pretty decent, but not perfect track record using an analytical method that we've developed for anticipating the direction and magnitude of changes in stock prices. The method takes changes in the future rate of growth of dividends per share for the stock market and shifts those forward looking expectations to the current day, amplifying those changes into a corresponding change in the growth rate of stock prices.

Using that kind of analysis, we've been able to anticipate that the market had lower to go before hitting bottom back in early March 2009, when and where it would go after it hit bottom (here's our snapshot marking that occasion), that a sudden large drop in stock prices was nothing to be concerned about and most recently, when the market recently provided an unexpected buying opportunity for investors that we bet our own money on! 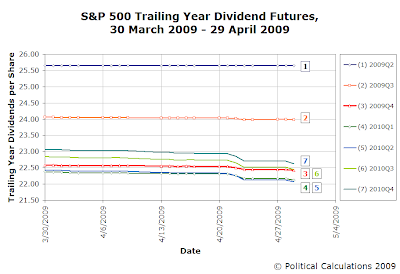 Not enough for us to alter our overall projection for the second quarter of 2009 at this point, but enough we think to move stocks a touch lower tomorrow. Then again, who's to say that another IBM-type announcement isn't in the works somewhere in an S&P 500 boardroom?

Update 30 April 2009, 7:15 AM PDT: It looks to us as though there may be a short term selling opportunity developing. Although what we're seeing in the market these last two days fits our expectations for where stock prices will be for the quarter, we recognize that the market is likely getting ahead of itself in the short term, with stock prices going up while their underlying dividends per share (and the corresponding accelerations) are headed downward, as the market would appear to be being driven more by noise rather than signal. Here's the picture for the expected future dividends per share as of 30 April 2009: 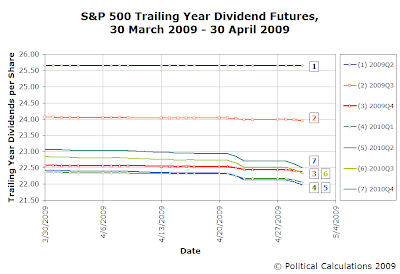 We dug deeper into the individual stock dividend futures between yesterday and today, and found that they indicated that ExxonMobil had been expected to increase their dividend payout to $0.45 per share, rather than the $0.42 they actually did, which accounts for much of the decline we see in dividend futures for today.

Let's just say that we would not be surprised to see a pullback in the next several trading days.

Today the market is up substantially (at this writing), which we'll note in a separate post, as changes in stock prices are now being measured from a new base. We're also going to change our focus with these posts, so we'll no longer be tracking the market in near real time, as we simply don't have the time available to do it (we're certainly not paid to do it!) Instead, we're going to be focusing more on more significant movements as they develop.