We couldn't help notice an unusual coincidence yesterday. First, the Economic Freedom of the World 2009 Annual Report has just been released by the Fraser Institute (HT: DoL), which is itself a pretty momentous event. Then we found that Will Franklin has tapped the Fraser Institute's 2008 Economic Freedom of North America to create a chart that ranks individual U.S. states and Canadian provinces according to their relative levels of economic freedom.

We thought we'd mark the occasion by taking the figures we already had for each U.S. state and Canadian province's GDP per Capita adjusted for Purchasing Power Parity for 2004 and correlate that data with their respective Economic Freedom Index score from 2008. The chart below reveals what we found: 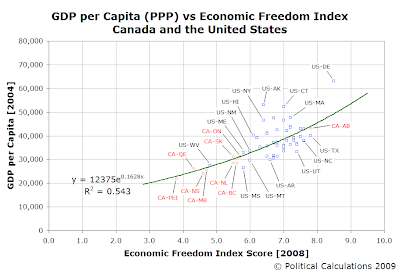 It would appear that there's a pretty strong correlation between how much economic output a state or province generates per person and the level of economic freedom that exists in each.

Will Franklin comments on the Economic Freedom Index and the general correlation he observes between it and how a state or province performs economically:

The index is based on 10 components in three categories: