We've got good news and some potentially bad news regarding the current state of the stock market. First, the good news: stock prices are rising thanks to what seems to be an improving outlook in the market's underlying fundamentals. 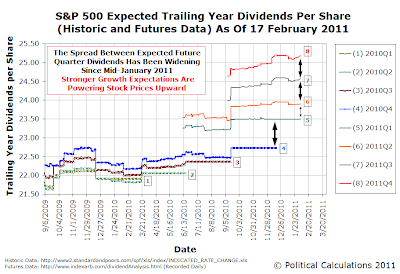 We can see this improvement in the expected future level of dividends anticipated by the market, where we can see changes in the fundamental outlook for the stock market by observing how the spread between the amount of cash dividends expected to be paid out in future quarters is changing over time.

Here, we see that since mid-January, the spreads between the amount of dividends expected to have be paid out in future quarters is widening, which suggests that the business situation of the publicly-traded companies that make up the S&P 500 index is improving.

That improving outlook then would lead us to anticipate that the average of stock prices for the S&P 500 in the month of February 2011 will likely fall in a range between 1294 and 1332, at least, if you go by the math behind how stock prices work. This marks an improvement from the 1289-1321 range that we had previously forecast for the S&P 500 at the beginning of the month.

That, in turn, suggests a correction is in the offing.

Now, that's no surprise given that we've had another indicator pointing to February 2011 as being a very likely month by which a correction would begin, but we can't predict which day that will happen. 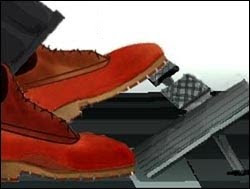 There's another angle to consider as well. If the U.S. Federal Reserve is indeed using stock prices to assess how well their Quantitative Easing 2.0 program is going in setting future inflation expectations, stock prices running hot as they are today would be a signal to them that they need to take their foot of the QE pedal.

That may also have a negative effect on stock prices in the current economic situation, especially if future inflation expectations fall as they did in the interval between the Fed's QE 1.0 program and the current QE 2.0 program to near deflationary levels.

Unless, that is, they've finally been successful in convincing everyone that inflation is here to stay.