Having looked at how Greece arrived at its current crisis, we thought we'd turn to the next country that is coming to dominate the bad economic news in Europe: Spain.

Here's our chart showing the relationship between Spain's GDP per capita and its annual government tax collections and expenditures per capita for each year from 2000 through 2011: 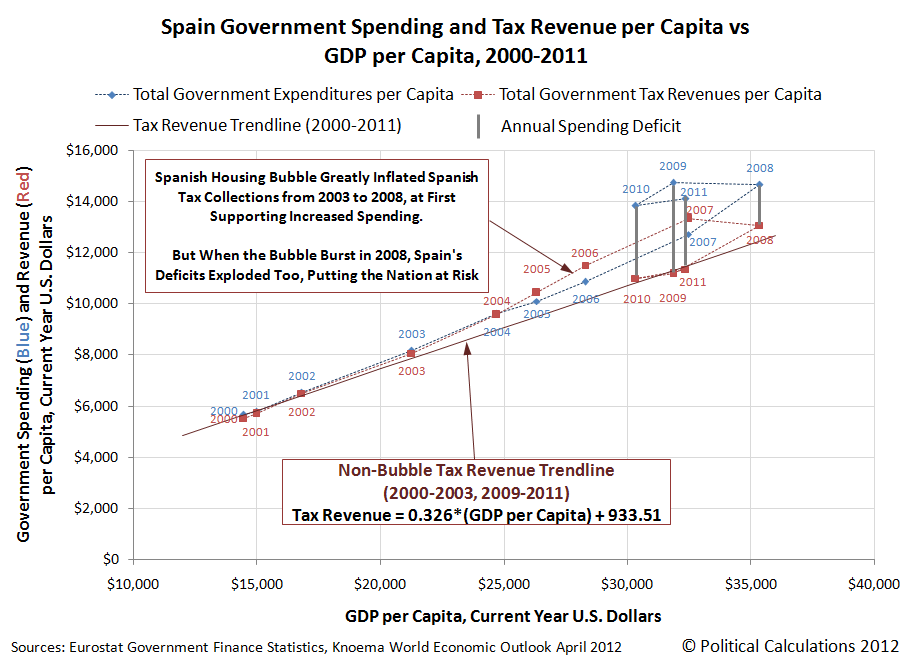 Unlike Greece, we find that the Spanish government's expenditures throughout much of the period appeared to be stable, with the government running significant surpluses in 2005 through 2007.

Unfortunately for Spain however, those surpluses were based on that country's large housing bubble, which greatly increased the numbers of people paying the nation's highest income tax rates as their incomes were highly inflated during this period of time. We know this is the case because Spain's tax rates throughout nearly all of this period were very stable, and essentially unchanged from 2000 through 2010. The only way we would see this pattern then is if the distribution of income in Spain during this time shifted to increase the numbers and incomes of upper income earners, who were benefiting from the bubble economy.

Instead, we find that Spain's financial crisis came about because it also increased its spending to keep pace with its bubble economy, which simply could not be sustained. Once the bubble burst in 2008, the Spanish government found itself in a very precarious position as it was spending far more money than it could ever count upon sustainably collecting. And as the Spanish economy worsened from 2008 through 2011, it created even greater strains upon the nation's finances as the economy plummeted into deep recession, given the large scope of the malinvestments weighing it down.

That brings us to today, where the fiscal situation of Spain threatens to become even worse because of the deteriorating health of its banking system. Here, because Spanish banks were exposed to so much of the fallout from the bursting of the Spanish real estate bubble, whether or not they can continue now depends upon whether or not they can secure a massive bailout from the government and the European Union, as the threat of a national financial system collapse is becoming an almost inevitable possibility.