Political Calculations
Unexpectedly Intriguing!
28 January 2013
From Order to Chaos and Back Again

Today, we're going to summarize the major trends of the last 22 years in the U.S. stock market as represented by the S&P 500 in a single chart as we introduce some of our analytical methods to our new readers.

To get up to speed with the information we're presenting, you should be aware that we've demonstrated over the last several years that the stock market typically operates in one of two states, which we've characterized in our most ground-breaking analysis as being either in a state of order or in a state of chaos.

During periods of order, both stock prices and their underlying dividends per share are closely coupled with each other, so much so that the variation in stock prices about a major trend defined by the same kind of simple power law that shows up all over nature, and which we've found can be described by the math of normal statistical distributions. During periods of chaos however, stock prices and dividends per share become decoupled from one another as a different kind of order takes hold as stock prices explode into Lévy flight, for which we've developed a different kind of math to describe and anticipate.

With that background now in place, here's our chart showing how the S&P 500 has swung from order into chaos and back again since December 1991: 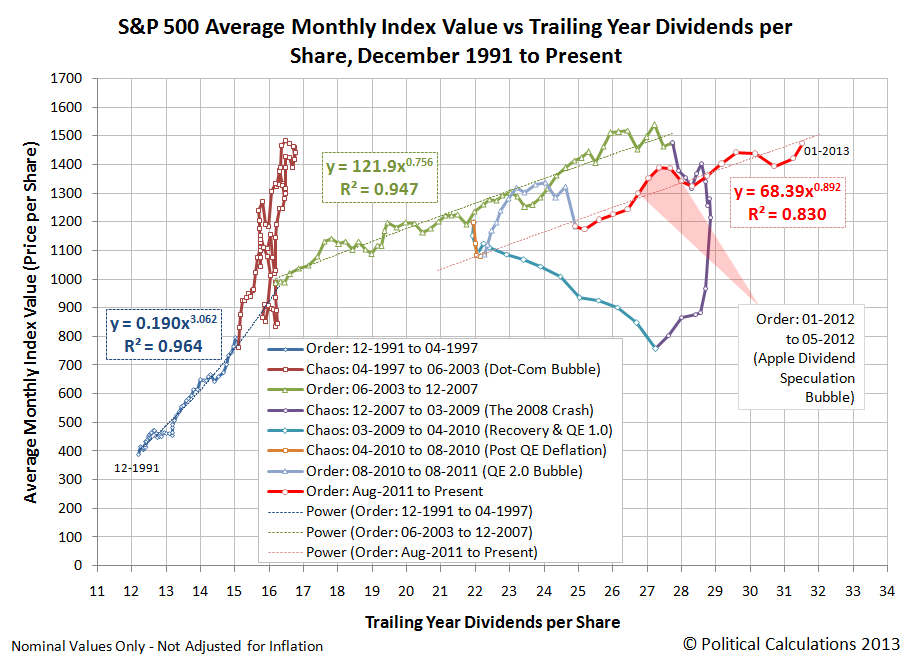 What makes this chart different from the one we last presented in September 2012 is that we've gone into greater detail in identifying the major influences that have dominated the U.S. stock market since the last major period of order ended in December 2007.

Here's our quick guide to each of the major periods of either order or chaos in the U.S. stock market since December 1991:

Following the disruptive event of the Gulf War, stock prices were closely coupled with dividends per share in the period through much of the 1990s, ending in April 1997.

Stock prices became decoupled from their underlying dividends per share when the U.S. government suddenly opened up the gap in the tax rates that applied to dividends and capital gains at the end of April 1997. With the tax rate on capital gains suddenly so much lower than it had been, an imbalance favoring non-dividend paying stocks exploded in what became known as the "Dot Com" stock market bubble, after the early Internet-related companies whose stocks benefited from the change in the nation's tax laws.

On 28 May 2003, President George W. Bush signed the Jobs and Growth Tax Relief Reconciliation Act of 2003 into law, setting the same single tax rate for both dividends and capital gains and ending the imbalance between the two. Order quickly resumed as stock prices and dividends per share once again became closely coupled with one another.

Order in the stock market came crashing to an end as stock prices began plummeting in January 2008 given a high level of distress in the U.S. banking and financial industries, which erupted into an extremely deep crash as the U.S. automotive industry saw the failure of both General Motors and Chrysler after August 2008 thanks to a very large spike in oil and gas prices that killed demand for these companies' gas-guzzling product lines. Stock prices ultimately bottomed on 6 March 2009 as China outlined how it would implement a massive economic stimulus program that would boost the entire world economy.

With the bottom now in place, U.S. stock prices began to respond positively to a change of outlook for U.S. companies as the rate of descent for their expected future dividends began to slow and reverse.

The Federal Reserve also implemented its first quantitative easing program (QE 1.0) in March 2009, however it didn't have much impact in affecting stock prices until after February 2010, as it generated a rapidly inflating bubble in stock prices as trailing year dividends per share finally bottomed after the crash.

Although order technically returned to the stock prices after June 2010, the Federal Reserve's announcement that it would implement a new phase of quantitative easing (QE 2.0) near the end of August 2010 soon boosted stock prices with respect to where they had just stabilized with respect their dividends per share. The resulting bubble in stock prices continued for a full month after QE 2.0 ended on 30 June 2011, with stock prices finally falling back to where the equilibrium established in the new period of order would place them in the absence of an effective ongoing quantitative easing program by the Fed.

Order: August 2011 to Present (The Current Period, at least through January 2013)

Since August 2011, the relationship between stock prices and their underlying dividends per share has largely been stable, except for a brief period from December 2011 to May 2012 which was characterized by speculation with respect to the stock of Apple (NASDAQ: AAPL).

Here, a dramatic run-up in the stock began after it bottomed in mid-December 2011 on the speculation that Apple would initiate a new dividend. The stock then rose some 67% before peaking on 9 April 2012, just three weeks after Apple made its official dividend announcement. The company's stock price then quickly fell back by the end of May 2012 to where it then would follow a much less speculation-driven trajectory.

The company stock price has had an outsize effect on the valuation of the U.S. stock market during this period, as it has competed with ExxonMobil (NYSE: XOM) for being the largest company in the S&P 500 by market capitalization for much of the last year.

That brings us up to today, as the stock market is continuing its rally since mid-November 2012, where some of the rise in stock prices might be perceived to be due to the "magical" phenomenon of mean reversion. However, we've found that there are much more fundamental factors at work behind the rally using our chaos-based stock market analysis.

So there you have it - 22 years of the stock market explained in one chart. We'll close by observing that the Federal Reserve has once again initiated a new round of quantitative easing in December 2012, similar to what it did with QE 1.0 and QE 2.0, which we'll call QE 4.0, as the previously announced QE 3.0 was different in that the Fed focused solely on buying up mortgage backed securities instead of buying up U.S. Treasuries as well. At this point, it is still too early to tell if the Fed's newest round of quantitative easing will have the same impact on stock prices with respect to their dividends per share as the previous rounds appear to have had.

If it does, we'll know shortly, as the current period of order in the stock market gives us the means to determine what impact that might be with the analytical methods we've invented during the last several years.

This is a big part of what we do here at Political Calculations. Welcome to the cutting edge....