Political Calculations
Unexpectedly Intriguing!
06 December 2013
The Men Who Weren't There

What is the lasting economic impact of the men who died while serving their country in war?

In our last installment, we showed that the single greatest factor behind the exponential increase in the number of single person households after the 1930s was the loss of over 416,000 men who died while in military service during the Second World War. The vast majority of these men had been drafted into military service, all between the ages of 18 and 37, where they were inducted after being selected through a lottery process operated by their local draft boards.

That lottery process ensured that approximately equal numbers of healthy American men by year of birth would enter into military service, which explains why the average age of the men who served in the U.S. military during World War 2 was 26. And since over 87% of U.S. military casualties in the war occurred in 1944 and 1945, enough time had elapsed from when President Franklin D. Roosevelt imposed the draft by executive order for the population of American casualties to reflect the age distribution of those who had been drafted. 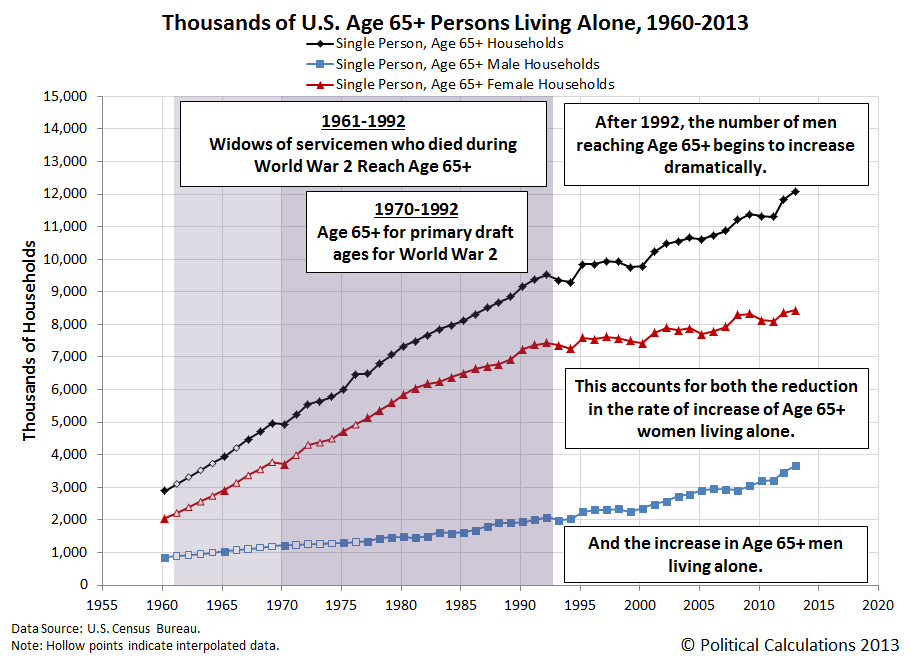 The Hole They Left Behind in American Society

How can you measure the economic impact of men who died?

The only way that can really be done is to measure the size of the hole they left behind in society. Here, that hole can be measured by the population of women who lost their husbands and boyfriends, who because the number of women outnumbered the number of men after the end of the war, meant that many would have to go on to either live with their families or alone as they aged. Many of the men who had been their contemporaries in age were no longer there.

Since most American women in this era were homemakers, a large majority of these women would be dependent upon their families or upon survivors benefits for widows for their income. Others would find work and earn wages or salaries, but with little education or previous work experience, most would go on earn very low incomes throughout their lives.

But not just low incomes. Their incomes were the lowest of all income earners in the United States: In this chart, we can see the median incomes earned by women who worked (and earned wage or salary income) and those who did not (whose income came from other sources, such as survivors' benefits provided by the U.S. government.) We can also see how they compared to American men and to typical American households consisting of at least one man and woman for the years from 1947 through 2012, all adjusted for the effect of inflation to be in terms of constant 2012 U.S. dollars.

By the time many of these women reached Age 65, they would find themselves living alone in increasing disproportionate numbers, as their parents passed away for those who continued to live with their families or because that's how they had lived for years. The number of households in the United States consisting of just one Age 65 woman living alone would rise dramatically from 1960 through 1992 as a direct consequence of the deaths of so many men during World War 2: 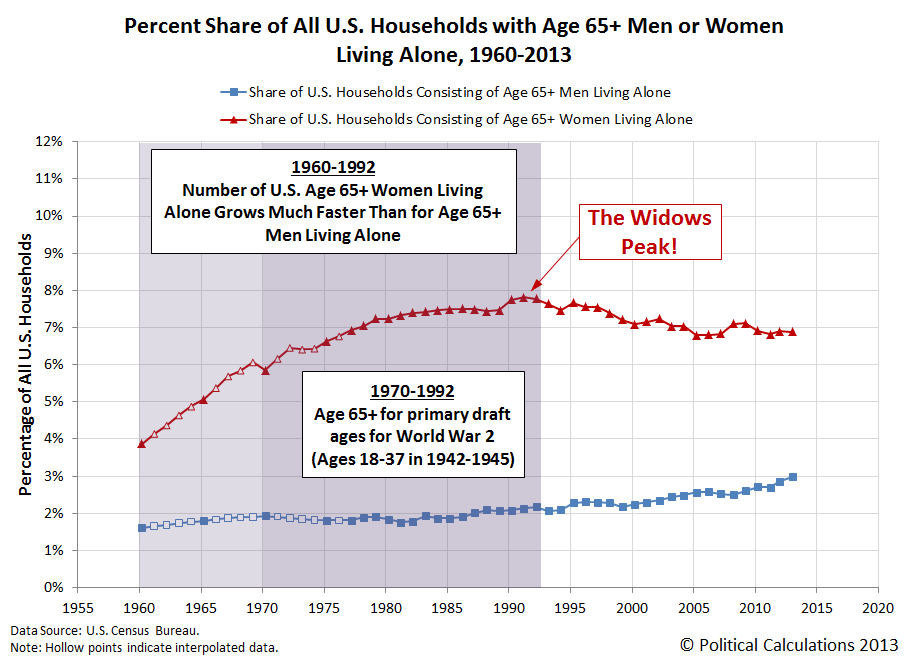 But it is the absence of men surviving to be at least Age 65 from 1970 through 1992 that would have the greatest economic impact on the nation, because the men who were drafted into service represented the majority of casualties for the war. Because they didn't survive and because they didn't live and work to support their families after they came home, that resulted in a very large increase in the number of Age 65+ women living alone beginning in 1970. And since we've already established that such women represent the lowest income earners in the United States, the large increase in this segment of the population caused the amount of income inequality measured among U.S. families and households to begin increasing in these years: 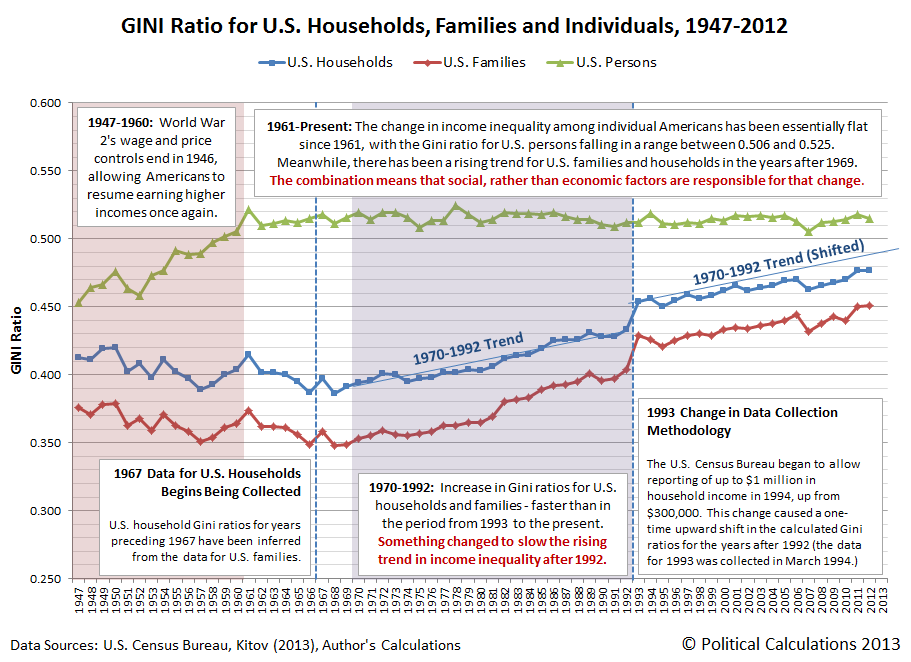 The Women Who Survived the War

How do we know that it was an increase in the number women over Age 65 living alone who drove the rising trend in the amount of income inequality observed among U.S. families and households? After all, that change would also be occurring at the time in which the very large Baby Boom generation, who had been born beginning in 1946, would also be moving out from their parents' homes and setting up their own households in increasing numbers after leaving high school or college.

The difference between these different groups is their income. Almost all baby boomers leaving home or school and establishing their own households would be working and earning wages or salaries, which would put them much higher in the income spectrum for all American income earners, as we showed in our earlier chart showing the median incomes earned by typical one or two-person households.

But the vast majority of women Age 65 or older living alone wouldn't be working - not at that point in their lives. They would instead be drawing upon Social Security benefits for their income. And as it happens, we can demonstrate that the annual amount of income collected by the typical recipients of Social Security benefits is fully consistent with the median income earned by women without wage or salary incomes: 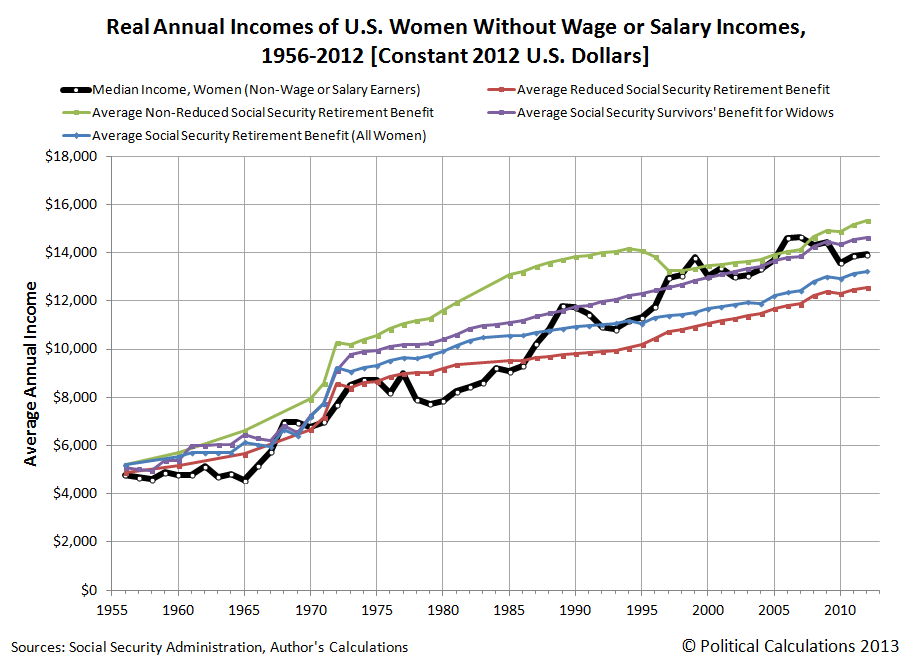 And since Social Security benefits are typically paid to individuals over Age 65, that means that we're looking specifically at the population of women who were the direct contemporaries by age for the men who died in the Second World War.

From there, it is the combination of a large increase in the share of U.S. households consisting of elderly women living alone and their very low incomes that allows us to single out this group as being the primary driver of the rising trend in income inequality among all U.S. households and families. Here, without changing the distribution of income earned by individual Americans, we can account for much of the observed increase in the years after the 1960s. Simply recognizing that the number of Americans at the very lowest end of the income spectrum increased is enough to account for much of that change, given how the math behind the Gini coefficient works.

The men who weren't there also explains why the increase in the income inequality among U.S. families and households shifted to grow at a much slower pace after 1992 (or really, 1993, if you want to include the smaller impact of the 17-year olds who were allowed to enlist to serve in World War 2 in 1945). Men who were 17 or younger in that year were much more likely to survive to reach Age 65, which explains why the percentage share of women Age 65 or older living alone begins to fall and the percentage of men Age 65 living alone increases after 1992, as shown in our third graph above.

Obviously, there's more to the story of why the amount of observed income inequality among U.S. families and households has increased in the years since 1970, as the men who didn't survive World War 2 only accounts for one of the factors behind the changing composition of U.S. households that have driven that change since that time. Higher divorce rates, the increase of out-of-wedlock births and the expansion of the welfare state enabled much of the increase in single income-earner households that combine to explain virtually all of the increase we observe in income inequality among America's families and households since 1970.

But it was the lasting impact of the men who died in World War 2, and the women who survived them to go on to populate the very lowest end of the American income spectrum that explains why it started and also a good portion of why the distribution of income in the United States has evolved as it has.

To us, it's more remarkable that so many economists and politicians insist on focusing on the opposite end of the income spectrum in attempting to blame the highest income-earning Americans for that increase. It's much like the con artist's or magician's trick of misdirection, where they're trying to conceal what really happened in using deceptive means to distract attention away from it, so the uneducated and misinformed buy into such a flawed perception of reality.

That their latest "solution" for that poorly conceived problem has already been shown to be utterly useless as a result is likely lost upon them.