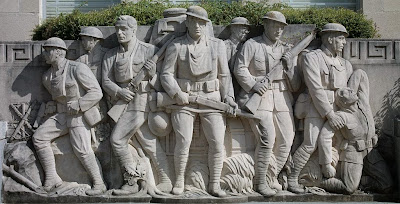 Since we've been surveying the performance of the U.S. stock market of a hundred years ago this week, we thought we'd take a moment to point toward the source data that we've been using for this particular project.

First and foremost, data for the historic level of U.S. stock prices, trailing year dividends per share, trailing year earnings per share and inflation data are all available through our tool The S&P 500 At Your Fingertips, which incorporates modern data that we've collected in real time for the S&P 500 index along with historic data previously compiled by Robert Shiller (Excel spreadsheet) from original sources such as the Cowles Commission. Their work is why we are able to present data for the S&P 500, or really, its predecessor indices and component companies before 1957, which is when the S&P 500 index officially came into existence, going all the way back to January 1871.

The S&P 500 At Your Fingertips tool also calculates historic rate of return data for the index between any two calendar months since January 1871, both with and without the reinvestment of dividends and with and without the effect of inflation. If you're curious to see how a hypothetical investment would have performed between any two of those calendar months, our tool Investing Through Time will do the math for you. And if you're a glutton for investing punishment, we have another tool, Investing Through the Worst, that can show you how your hypothetical investment in the S&P 500 would have performed through the worst stock market performance ever recorded.

Of course, there's more to stock market returns than just investment performance. Taxes can also greatly influence investment decisions, not to mention the performance of the entire U.S. economy, and the years surrounding World War I were greatly, and negatively, influenced by the introduction of the income tax in the United States following the ratification of the 16th Amendment to the U.S. Constitution in 1913. We obtained the data for the rates that applied for different income levels during the years since from the Tax Foundation, whose Federal Individual Income Tax Rates History, Nominal Dollars, Income Years 1913-2013 (PDF document) was invaluable.

Speaking of economic performance, we also utilized the National Bureau of Economic Research's chronology (Excel spreadsheet) for the history of U.S. Business Cycle Expansions and Contractions. We also referenced U.S. trade data during this period, as recorded in the United Nations' International Trade Statistics, 1900-1960 (PDF document), since U.S. exports surged during the pre- and post-World War 1 period, which worked to keep the U.S. economy out of recession during much of this period, as well as Gene Smiley's 1993 work, The American Economy Prior to 1920 (PDF document).

The elephant in the room, so to speak, is World War I itself. The U.S. National World War I Museum provides an Interactive WWI Timeline (Online application), which allowed us to identify the war's major events from the U.S. perspective.

Finally, we also tapped the history of the U.S. Federal Reserve, which came into existence during this period of time, but which turned out to not be a significant factor as the war started, but which became a major factor as time progressed and its ability to control the money supply in the U.S. grew - particularly as its policies were responsible for putting the U.S. through two recessions following the war as the Fed sought to squelch the wartime inflation it had been too impotent to control during the war's early years. Two sources were particularly useful here: David C. Wheelock's The Fed's Formative Years: 1913 to 1929 (Online document) and Phil Davies' Federal Reserve's Role During World War I (Online document).