Political Calculations
Unexpectedly Intriguing!
25 May 2016
The Amazing and Increasing Productivity of American Farmers

Not long ago, we came across a data source that provided over 150 years worth of nominal price data for wheat crops grown in the U.S., which we recently visualized.

But more than that, it also provided some very remarkable data on the production of wheat over the 15 decades from 1866 through 2015. Data that captures the story of great advances that have been made in U.S. agriculture over the last 60 years, which is what we'll explore and visualize today!

First up, let's consider the amount of wheat that is harvested annually. The following chart counts up the thousands of bushels of wheat that were harvested from 1866 through 2015 in just one state, which has gone from nearly 1,292,000 bushels in 1866 to figures that have consistently ranged between 200 and 388 times that figure over the last 40 years. 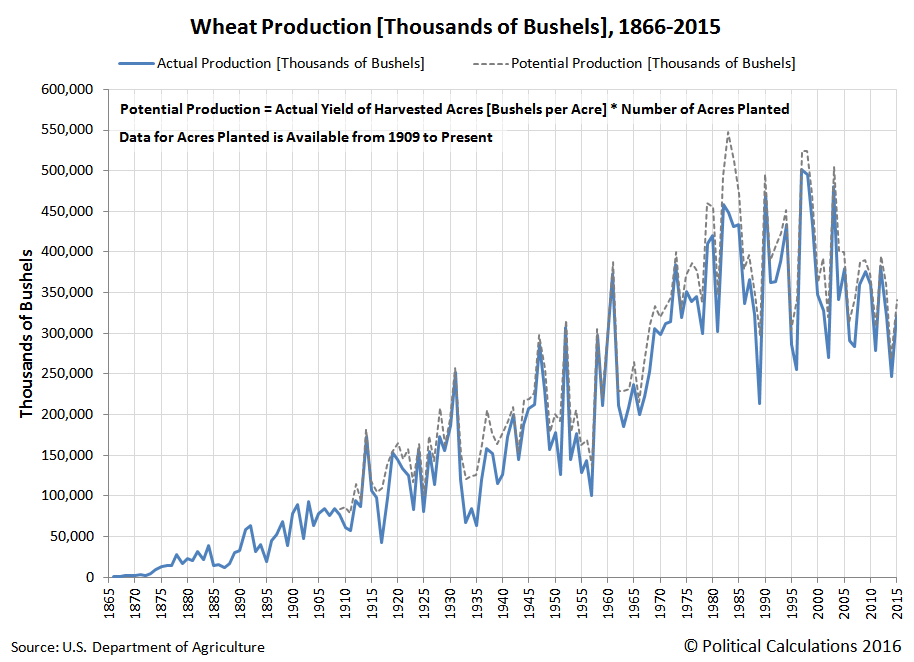 At the same time, over the period since 1909 when data for the number of acres planted is available, we see that the gap between potential and actual wheat production has narrowed. The next chart shows what we'll call the harvest efficiency of the acreage of wheat planted each year, which we calculate as the percentage of acres harvested to acres planted. 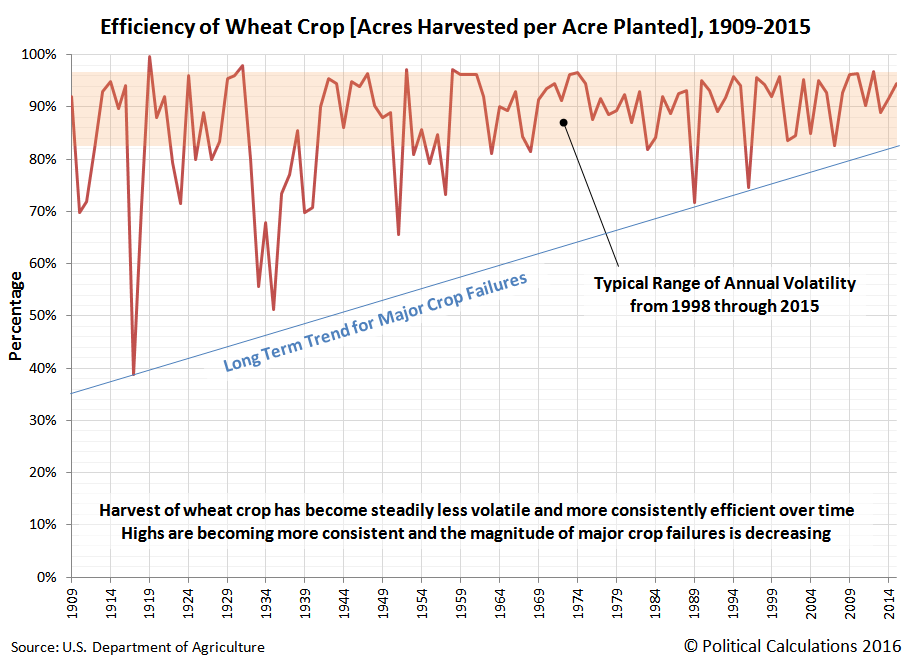 In this chart, we see that U.S. farmers have become better over time in avoiding major crop losses, often as a consequence of severe droughts, where the trend is clearly one of great improvement. At the same time, the most recent years show that the amount of volatility in annual harvest efficiency has become greatly reduced during just the past 20 years, which is especially remarkable given that 2012 saw the most severe drought conditions across much of the wheat producing section of the United States since the 1950s.

But here's the real story that's hidden in this data: the rapid rise of the yield of wheat per acre. From 1866 through the mid-1950s, the typical yield for harvested wheat ranged between 9 and 20 bushels per acre. After 1955 however, it has risen to where it now ranges between 24 and 48 bushels per acre. 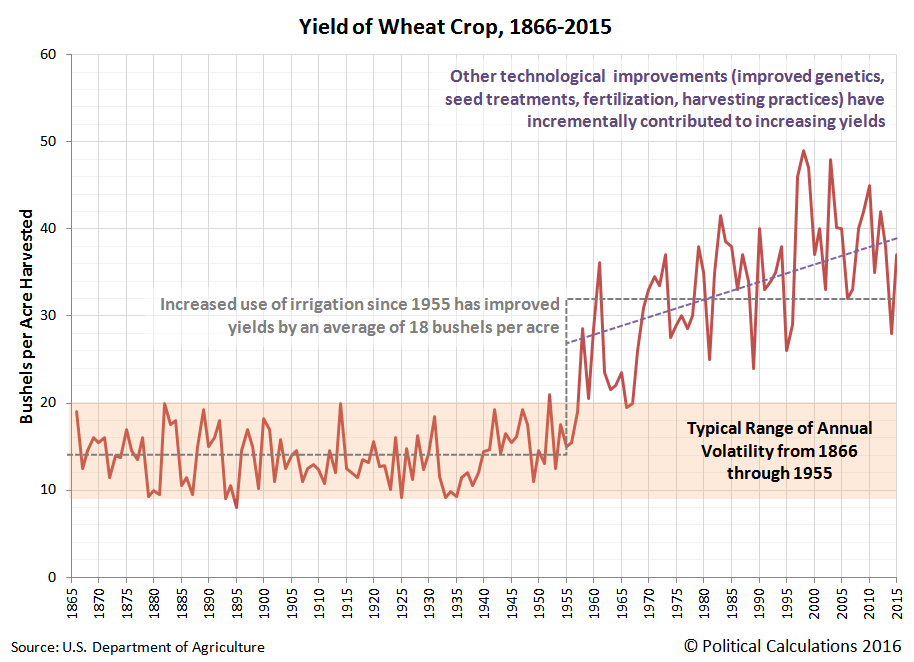 There is one big factor behind this change, and a lot of other factors that have combined to produce this result. The big factor is the development of infrastructure for irrigating crops, which are estimated to have increased the yield of wheat by 18 bushels per acre in the years since 1955. By minimizing losses to periodic drought conditions, the expansion of irrigation technology to improve wheat crop yields largely accounts for the reduction of volatility in annual harvest efficiency.

At the same time, an ongoing series of incremental improvements in other agricultural technologies, including seed genetics, seed treatments, fertilization methods and improving harvesting methods, have all combined to incrementally increase the yields of wheat harvested over time.

Those rising yields have also produced another benefit. Increasing yields and efficiencies has made it possible for wheat farmers to reduce the amount of acreage they plant. 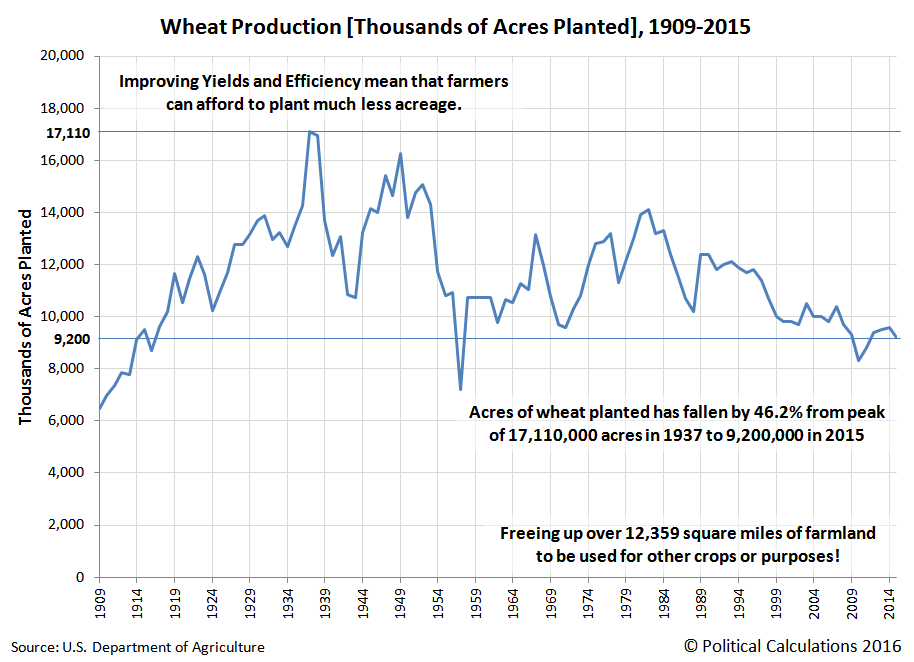 That increase in productivity has allowed land that had been tied up in farming wheat to be used to grow other crops or to be used for entirely different purposes.

And it's not just wheat. Many other crops have seen even greater improvements in their yields and harvest efficiency.