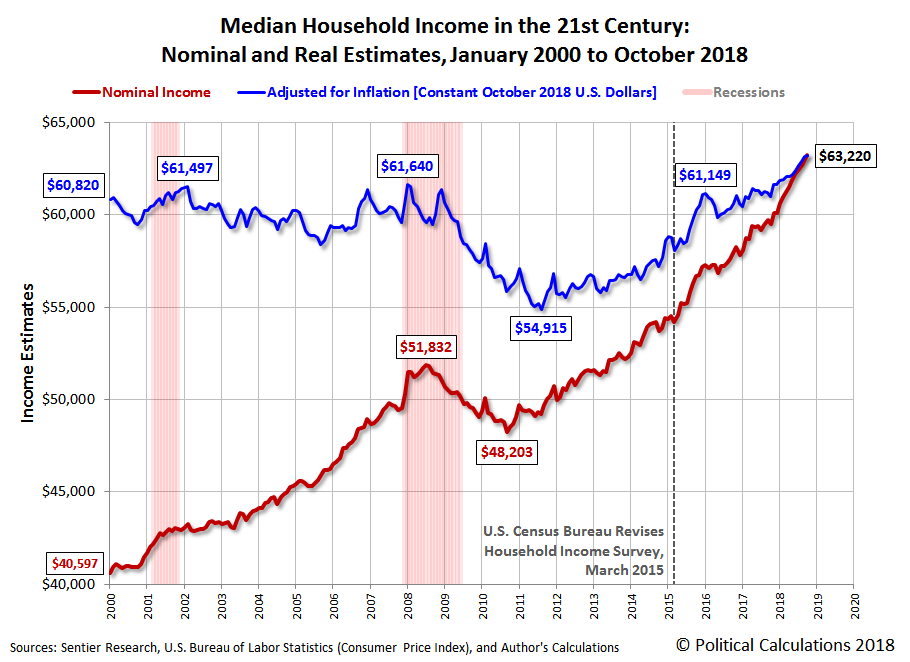 The single biggest takeaway from this chart is the growth streak that median household income has achieved during 2018. Since nominal median household income last saw a downtick in December 2017, in both nominal and inflation-adjusted terms, the income earned by the typical American household at the middle of the distribution of income in the United States has now set new record high values in each of the last ten months.

At the same time, the year-over-year growth rate of median household income in the United States has started setting record high values as well, in nominal if not inflation-adjusted terms. The next chart shows this data from January 2001 through October 2018. 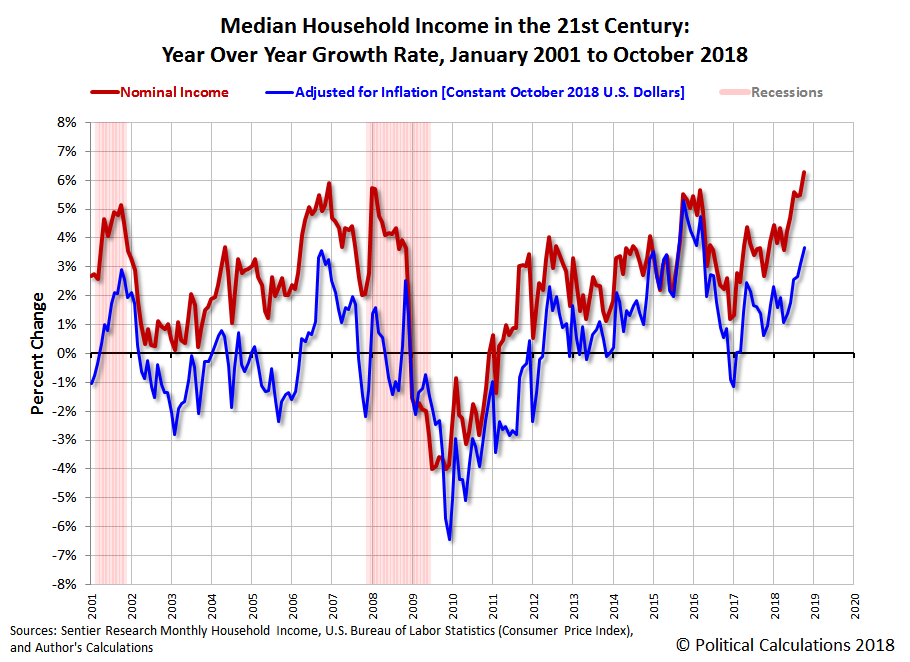 Don't you hate running into a limit like that? What if we could telescope the estimates for monthly median household income to go further back in time?

That's something we can do, where we simply need to apply the alternative method we developed for estimating monthly median household income in the U.S. that we developed to fill the gap for this data when Sentier Research suspended their income data reporting in the months between May 2017 and March 2018.

The following chart illustrates the model we can use to estimate median household income in the era before Sentier Research's coverage begins, where the relationship provided by the data from January 2000 through March 2015 (shown in orange), is what we would test out with the monthly data that precedes Sentier Research's estimates. 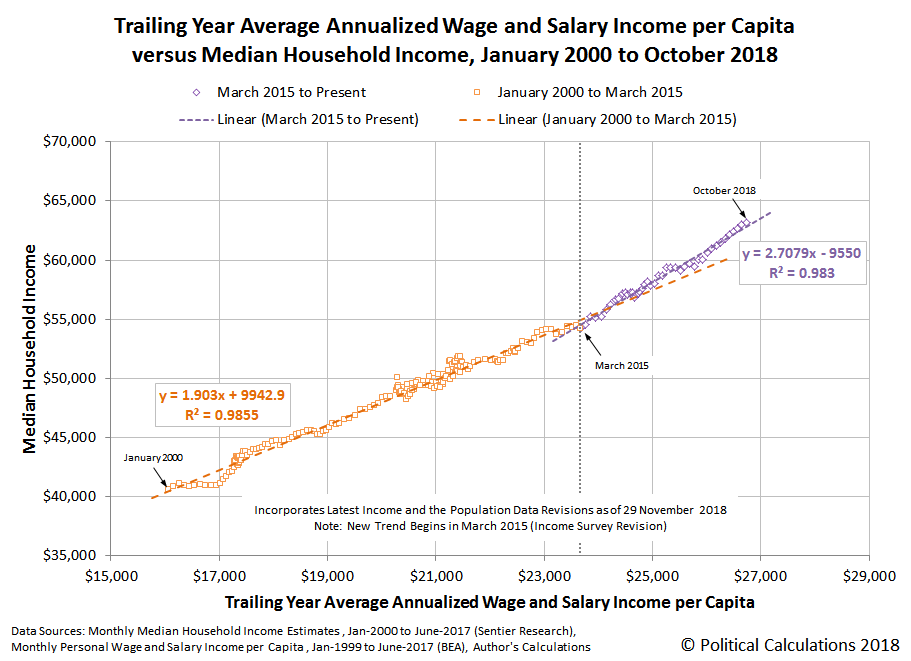 In using that data, we would expect to have a larger error in our estimates than we have had with Sentier Research's monthly estimates, simply because we're estimating income at intermediate points of time from when the Census Bureau samples its annual data. But we reasoned that so long as we can produce estimates using our alternate method that fit within the error range our estimates have with the annual data over the period where we can cross-check it with Sentier Research's estimates, we should be able to produce reasonably accurate results.

So that's what we did. We found the results for our alternate method, which is based on actual data from January 2000 through March 2015, can reliably estimate monthly median household income all the way back to January 1986. 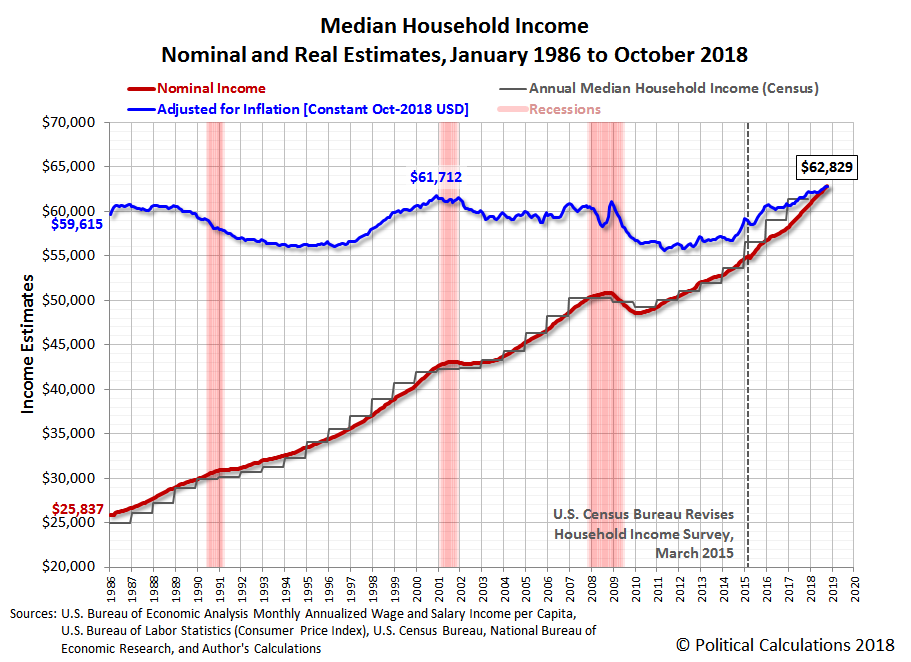 We didn't have to stop there, except that we found that the differences between our modeled results and the U.S. Census Bureau's annual median household income estimates grew unacceptably large in the period preceding January 1986.

We later identified the reason why. The survey that the U.S. Census Bureau used to collect income data from American households underwent a significant revision that was implemented in March 1987, where the data reported for the 1986 calendar year was both the first to be based entirely on households selected from the 1980 Census-based sample design rather than the 1970 Census-based sample, and also a larger number of smaller sampling areas. The March 1987 survey was also the first to collect a more detailed level of household income data for higher income earning households, but that impact would be relatively minor compared to the other changes in the survey's methodology.

As we saw with the effects on reported median household income following the March 2015 revision to the U.S. Census Bureau's income survey, the Census Bureau's estimates for the period preceding 1986 are very different from what came after - the accuracy of the model we developed based on the available monthly data we have from January 2000 through March 2015 breaks down.

In any case, what we've done is enough to nearly double the amount of data that's available to describe the trajectory of median household income in the U.S. on a monthly basis, which we can now provide from January 1986 through the present. And if we keep working at it, where we have some ideas for how to telescope the analysis even further back in time, we may be able to get all the way back to 1959 - nearly a decade before the Census Bureau even began reporting its annual estimates of median household income.

And that's how we're celebrating our anniversary today! [If you want summarized links to our data sources and references, keep scrolling down past the "anniverary" section.]

References for Median Household Income From January 1986 Through October 2018