The fifth week of the coronavirus pandemic within the United States has seen signs that the spread of the viral infection is slowing within several states that have previous reported a high percentage of cases, while other states and territories are seeing very slow growth in their number of confirmed cases.

Here's what the daily progression of cumulative COVID-19 testing, confirmations, hospitalizations, and deaths look like when tracked at the national level in a tower chart over the four weeks from 10 March 2020 through 14 April 2020. 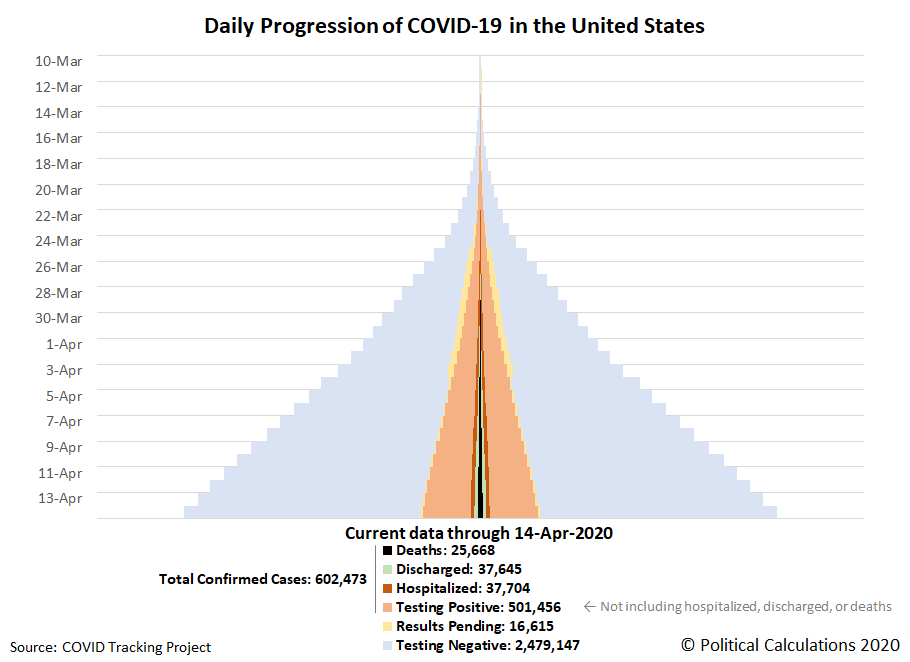 The national tower chart of the daily progression of COVID-19 in the U.S. shows a greater level of detail than we've previously presented, where we can now break out COVID-19 patients who have been discharged from hospitals, which reveals the number of hospitalizations for serious cases has begun to decline. At the same time, the overall number of less serious cases evidenced by the number who have tested positive continues to rise at a slower pace, while the number who have tested negative is growing rapidly with the increased volume of testing.

The number of deaths attributed to COVID-19 infections has also increased, although there are quality issues affecting how these deaths are being recorded.

The spread of the COVID-19 has been particularly concentrated within several regions of the United States, which becomes very evident when we present the daily progression of COVID-19 over the first five weeks for which we have numbers for confirmed cases, hospitalizations, discharges, and deaths at the state or territory level in the following skyline tower charts, where you can start to see some of the improvements that have begun to take place. Each of these charts span the same period of time and the width of each corresponds to 1.5% of each state or territory's population, making it very easy to see which states and territories have been most impacted and which have been the least impacted through the first five weeks of the coronavirus epidemic in the U.S., especially since we've ranked them from the highest percentage of infection within the state's population to the least as you read from left-to-right, top-to-bottom.

For each state or territory shown above, if you add the number of deaths, discharges and hospitalizations listed for 14 April 2020, you'll have the cumulative hospitalizations through that date.

If you look at the top row of the chart, you can see the growth in cases in New York is showing some signs of beginning to slow, which has capture media attention, but not anywhere near as impressively as Louisiana.

Louisiana's chart reveals the trend we want to see develop, where instead of building a pyramid with a widening base of confirmed coronavirus infections, each state's tower chart instead looks like a skyscraper whose sides are both narrow and vertical. The states that achieve the corresponding very slow rate of spread that goes with this pattern will be among the first that may lift any statewide restrictions they may have placed on activities and businesses.

Of all the regions that have been hardest hit within the U.S., the state of New York continues to stand apart as having experienced the greatest incidence of coronavirus infections. Here's a more detailed look at its coronavirus-related data: 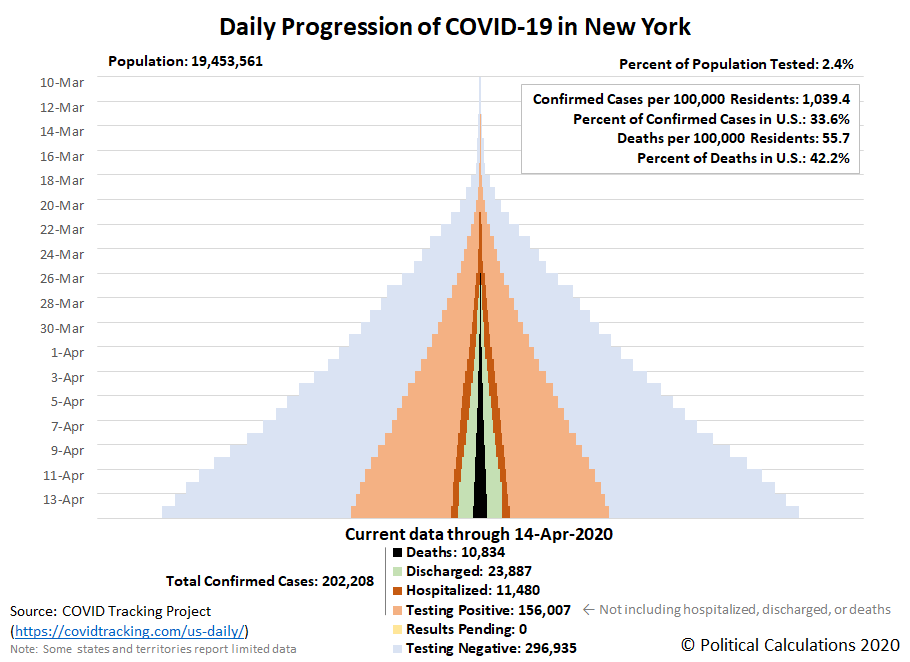 Within the state, New York City and the surrounding counties that make up its greater metropolitan area have the greatest concentration of confirmed coronavirus infections within the state. 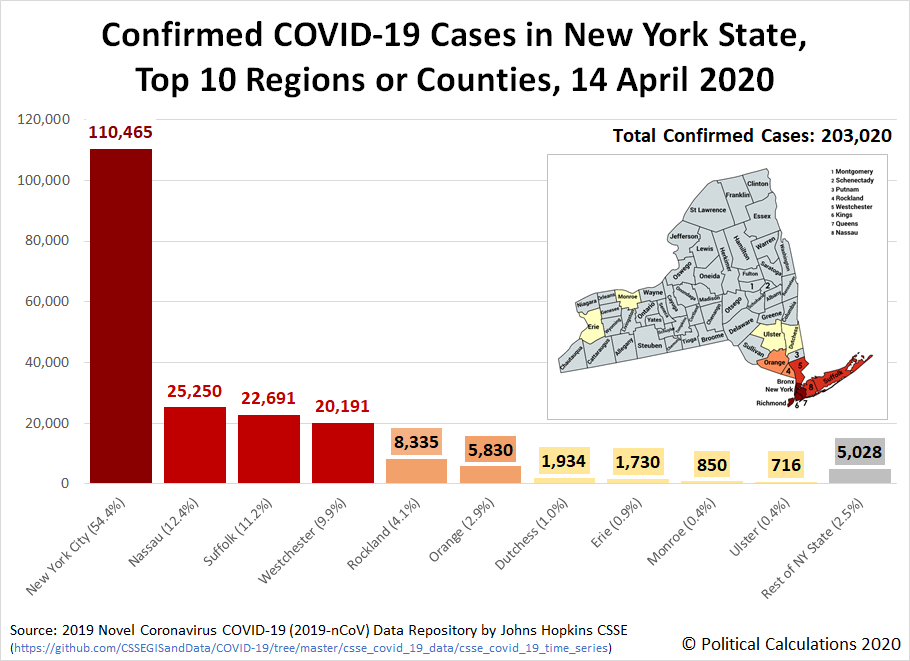 The region of New York City includes Bronx, Kings, New York, Richmond, and Queens counties. The most affected counties are adjacent to New York City. On the opposite end of the inspection, New York has four counties that through 14 April 2020, have only reported single digit numbers of confirmed coronavirus infections.

Why is New York's situation with the coronavirus so bad? The New York Times points to the poor judgment of government officials, including Governor Andrew Cuomo and particularly New York City Mayor Bill De Blasio. Their grave mistakes greatly amplified the poor judgment and sluggishness of bureaucrats in the Centers for Disease Control and the Food and Drug Administration, who the New York Post reports failed to treat the rapidly developing crisis like a rapidly developing crisis.

The very low concentration of cases in other parts of the state make the statewide restrictions imposed by Governor Cuomo highly questionable in that they are producing relatively little benefit at great cost to those subject to them. For example, the inequality in the geographical incidence of infection has allowed Governor Cuomo to divert medical resources from them to the New York City metropolitan area, in part to compensate for Mayor De Blasio's fecklessness, but with no compensating benefit, in that the residents of these regions of the state are still subject to the governor's statewide stay-at-home orders, while businesses in these regions are still subject to the governor's statewide closure orders.

The longer that situation continues, the greater the abuse of power becomes.

Here's a very short guide to some of the data visualization we've featured for tracking the spread of the coronavirus epidemic in the United States: