The story of what happened to the S&P 500 (Index: SPX) in the past is a simple one. After running into President Biden's wall of inflation the previous week, the index plunged into bear market territory. Through the end of the trading week ending 17 June 2022, the index was 23.4% below its 3 January 2022 record high peak. 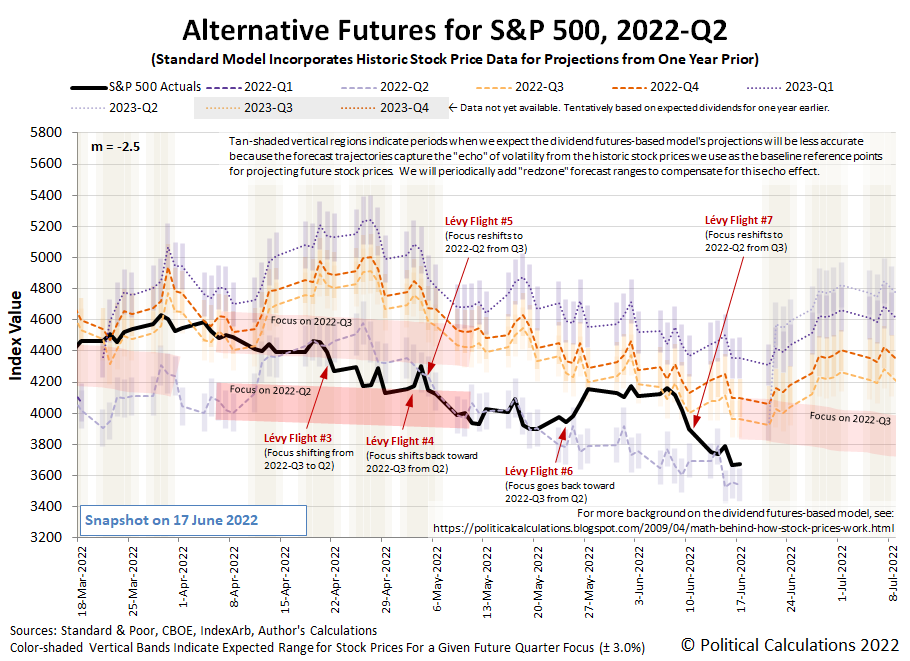 From our perspective, after the May 2022 inflation report came in higher than expected, investors sent the S&P 500 lower in a new Lévy flight event, the seventh of 2022, as investors scrambled to shift their attention back toward 2022-Q2 from 2022-Q3. But with the expiration of 2022-Q2's dividend futures contracts on Friday, 17 June 2022, the market has effectively entered 2022-Q3, even though the calendar quarter won't click over for another two weeks.

We think investors will, once again, shift their forward-looking attention toward 2022-Q3, because what actions the Fed will take next as it scrambles to get ahead of inflation will hold the focus of investors on this quarter. We've updated the alternative futures chart to add a new redzone forecast range to indicate where stock prices will likely go during the next several weeks, also assuming no deterioration of expected dividends or outbreaks of noise in the market.

In the very short term, that redzone forecast range suggests a higher level for the index, but one that could be relatively short-lived. We peeked ahead at the dividend futures-based model's projections for 2022-Q3, and see that the redzone range continues to drop to roughly where stock prices are today.

We can also confirm the bubble the Federal Reserve inflated for the S&P 500 through its coronavirus pandemic response has now fully deflated. We'll explore the data supporting that assessment later this week.

Here are the market-moving headlines in the week the Federal Reserve was forced to hike the Federal Funds rate by 0.75%, its largest rate hike since 1994.

The Atlanta Fed's GDPNow tool turned even more pessimistic in the past week. Its forecast of real GDP growth of 0.0% for the U.S. in 2022-Q2 is down from last week's projection of 0.9% annualized growth. If that holds, it suggests the U.S. economy is in the midst of experiencing two consecutive quarters of real GDP shrinkage, which many people associate with the economy being in recession.