We're going to wrap up our look at how the distribution of inflation-adjusted income has changed by age group from 1995 to 2005 this week, so we thought we'd start the grand finale by looking again at the generational demographics of our income earners in both years.

We'll first look at where our age groups fall among the United States' generational divisions, going by registered births, first for 1995: 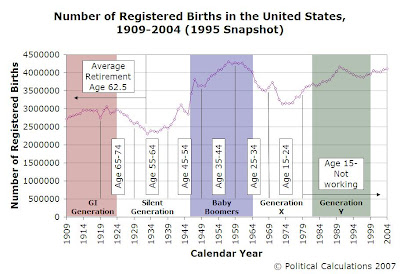 So, right off the bat you can see that there's a strong generational component behind the number of potential income-earners in each age group as they advance through time, which is in good part reflected by the number of registered births within our age ranges. The following table adds up the birth numbers, and lists the number of income earners between $0 and $95,000 (in 2004 US dollars) for both 1995 and 2005:

Note: We highlighted the number of income earners for birth years between 1970 and 1979 (specifically, 2005's Age 25-34), since this figure is actually larger than the number of registered births for those years. That's very likely a lot of immigration inflating the numbers of the domestic U.S. workforce!

In addition to the provided data, the table above also indicates why we selected the years of 1995 and 2005 for our income distribution analysis. Since the Current Population Surveys released in March of these years really reflect data captured for 1994 and 2004, and given how the CPS provides its age group breakdowns beginning with Age 15-24 (and so on), these years made a nice natural fit with the decades for when people within each age group were born!

And you thought we were going completely at random!...