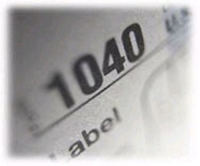 Since our expertise revolves around creating web-based tools, we replied that unless Fred had a tool to go along with his proposal, we wouldn't be reviewing it. But, as it turns out, there was a tool, in the form of an Excel spreadsheet (more details here.) But no actual made-for-the-web version which, in this day and age, just won't fly.

So we offered to take it on as a project, which happens to turn out to be pretty timely as the Wall Street Journal really likes Fred's plan. A lot. So here we go!

Beyond the standard deductions outlined above, Fred Thompson's tax reform plan includes a $3,500 personal exemption for each individual covered by the filer's tax return, increasing the amount of income that will not be subject to income taxes. For example, a family of three people would be able to reduce the amount of their taxable income by $10,500 (3 X $3,500).

The tax rates that would apply to taxable income under Fred Thompson's simpler tax proposal, as well as the portion of taxable income to which they apply, are presented in the table below:

That's it! That's Fred Thompson's entire proposal for making income taxes much, much simpler to do!

Ready to See What Filing Your Taxes Would Be Like?

The next step is to see what might happen to your taxes if you filed what we're calling Form 1040-FRED. To make the best comparison between how your taxes come out under Fred Thompson's proposed reform and the currently available options under the existing income tax code, it wouldn't hurt to have your most recent tax return handy for reference, although it's definitely not required. To use the tool, just enter the indicated information below (any data you enter and results you get will stay entirely within your web browser):

By sharply increasing the standard deduction to reduce the amount of a taxpayer's taxable income and significantly lowering the rates at which that income is taxed, Fred Thompson's proposed income tax reform would benefit a broad spectrum of lower and middle-class taxpayers compared to the option represented by the current tax code. The proposed reform is substantially better for those who are not eligible for many of the deductions and tax breaks that exist in the current tax code, while being on par to slightly better for those who are eligible for the most common of those available deductions.

Those eligible for the Earned Income Tax Credit (EITC) however may benefit more by filing their taxes using one of the existing IRS income tax forms, such as Form 1040-EZ. EITC beneficiaries receive a tax credit that allows them to offset a significant portion of their payroll taxes, such as Social Security and Medicare (or FICA), which often represents the largest component of federal income taxes that they pay. That benefit may be significant enough to justify using one of the more complex tax filing options available under the current tax law that would still exist if Fred Thompson's proposed tax reform becomes law.

Meanwhile, those at the highest incomes would likely benefit more by filing their taxes using the options available under current law to exploit the ever-growing complexity and highly selective special-interest provisions of the current tax code. The current tax code is, of course, carefully crafted by Congress so they can.

Finally, before we return to our regular programming, we thought we'd offer two tax-related facts for all the Fredheads out there, courtesy of Frank J:

Taxes get so depressed when they hear Fred Thompson is in charge that they cut themselves.

Not only does Fred Thompson cut taxes, he cuts tax collectors.

No, we couldn't resist.... However, if you would like to know more about Fred Thompson's tax-related policy proposals, his web site has a white paper outlining them.

To the best of our knowledge, we don't work for Fred Thompson, or his campaign, or anyone related to Fred Thompson or his campaign. We did this for fun and because we can! And please note, we haven't taken a position regarding whether we support, are on the fence with, or do not support Fred Thompson's simpler income tax proposal. The tool is here to help you decide what you think of it!

Other Tax-Related Stuff at Political Calculations

Your 2008 Paycheck
Our tool for finding out what's left of your paycheck after Uncle Sam has gotten his dirty, stinking ape paws all over it!
Investing Choices and Income Taxes in 2008
Should you invest in a taxable or tax-exempt investment? Our tool can help you choose which is better for you.
Review: Rudy Giuliani's 1040-FAST Tax Form
Our review of the tool demonstrating what filing taxes might be like if Rudy Giuliani were President....
Bruce Bartlett on the Fair Tax, and Race

How much money is there to be made from bootlegging products from a lower-tax state to a higher-tax state, and not paying the higher taxes? Our tool does the basic math to find out under what conditions bootlegging can be profitable.

What was filing income taxes like back in 1913 after income taxes were made constitutional by the 16th Amendment? Our tool does the math!
What if the Death Tax Were an Income Tax?

How much would income taxes go up if instead of taxing estates after an individual dies, we made them pay higher income taxes when they were alive? Our tool takes on that question.
Measuring the Growth of the U.S. Tax Code

Way outdated, as the tax code is now well over 66,000 pages, but our 2005 post will give you an idea of the trend in recent years.
Revisiting the Lottery

How big does the jackpot need to be to justify the cost of buying a lottery ticket? And how much bigger does it need to be to take the taxes you'll have to pay on your winnings into account if you do win? One of our more popular tools!

How Much Do you Pay in Gas Taxes?

Our tool finds out how much of what you pay to fill your tank goes to taxes each year.
A Brief Overview of Taxes for Social Security

A straightforward look at where all the money comes from that goes to support Social Security.