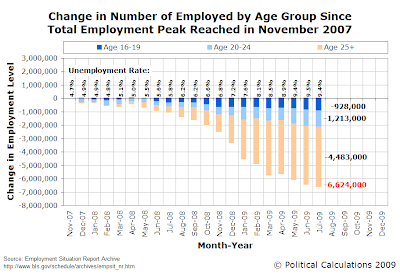 Of all the 6,624,000 jobs that have disappeared from the U.S. economy since the current recession began in December 2007 through July 2009, nearly one-third have been those previously counted as being held by individuals between the ages of 16 and 24. Teens (Age 16-19) account for 14.0% of the total job loss since total employment in the U.S. peaked in November 2007, while young adults (Age 20-24) represent 18.3% of the total number of jobs lost.

In the chart above, we've added data to indicate the official unemployment rate for the U.S. for each month since the current recession began. Remarkably, even though the official unemployment rate for the U.S. civilian workforce sits at 9.4% in July 2009, the same as for May 2009, well over half a million jobs have disappeared in the two months that have elapsed. July's reduction in the level of total employment in the U.S. since November 2007 is 6,624,000, while in May 2009, that figure was 6,095,000, the difference being 529,000.

Those figures confirm that the number of people either employed or actively seeking work in the civilian labor force has declined substantially over the past two months. Mathematically, the only way the unemployment rate can remain stable when an increased number of jobs are being lost in the economy is for a large portion of individuals without jobs to stop actively seeking work. 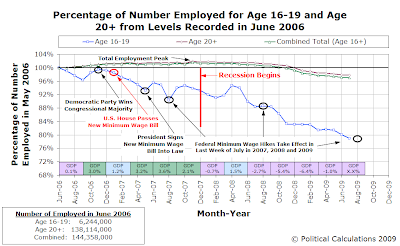 That's especially remarkable given that a third of that job loss occurred before the current U.S. recession began in December 2007, at a time when the U.S. economy was steadily growing at a healthy pace. Recently revised real GDP growth data reveals that economic growth was positive throughout 2007, with real GDP rising at rates of 1.2%, 3.2%, 3.6% and 2.1% for each of the year's quarters.

But then, the reason why really isn't much of a mystery!

The employment data we've presented in this post is taken from the BLS' Labor Force Statistics, which is derived from the U.S. Census' Current Population Survey.

The Wall Street Journal features an article on the plight of the unskilled teenage job hunter, who's finding tough competition for today's dwindling supply of higher minimum wage-earning jobs from people who offer more productivity for the money to their economically-distressed employers.