Now that we have all the data for December 2009, we now update our preliminary prediction for where the average value of the S&P 500 will be in January 2010!

Which is almost a strange thing to say since that prediction post from back on 23 December 2009 was, for us, just two posts ago! 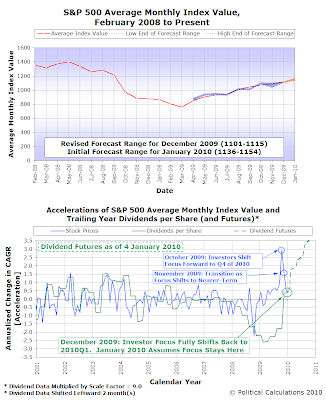 But what a difference those extra thirteen days of data make! Using our dead reckoning forecasting method, where we have observed changes in the expected growth rate of the stock market's dividends per share drives stock prices much like trade winds drive ships at sea, we would now anticipate that the average daily closing price for the S&P 500 in January 2010 will fall between 1131 and 1165.

Our combined our forecasting and accelerations chart show how we expect January 2010 to play out. Here, after successfully forecasting where the S&P 500 would be for December 2009, we anticipate that investors will remain focused in the short term on where the S&P 500's dividends per share will be by the end of this first quarter of 2010.

We expect that focus to change however, especially as we get closer to the one-year mark of the bottom the stock market reached in March 2009. Our long term readers will recall that we used our then newly-developed stock price forecasting method to anticipate the level to which stock prices would fall six days ahead of when it did, then confirming the upward trajectory of the stock market just a week after the market bottomed as investors shifted their focus forward in time, neatly framing the bottom of the market!

In this case, we anticipate that investors will shift their forward-looking focus to either the fourth quarter of 2010 or the first quarter of 2011. Investors last focused their attention on the dividend futures for 2010Q4 back in October, coinciding with the one-year anniversary of the meltdown in the financial and banking industry.

In the meantime though, investors will seek the relative comfort and safety of keeping close to shore - maintaining their focus on how the change in the growth rate of dividends per share will be for the first quarter of 2010. Just as they did for most of 2009....

Note: So there's no confusion, while we correctly framed the bottom for the stock market, identifying the range to where it would fall then the range to which it would rise, we didn't call the bottom in March 2009 (we had thought we'd see that in February 2009 - we missed it by nine calendar days, or if you prefer, six trading days!) If you follow that link, you can follow our reasoning for why we opted for February, even though we recognized that there was an 80% probability of it occurring by the end of March.

What can we say? We're forecasters, not psychics! The best we can do is to anticipate where the market will actually go with a relatively small margin of error. Since we began making monthly predictions of where the average level of the S&P 500 would be each month in April 2009, even our biggest misses have been within a margin of 2.5% of the actual value, and that's not counting all the times the market finished each month within our forecast target range....