Now that the White House has released President Barack Obama's budget proposal for the government's 2012 fiscal year, we thought we'd update our look at how the future for federal spending has changed since George W. Bush was President.

Our frame of reference is what former President George W. Bush had proposed in his final budget proposal for the federal government's 2009 fiscal year, which projected what he envisioned for spending levels through 2013. We'll then compare that against the level of federal government spending that President Obama has proposed in his FY2010, FY2011 and the new FY2012 budget proposal that was just released on 14 February 2011.

The chart below reveals what we found: 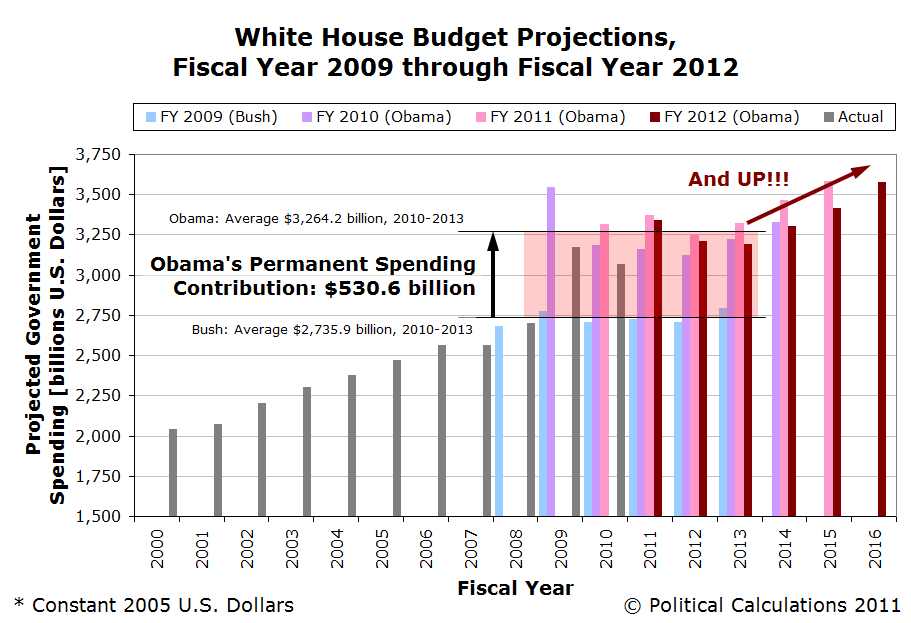 Compared the the amount of future federal spending that President Bush had envisioned in his final year in office however, we find that President's Obama's "restrained" FY2012 budget proposal marks an average permanent increase in federal government spending of 530.6 billion dollars when adjusted for inflation to be in terms of constant 2005 U.S. dollars.

That's a mild improvement over the $576.4 billion average permanent increase in federal spending we had calculated for the President's FY2011 budget. But then, the President's FY2012 budget proposal only looks like savings next to that budget proposal. By any real world measure, federal spending under Barack Obama continues to be considerably out of control.