Bloggingstocks' Joseph Lazaro outlined the theory that it might back on 1 August 2009, shortly after the U.S. federal minimum wage reached its current level of $7.25 per hour (emphasis ours):

... the U.S. Federal Reserve will be monitoring prices and costs to see if the higher minimum wage is creating inflation havoc at a time when U.S. businesses least need another concern to deal with. Businesses have enough to worry about; and some are struggling just to maintain operations for another quarter or two -- the recession has been that damaging.

But the Fed will also be looking for signs of another side-effect, and this one is a positive one: a GDP boost. That's because millions of workers are going to get a raise that they otherwise would not have gotten, and that will increase their purchasing power.

The significance? Some of those increased-pay workers will choose to spend -- perhaps buying a washer or drier, making a down payment on a used car, or paying down a debt. It's quite possible -- although in these "frugal consumer" economic times no one is certain- - that the wage hike will increase U.S. GDP, serving as a small engine of growth as the U.S. economy inches back toward health.

It's an intriguing possibility isn't it? But has it worked out that way?

One way we can find out if boosting the federal minimum wage has boosted GDP is by examining the economic fortunes of the people most likely to be earning minimum wages in the United States: teenagers and young adults!

Together, individuals between the ages of 15 and 24 have consistently made up approximately one half of all minimum wage earners, so we should be able to use the personal income data the U.S. Census has collected and published for this age group for each year since 1994. 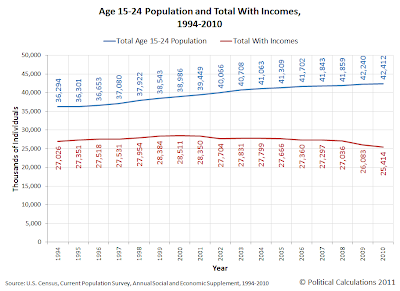 First, let's consider the population of 15-24 year olds in the United States, and the number of those individuals counted as having income from 1994 through 2010.

What we see however is that the number of teens and young adults with incomes has fallen over time. Our next chart shows the percentage of Americans between the ages of 15 and 24 who were counted as having income in the U.S. Census' Current Population Survey for each year from 1994 through 2010. 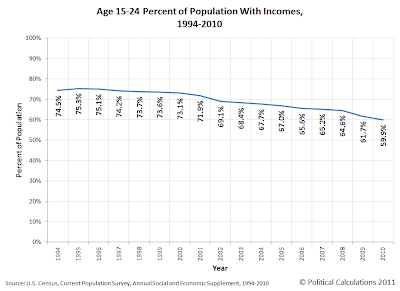 In this chart, we find that the percentage of teens and young adults who had incomes peaked in 1995, with 75.3% of the entire Age 15-24 population counted as having earned income in that year, which has since fallen to 59.9% as of 2010.

We'll also adjust the numbers to account for the effect of inflation, using an animated chart to show the results.

Let's take a step backwards and consider the nominal income distribution of teens and young adults in both 1995 and 2010 in nominal terms.

Our next animated chart shows how many thousands of Age 15-24 individuals the U.S. Census counted within each $2,500 increment of total money income in both 1995 and 2010.

Here, we find that the distribution of income has shifted primarily at the lower end of the income spectrum. Our final chart quantifies the changes for each of the U.S. Census' measured income increments. 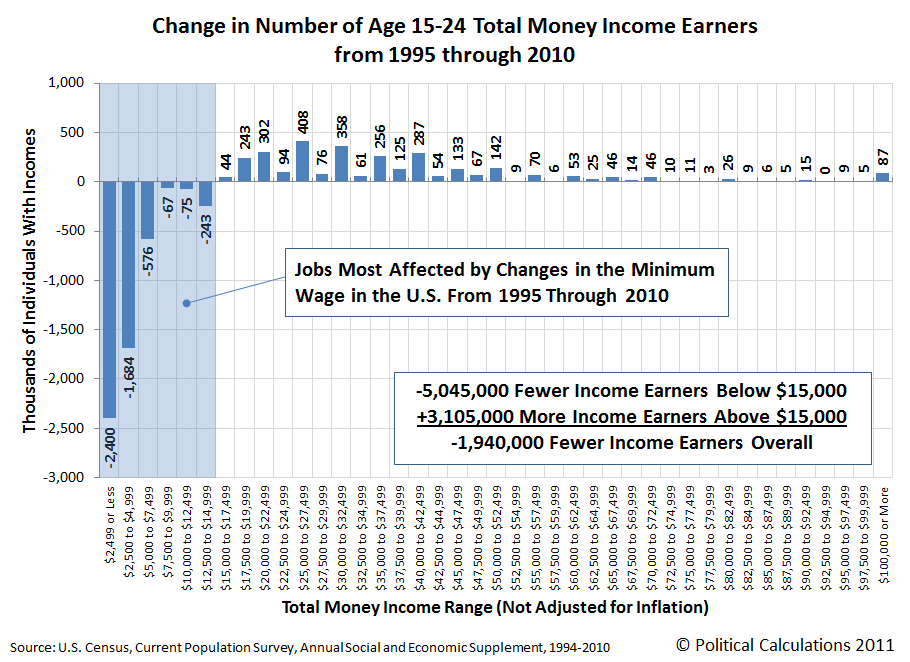 What we find is that this income range at the lowest end of the income spectrum for Americans between the ages of 15 and 24 is the only income range where there have been reductions in the number of individuals with incomes between 1995 and 2010.

Returning to Joseph Lazzaro's thoughts on the topic:

... if the Fed and other organizations can verify that the minimum wage increase has boosted GDP without a loss of jobs, or inflation, Congress may to consider another decision in the quarters ahead: a decision to raise the federal minimum wage again, this time to $8.25 per hour.

In our view, the only reason the U.S. Congress would choose to increase the federal minimum wage again would be to ensure the onset of a new recession.

This concludes our annual anniversary post, where we celebrate the biggest ideas we've developed during the past year! This year's anniversary post was a bit unique in that it combines two of the areas in which we've made a mark (or left one!): the real impact of minimum wages on the U.S. teen population and the real nature of income inequality in the United States.

As for the biggest ideas we've developed in previous years, here's the list:

Thank you for joining us for our anniversary! We appreciate that there are a lot of ways you can choose to spend your time, and we greatly appreciate your willingness to share so much of it with us over the past year.