How much money is the government of Greece capable of collecting?

That's the basic question behind economist Michael Rizzo's recent exploration of what he called the "Government Budget Identity" for Greece:

The "government budget identity" is simply a way to think about how a government can finance its expenditures. Suppose a government is required to help us build bridges and defend our borders – it requires funds to do this. A typical sovereign government can secure funds from three "legitimate" places. What are these sources?

So, this is what the government budget identity looks like for "normal" countries:

He then goes on to consider how that identity has come to only mean "G = T", where the amount of money Greece has available to spend is only what it collects in taxes today.

With that as the basic background then, Warren Meyer extended the discussion into what the math for Greece really looks like:

I think this is a useful simplification, but I wanted to add a couple other refinements (refinements by the way he did not neglect in his text, just did not put in the formula). One other source of funds we have seen in Greece is what I would call Aid, which used to be humanitarian aid (think India in the 1970s) but today tends to be bailout money and debt forgiveness. So we will write the equation

But due to the Keynesian orientation of many commenters on the Greek and European situation, it becomes useful to expand the "taxes" term into some sort of base income, which I will just call GDP for simplicity, and some sort of tax rate t. So then we get:

The Greeks can't print money (unless the EU does it for them) and at the moment no one in their right mind will lend to them without guarantees from stronger European countries (e.g. Germany). If we call EU money printing for Greece or EU loan guarantee programs Aid, we get

As Rizzo noted, aid is drying up and Greek tax revenues are going down rather than up, so basically they are screwed. The only out seems to be for Greece to exit the Euro and then, once on the drachma again, print money like crazy and inflate their way out of the debt.

It just so happens that we've been working on a different project where we've been playing with the OECD's, Eurostat's and Knoema's available data for Greece's GDP, total tax collections and total government spending for the years from 2000 through 2011. Putting those numbers together, and then putting them into a more human-oriented, "per Capita" scale by dividing them by Greece's population, allows us to produce the following chart: 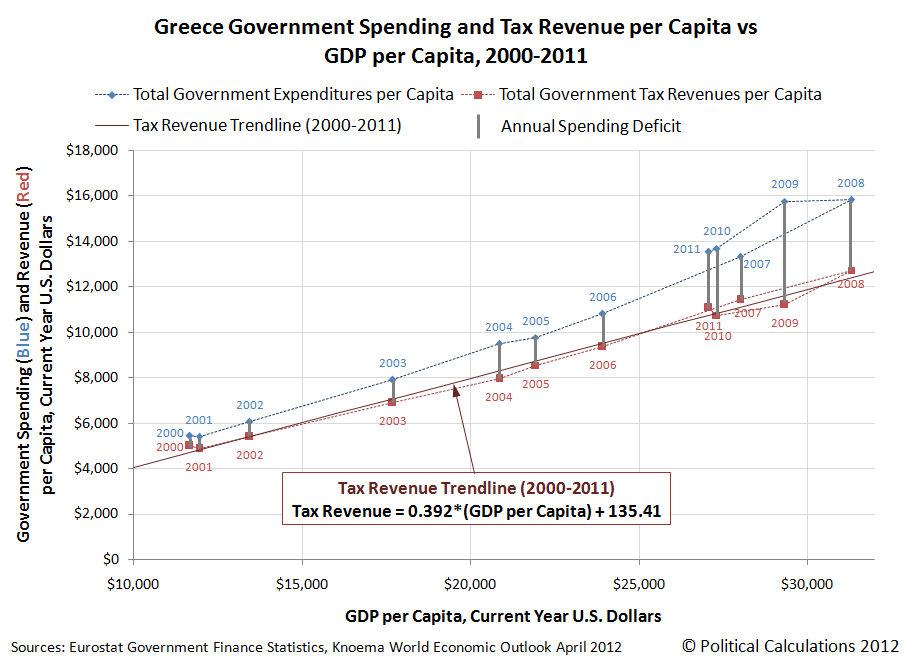 In this chart, we find that the Greek government is successfully taxing 39.2% of its GDP, while also taking in approximately $135.41 for each member of its population in the form of "aid", to reference Warren Meyer's "G = GDP * t + Aid" variation of Greece's "Government Budget Identity".

Now, notice how steady the data with respect to the Tax Revenue Trendline is throughout all these years. There is very little deviation from it in any given year. Now consider all that the Greek government has been doing to try to boost its tax collections over all this time, starting with its marginal "All-In" income tax rates, which are the income tax rates, plus Social Security-style taxes, less the money it hands back out to its people through its welfare-type programs: 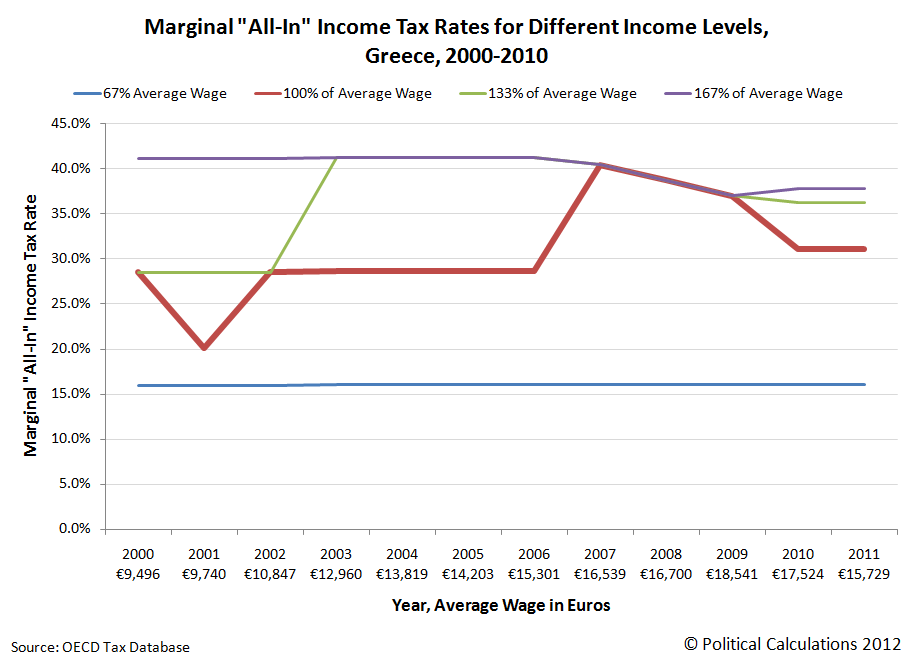 Here, we observe that significant tax rate hikes occurred in 2002, affecting people earning 133% of Greece's average annual wage, and upon middle-income earners after 2006. Although those tax rates have fallen somewhat since, all tax rates for the middle-to-upper income earners in Greece are higher than in 2006, supposedly three years *before* Greece's debt problems exploded.

In reality, and going back to our first chart, we see that a gigantic increase in annual government spending for each year from 2007 through 2009 is really what did Greece in. 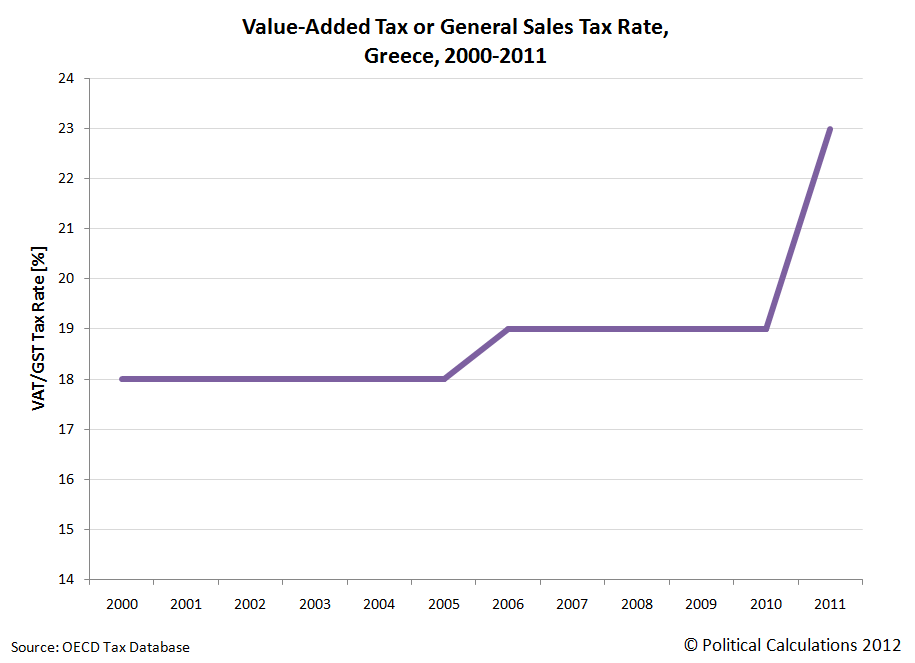 We're not kidding when we say that Greece's government really turned the screws on its people with its VAT in 2011. That 4% increase in the rate of taxation should have increased its revenue from the tax by more than 21%.

And yet, it's not, as even that massive tax rate increase has had little effect upon the Greek government's ability to actually collect more taxes from its people. For that matter, neither has its increased income taxes. It's as if Hauser's Law is alive and well on the Peloponnesian peninsula!

If only the people responsible for Greece's government's spending would learn to live within that limit....