Political Calculations
Unexpectedly Intriguing!
29 August 2014
How to Boost Your IQ With Science 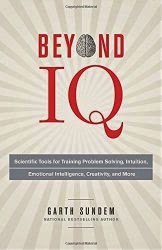 What if you could hack your brain to boost your IQ? Would you do it? How can you do it?

Garth Sundem, author of Geek Logik, one of our all time favorites, is back in print with Beyond IQ, which taps the expertise of today's top researchers in psychology for how to expand your mental abilities.

And all you need to get started is this book, a 9-volt battery, a couple of wires, a 2 milli-Amp resistor and two moist sponges to attach to your head and your left arm....

Seriously! At least if you're as serious as the U.S. Defense Advanced Research Projects Agency (DARPA), which has used a device that's just a little more sophisticated than the one you could make yourself using the parts we listed above, which just happens to have the capability of doubling the speed at which military recruits learn to recognize and neutralize threats in DARPA's combat simulations.

More seriously, you have to jump ahead to Chapter 6 to get to the part of the book that describes how and why you might want to try that sort of thing out, but that brings us to something else that we've learned in reading Garth's books. You don't have to read them from front to back - in fact, they're often better if you skip from one chapter to another in no particular order, since they often stand on their own.

That reading approach really works well with Beyond IQ because Garth often presents brain-stretching exercises after a short discussion of the main concept in each chapter, where we suggest skipping over the exercises to read the snippets of insights presented at the end of each chapter, then coming back to the exercises when you really want to take a deep dive into a particular concept.

In putting the book together, Garth interviewed over 35 scientists doing real world research into the potential for getting more and better performance out of the human brain and the book also works well as a general introduction into the current state of the art in intelligence research. And in fact, a number of the exercises presented in the book are taken directly from their professional journal papers.

Highly recommended. You'll get smarter if you read it!

Our Reviews of Other Books by Garth Sundem