Earlier this year, economic historian Robert Higgs of the Independent Institute presented a paper challenging the worth of Gross Domestic Product (GDP) as a measure of the economic welfare of a nation's people. In the following excerpt, he gets straight to the heart of the matter in discussing the issues considered by the originators of GDP, such as Simon Kuznets, as they developed it into the statistic we know today.

Among the many issues involved in these developments, none loomed larger than that of the meaning and purpose of national income and product. Analysts eventually settled, for example, on the definition of GDP as the total value at market prices of all final goods and services produced within a nation’s boundaries, usually in a year, although quarterly estimates eventually became routine as well. Once such a number has been produced, however, what does it mean? In particular, is it in some sense a measure of economic welfare? Kuznets, despite many practical compromises in details, had generally sought a measure that in some definite sense could be called a measure of welfare. The parallel developments associated with Richard Stone and others in the United Kingdom, in contrast, forthrightly rejected this interpretation, yet, having done so, they still had to face the question about any given estimate of GDP: What does it mean? Is it simply a hodgepodge of numbers reduced to a single number that in some rough, vague way can be employed to compare one year’s economic performance with another year’s or to compare one country’s performance with another’s? When Kuznets’s approach lost out to the Commerce Department’s, this question was not so much settled as brushed under the rug. Rather than attempt to wrestle with the issue until reaching a definite resolution, economists seemingly tired of debating it and decided simply to forge ahead without worrying much about the meaning of the estimates with which they were working. After all, as they viewed the matter, pressing questions of macroeconomic policy demanded answers, and any particular way of computing GDP would yield a result that can be treated as if it were the economy’s aggregate output—whatever that might mean—for purposes of economic policy making and planning.

Higgs concludes his paper by recognizing that while GDP, as it became, doesn't work very well at all as a measure of the economic welfare of a nation's people. He argues that:

If GDP is to make any sense at all, it must do so in relation to some concept of economic welfare. Economics is not a science of the production of hammers and nails but of wealth—the goods and services that people actually value, as they demonstrate by voluntarily forgoing alternative goods and services in the process of acquiring those they choose to acquire. It is unfortunate that once we recognize this reality, we are left to conclude only that, notwithstanding the disclaimers of nearly all current economists and other analysts who use the NIPA concepts and estimates, GDP is indeed a measure of economic welfare. It is simply an exceedingly poor such measure.

So what would be a better measure? What statistic would provide a much better indication of the economic welfare of a nation's people?

What Would Work Better

Back in March 2015, we more or less stumbled into an answer for the question as we were researching the earliest history of the development of GDP a generation before Kuznets and others began constructing the measure that we know today. We wrote at the time:

In researching the topic, we dug deep into the history of how Gross Domestic Product became the defining measure of a nation's economic performance. Here, the godfathers of GDP were Alfred Marshall and A.C. Pigou, who originally developed the concept of a "National Dividend" or interchangeably, a "National Income" early in the 20th century. Their work was built upon by Simon Kuznets, who actually developed the prototype accounting calculations for GDP as we know it today.

But almost lost in that early history was a very different concept developed by Irving Fisher, who instead of focusing on production as Marshall, Pigou and Kuznets did, defined his concept of the National Dividend around what people consumed. And while Fisher's concept put the focus on the end consumers in a nations, people living in households, where their consumption of goods and services would provide a measure of their quality of life, it was never fully developed because of the challenges that lay in quantifying it....

We see that historically, the main obstacle to making practical use of Fisher's consumption-based definition of the national dividend results from the lack of adequate data to describe the consumption of millions of consumers in the country. But that hasn't been true since 1984, when the U.S. Bureau of Labor Statistics and the U.S. Census Bureau teamed up to conduct the Consumer Expenditure Survey. We actually now have three decades worth of solid data to estimate the money value of total consumption in the hands of millions of consumers in the country. That's something that wasn't possible in the early 20th century when these concepts of National Dividends or National Income were being fleshed out.

We then did what nobody before us had done. We brought Irving Fisher's proposed concept of the national dividend, which would inherently represent a measure of the economic welfare of the nation's people, into reality.

Here are our updated results for the United States as a whole, spanning the years from 1984 through 2014 - the most recent full year for which we have data, in which we've also broken out the aggregate amount of consumption that was funded by debt. Our first chart presents the national dividend in terms of nominal current year U.S. dollars. 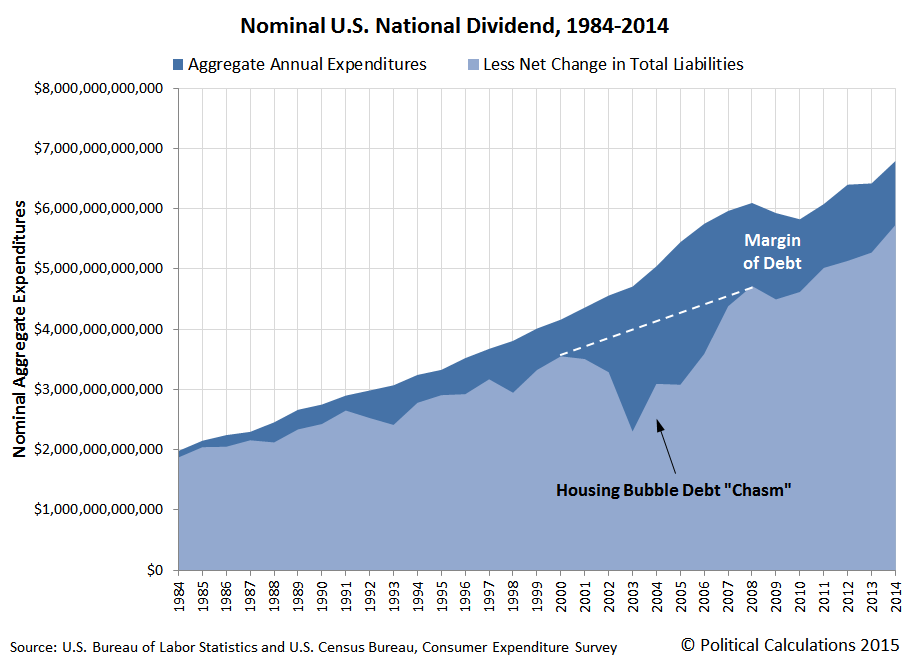 Our next chart presents the same data, adjusted for inflation, as given by the Consumer Price Index for All Urban Consumers, to be in terms of constant 2014 U.S. dollars. 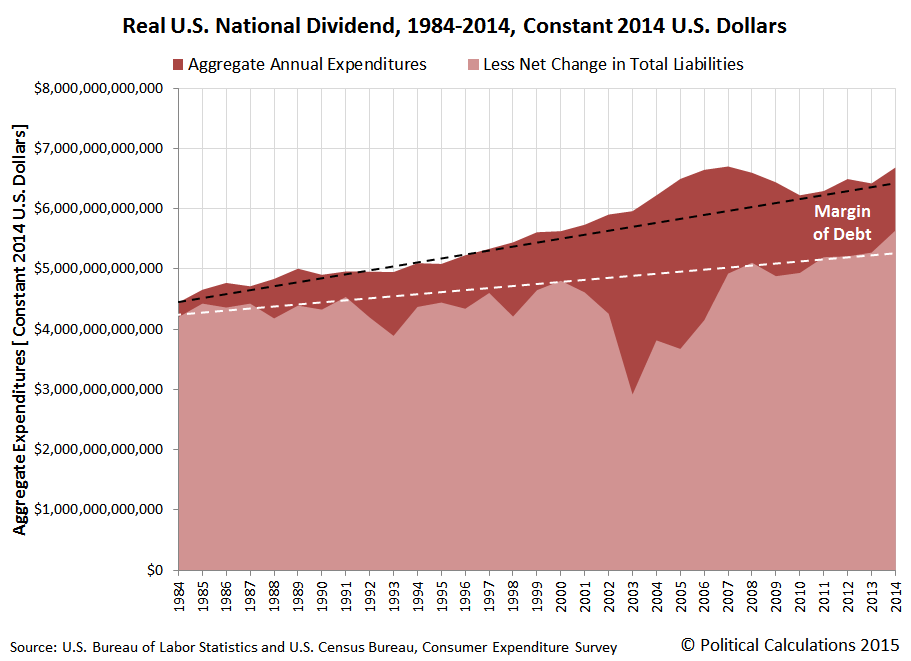 Our third chart reveals how our calculation of the national dividend compares to GDP, which reveals both how well GDP reflects the economic welfare of Americans and the extent to which GDP has become a less effective measure of their economic welfare over time. 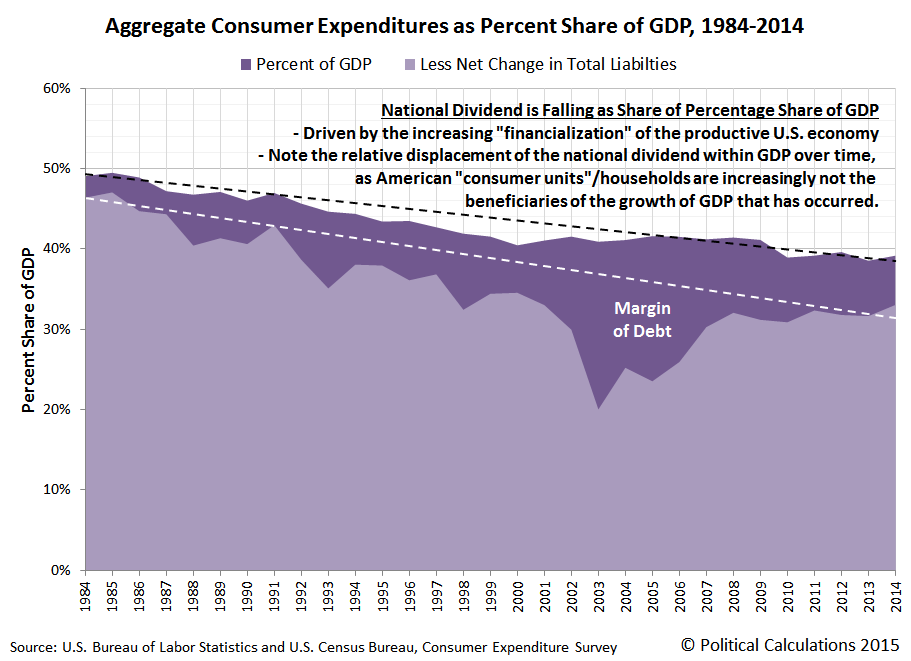 The preceding charts apply to the United States as an aggregate whole, but if our national dividend calculation is to have value as a measure of the economic well-being of regular Americans, we need to

The National Dividend for the "Typical" American Household

We have the annual average expenditure data to represent what the aggregate national dividend means to the typical U.S. household, or rather, as the data jocks of the U.S. Census Bureau and the U.S. Bureau of Labor Statistics affectionately refer to them in the Consumer Expenditure Survey which collects and presents the data we used to calculate the National Dividend, "consumer units". Our next chart shows the nominal U.S. national dividend per consumer unit for the years 1984 through 2014: 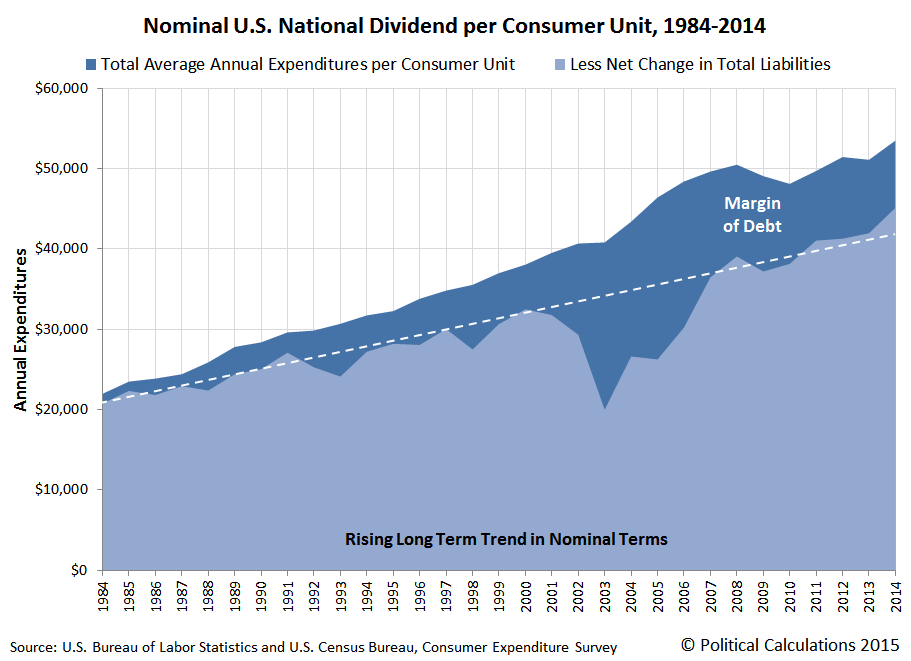 Here is the same information, but now adjusted for the effect of inflation to be in terms of constant 2014 U.S. dollars, in which we discover that there has been little to no material improvement in the economic welfare of the typical U.S. household from 1984 through 2014. 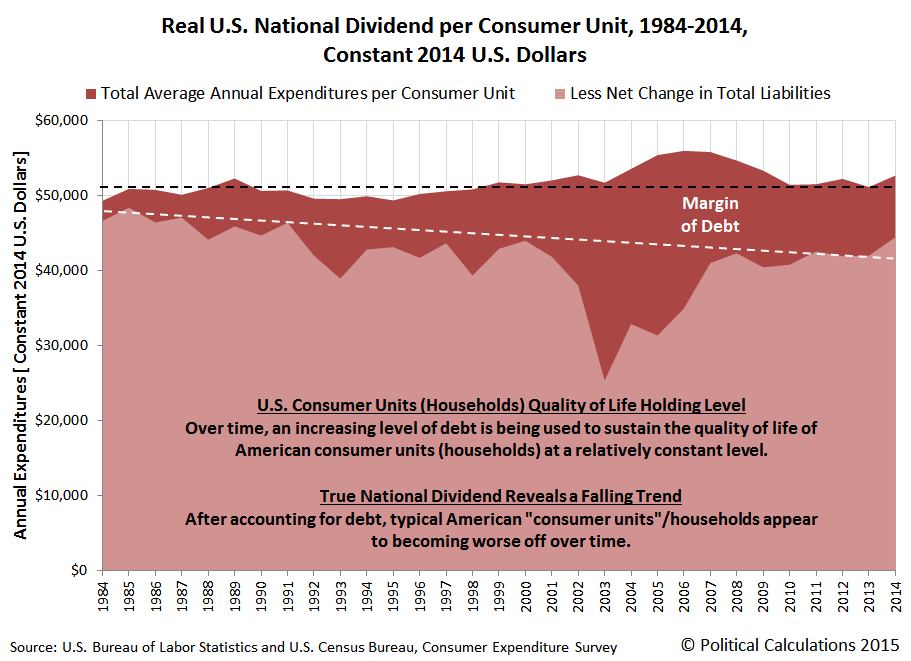 Beyond that observation, we also find that stagnant outcome has been increasingly sustained with an increasing level of household debt over time.

Replacing GDP with the National Dividend

Our calculation of the household consumption-based national dividend for the United States reveals a story that runs contrary to the narrative that the producers of GDP have been telling for the last thirty years, while at the same time confirming that GDP is a poor measure of the economic welfare of the American people.

As such, we would suggest that for those looking for an economic statistic that can provide much greater insight into the real economic welfare of the American people, our development of the consumption-based National Dividend is perhaps the most logical place to begin, now that we've made it possible to consider.