Political Calculations
Unexpectedly Intriguing!
26 May 2016
The Priorities of the U.S. Department of Homeland Security

The chart below visualizes what we found in the DHS' own Budget in Brief documents for each year from the U.S. government's 2007 fiscal year (beginning on 1 October 2007) through the projected end of the current 2016 fiscal year (ending 30 September 2016). We've ranked the spending by major organization within the DHS from lowest to highest as of FY2016. The values in the chart are given in thousands of U.S. dollars. 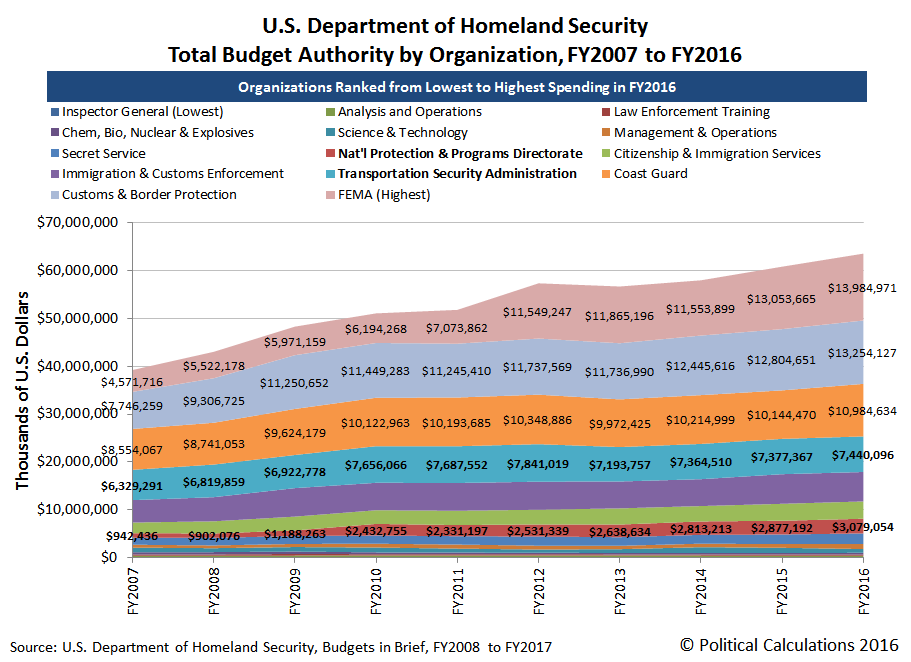 Since Fiscal Year 2007, the annual budgets of two organizations within the U.S. Department of Homeland Security have more than tripled: the Federal Emergency Management Agency (FEMA) and the National Protection and Programs Directorate (also called the Office of Infrastructure Protection).


Meanwhile, the remaining seven major organizations have budgets in FY2016 that are all within 31% of what they were in FY2007 - some higher and some lower: Immigration and Customs Enforcement (131%), Coast Guard (128%), Transportation Security Administration (118%), Federal Law Enforcement Training Center (97%), Analysis and Operations (88%), Science and Technology Directorate (81%) and the Chemical, Biological, Nuclear and Explosives Office (72%).

What that means is that the TSA has all the money it would take to provide a similar level of service in 2016 as it did in 2007, if only it spent money the same way. Because it is spending its money differently, the problems the TSA is now having in causing significant delays for travelers at U.S. airports may be entirely attributed to the decisions of the DHS and its own management for how its available funds have actually been spent.

That's why the TSA's security chief, Kelley Hoggan, has been put on administrative leave, pending a new assignment (no, he hasn't has his federal government employment terminated as erroneously reported by several mainstream news outlets - that would take a system of real accountability for managerial job performance that the civilian branches of the U.S. federal government haven't had since 2008 - Hoggan is still receiving his full paycheck.)

Where does the buck stop again?