GDP is an awful way to measure the well being of the regular people who live in a nation.

That's why last year, we first began developing one of the original alternative concepts for determining the economic well being of a nation's people, the national dividend, into a monthly economic indicator for the United States.

Unfortunately, that development has been hamstrung by a lack of good quality monthly estimates of the number of households in the U.S., where the ones that are available turn out to not be updated monthly, which limits our ability to calculate the national dividend on a more frequent, near-real time basis.

Still, we can use the data we do have to put together a picture of how the typical American household is faring economically on a month-to-month basis. Let's start by considering month-to-month evolution of median household income in the U.S. from January 2000 through April 2016, which we've visually presented in both nominal (actual) values and also in the inflation-adjusted terms of constant April 2016 U.S. dollars below. 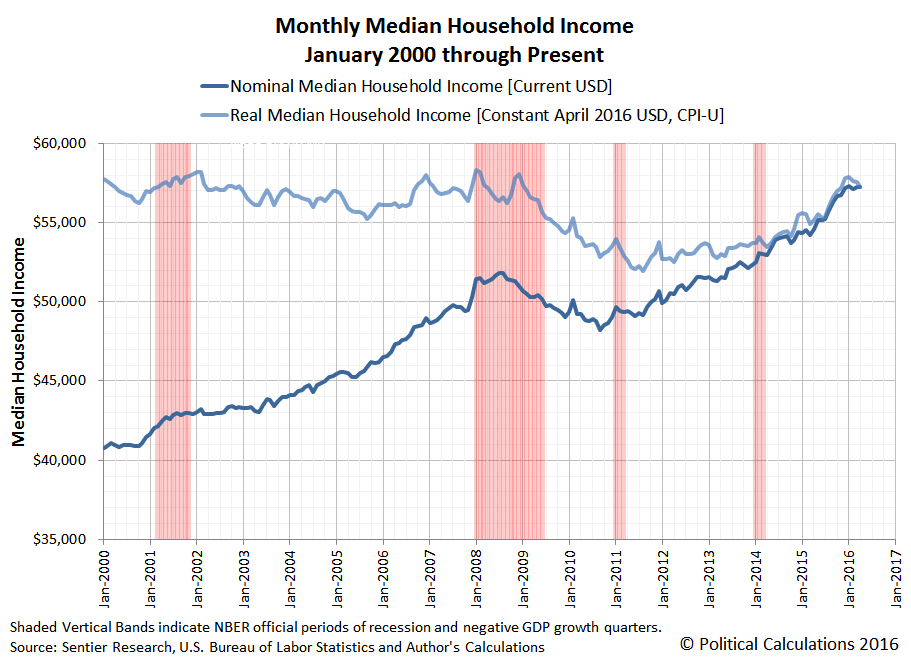 We see that after rapid growth in the second half of 2015, median household income stalled out in the first quarter of 2016, and has even been falling in real terms. Both recent trends would appear to be largely correlated with changes in oil and fuel prices (please click this link if the site where you're reading this article doesn't show the interactive chart immediately below this paragraph), where prices plunged from roughly $60 per barrel at the end of June 2015 to bottom at $26 per barrel in mid-January 2016, before recovering to their current $47-$48 per barrel level.

What the apparent correlation between changes in oil and fuel prices and the rate of growth of median household income suggests is that the sectors of the U.S. economy that are most sensitive to changes in fuel prices, such as restaurants, vehicle sales, and travel, boomed in the latter portion of 2015 as fuel prices plunged to their lowest values in years. That boosted the number of Americans earning incomes in these industries, many of whom were drawn in from existing households, which in turn, helped boost median household income.

But as these industries' revenues have become pinched as oil prices have rebounded, with regular Americans having less disposable income to buy these kinds of goods and services, the rate of growth of median household income has likewise slowed.

Meanwhile, here are the estimates we're using for the monthly number of consumer units (households) in the United States from January 2000 through April 2016. [Note: We have projected the number of households for April 2016 based on seasonal patterns we have observed in the data since 2010 - the Census Bureau's available monthly estimates for the number of households in the U.S. only extends through March 2016 at this writing.] 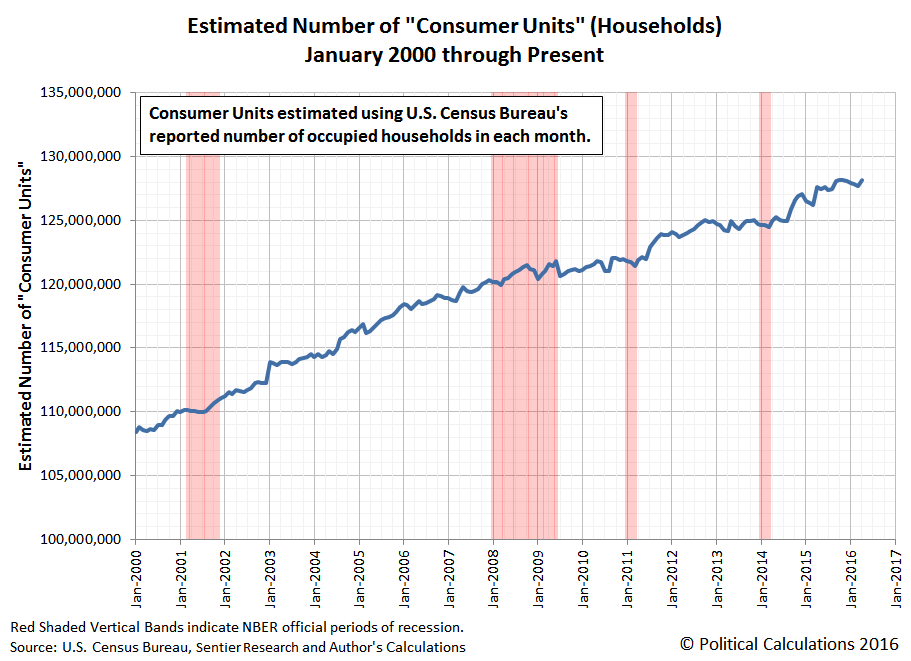 In this chart, we see that the estimated number of consumer units (households) in the U.S. has mostly held steady since August 2015, which suggests that the economy slowed down enough in the latter half of 2015 to slow the net rate of growth of new household formation.

In our final chart, we'll reveal the national dividend, which we calculate as the product of median household income and our estimated number of consumer units, which we'll present both in nominal and inflation-adjusted terms. Because median household income is approximately equal to the annual spending done by an average household in the U.S., what this math does is give us an alternative measure of their collective well-being as determined by their ability to successfully buy the things they need or want. This makes it very different from GDP, whose value is boosted by things that don't materially contribute to the well-being of regular Americans.

In the chart above, we see that after rising steadily in 2015, the national dividend has stalled out in early 2016. In nominal terms, the U.S. national dividend totals some $7.33 trillion as of April 2016. While that figure is less than 40% of the U.S.' GDP, it is important to remember that this is the portion of all the economic activity in the U.S. that actually makes it to the point where it benefits regular American households.

Situations like the developing one we've just described, where it seems the economy that matters to regular people has been stalling in recent months, demonstrate why the need for more timely estimates of the number of U.S. households (or consumer units) is essential, because this is exactly the kind of scenario where it would be really useful to be able to tell as early as possible what direction the economy is headed. Hopefully, the data jocks at the Census Bureau are working to make that a reality, although we do appreciate that the ever-changing and volatile rate of household formation coupled with differences in how this kind of data is collected and reported makes that a really tough thing to measure outside of a large scale survey of the population.

U.S. Census Bureau. Housing Vacancies and Homeownership (CPS/HVS). Historical Tables. Table 13. Monthly Household Estimates: 1955 to Present. [Excel Spreadsheet]. Accessed 26 May 2016. [We correlated this data with the annual number of consumer units collected by the Census Bureau and reported by the Bureau of Labor Statistics in the Consumer Expenditure Survey.]