As expected, the U.S. Federal Reserve acted to hike short term interest rates in the U.S. by a quarter percent, increasing its Federal Funds Rate to a new target range of 2.00% to 2.25%.

As it did, the risk that the U.S. economy will enter into a national recession at some time in the next twelve months stood at 1.6%, which is up by nearly half a percent since we last took a snapshot of this probability back in early August 2018. At present, that 1.6% probability works out to be about a 1-in-63 chance that a recession will eventually be found by the National Bureau of Economic Research to have begun at some point between 26 September 2018 and 26 September 2019.

That increase to a still very-low level is mainly attributable to the Fed's recent series of quarter point rate hikes, where its most recent was announced on 26 September 2018. Since last August, the U.S. Treasury yield curve has also slightly narrowed, as measured by the spread between the yields of the 10-Year and 3-Month constant maturity treasuries, which has also contributed to the increase in recession risk. 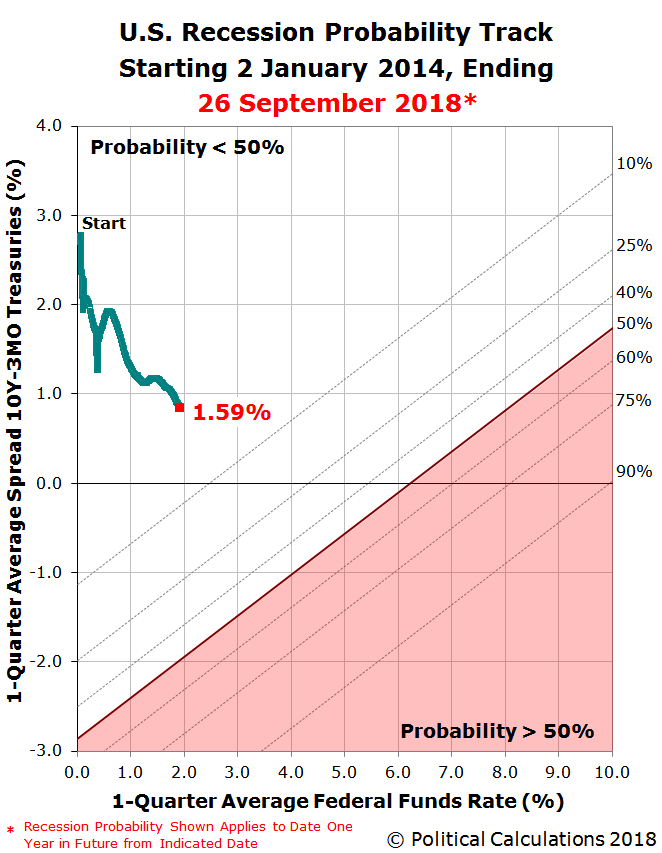 We continue to anticipate that the probability of recession will continue to rise through the end of 2018, since the Fed is expected to hike the Federal Funds Rate again in December 2018. As of the close of trading on Wednesday, 26 September 2018, the CME Group's Fedwatch Tool was indicating an 86% probability that the Fed will hike rates by a quarter percent to a target range of 2.25% to 2.50% at the end of the Fed's meeting on 19 December 2018. Looking forward to the Fed's 20 March 2019 meeting, the Fedwatch Tool is currently indicating a 53% probability that the Fed will not hike interest rates again before the end of the first quarter of 2019.

Conversely, there is a 47% chance it will hike interest rates by a quarter point at that time. With that kind of split in expectations, investors will have good reason to continue focusing on the Fed and its potential intentions for changing interest rates in 2019-Q1.

If you want to predict where the recession probability track is likely to head next, please take advantage of our recession odds reckoning tool, which like our Recession Probability Track chart, is also based on Jonathan Wright's 2006 paper describing a recession forecasting method using the level of the effective Federal Funds Rate and the spread between the yields of the 10-Year and 3-Month Constant Maturity U.S. Treasuries.