Not long ago, econophysicist Didier Sornette and several of his colleagues made a startling prediction based upon a model they've developed which they suggest is capable of identifying both the existence of an economic bubble as well as the likely timing for when it will burst (HT: Felix Salmon, Josh, Tyler Durden, Technology Review):

"By the very nature of the model, this result gives us two conclusions. Firstly, there exists a bubble in the Shanghai Stock Exchange (SSE) Composite Index. Secondly, it will reach a critical level around July 17-27, 2009. This will lead to a change in regime which may be a crash or a more gently bubble deflation."

Those dates now having come and gone, we can confirm that the Shanghai Composite Index did not crash. In fact, the level of the index generally rose through the month of July, which we confirm in our chart comparing the performance of the SSE with that of the S&P 500 in the time following the bottoming of the S&P on 9 March 2009. 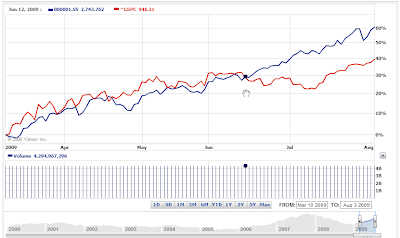 This comparison between the two indices however is more telling than you might think on first glance. We observe that from 10 March 2009 through 12 June 2009, the two stock indices tracked each other closely. They diverge after that point, first for reasons we anticipated that affected just the U.S. market, which then continued to deviate, first for reasons we are not able to identify, then for a reason we could identify in the first half of July 2009. The S&P 500 resumed growing in value after this last event, with the growth of the two indices since paralleling each other. We'll come back to the significance of these observations later....

Going back to Sornette's prediction however, in a deeper review of the three papers in which it has been presented (1, 2, and 3), we find that the dates of 17-27 July 2009 were the most likely for which a crash of a bubble in the SSE would occur, with the full likely range anticipated by the authors' method running from 10 July 2009 through 10 August 2010. So, at this writing, the clock hasn't fully run out on the timing of the predicted crash.

But is the prediction right at all? Has an economic bubble even formed in the Shanghai stock market? After all, for a bubble to burst, it must first exist, and just as there appeared to be a Chinese stock bubble in late 2007, there are suggestions that similar speculative forces are at work in Shanghai today.

According to our operational definition of an economic bubble, an economic bubble may be said to exist whenever the price of an asset or assets that may be freely exchanged in a well-established market first soars then plummets over a sustained period of time at rates that are decoupled from the rate of growth of the income that might be realized from owning or holding the asset(s).

Aside: Though the Shanghai Stock Exchange has only existed in its present form since 1992 and though its rules governing the listing of companies upon the exchange are not transparent, we will assume that the exchange satisfies the "well established" requirement and that stocks are freely exchanged upon it, which isn't hard to assume given that it has become the second largest stock exchange in the world. We'll also note that Sornette's popular writing as it applies to emergent markets supports these assumptions.

To get around that problems, we're going to have to find a proxy to substitute for the SSE index - one that does pay dividends per share. Our proxy will be the Greater China Fund (GCH), which trades on the New York Stock Exchange. To confirm that it correlates well with the Shanghai Stock Exchange, we examined the last two years for both GCH and the SSE, which we've presented below in the chart to the left. The chart to the right gives the amount of GCH's dividend payments during that period.

The differences we observe between GCH and the SSE composite index would appear to be driven by very specific changes in investor expectations for future dividend payments in the Greater China Fund. First, we see that GCH's price per share dropped precipitously after 20 December 2007, as investors anticipated that dividend payments would be cut sharply in the future following a relatively large dividend payment reflecting past performance. It dropped again after 26 June 2008 as GCH acted to slash its dividend to zero. Having accounted for these major deviations, we find that GCH is a very good proxy for the SSE composite index, if slightly more volatile as might reasonably be expected.

The dividend-related changes we observe in GCH then provide confirmation that stock prices on the Shanghai Stock Exchange are being driven by this fundamental driver of stock prices. While GCH's changes in stock value are more dramatic, the changes in GCH's dividend payout are likely the cumulative effect of consistently lowered dividend payments by companies listed on the Shanghai exchange. Since changes in expected the future dividend payments of the SSE composite index are coupled with changes in the value of the index, we therefore find that an economic bubble does not exist in the SSE, as our requirement for these two factors to be decoupled from one another is not satisfied.

So what then is behind the rise in stock prices on the Shanghai exchange that we observe beginning in November 2008?

That sounds like a paradox, until you consider how the rate of the decline in the future dividend per share payments is changing. The rate of that decline is decelerating, which in turn indicates to investors that things are in the process of turning around. 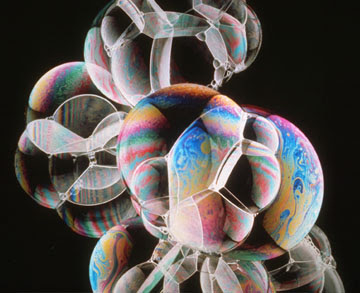 Recalling our high school physics and the experiments from those days that involved dropping things, the only way that can happen is if there's a force acting in the opposite direction. In this case, the decelerating rate of change in the growth of dividends per share in the U.S. market is providing the positive acceleration that we've observed behind the increase in stock prices since they bottomed.

Our expectation would then be that those same forces of deceleration are at work on the Shanghai exchange as well, which leads up to our conclusion that there is no bubble on the Shanghai stock exchange to burst.

That's not to say that stock prices might not crash on the exchange. Instead, if they do, it will be because of fundamental changes in the outlook for the companies on the exchange, which would be driven by factors that would change the amount of dividends they pay to their shareholders in the future. Not a fun situation, but still, not the result of having a bubble form, then pop. If there is a bubble in China today, it's not yet in its stock markets.

Aside: Didier Sornette's paper Dragon-Kings, Black Swans and the Prediction of Crises provides an excellent overview of the applications where complexity theory provides useful insights. While we dispute Sornette's conclusions on the probability of a meltdown occurring on the Shanghai Stock Exchange between 10 July 2009 and 10 August 2009, it's because we find that the math behind the prediction does not recognize the circumstances driving the market at this time, and is therefore inappropriately applied.