Just in case anyone still wonders what really drives stock prices in the long term, our chart showing the S&P 500's average monthly index value against the index' trailing year dividends per share should help remove any doubts. 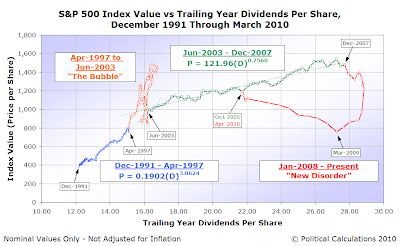 What we see is that as of the data we have through 16 April 2010, stock prices have nearly closed the loop they've made with respect to the market's trailing year dividends per share.

What's more, since we are now observing the bottoming of the stock market's trailing year dividends per share, the conditions under which orderly growth can occur in the stock market will soon emerge. Those conditions require that the market's trailing year dividends per share grow in value over time as a basic requirement to allow orderly growth to occur.

At present, the data indicates the earliest that might occur approximately around June 2010.

Unfortunately, we don't yet know how long such a period might exist, since the dividend futures data that we use to create our forecasts only extends through the fourth quarter of 2010, at least as of this writing.

What we find more remarkable in the chart however is that whatever new period of order might soon emerge will do so from a level that would fall along the average projection curve defining the previous period of order in the market.

We saw this phenomenon before with the Dot-Com Bubble, where orderly growth resumed in the market after the disruptive event of the bubble concluded almost precisely at the average price level where it would have been placed by the market's trailing year dividends per share as defined by the market's previous period of order. Here, during the period from April 1997 through June 2003, the market first soared above that projected trajectory, then plummeted below it, before finally climbing back to it and embarking on a new stable trajectory. That period of order then held until December 2007. 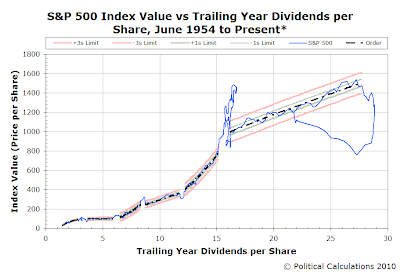 The two observations, along with many others shown in the chart to the left, strongly suggest that the level of stock prices in the long run is nowhere near as random as might commonly be believed.

We find instead that stock prices in the long run are primarily a direct function of the value of their underlying dividends per share. In the short run, stock prices are primarily driven by changes in the expected rate of growth of the market's dividends per share. We find that noise, driven by common, randomly-timed events in the market, accounts for much of the deviation we see in both the short and long runs for the market.

Provided, of course, that no new disruptive events occur that throw the market for another loop!