The U.S. Federal Reserve boldly took no action to increase short term interest rates in the U.S. at the conclusion of its 7-8 November 2018 meeting, leaving them at their current target rate of 2.00% to 2.25%, the level to which they had set them back in September 2018.

The risk that the U.S. economy will enter into a national recession at some time in the next twelve months now stands at 1.9%, which is up by roughly three-tenths of a percentage point since our last snapshot of the U.S. recession probability from late-September 2018. The current 1.9% probability works out to be about a 1-in-54 chance that a recession will eventually be found by the National Bureau of Economic Research to have begun at some point between 8 November 2018 and 8 November 2019.

That small increase from our last snapshot is mostly attributable to the Fed's most recent quarter point rate hikes on 26 September 2018. Since then, the U.S. Treasury yield curve has very slightly flattened, as measured by the spread between the yields of the 10-Year and 3-Month constant maturity treasuries, which has only contributed a very small portion of the increase in recession risk in the last six weeks. 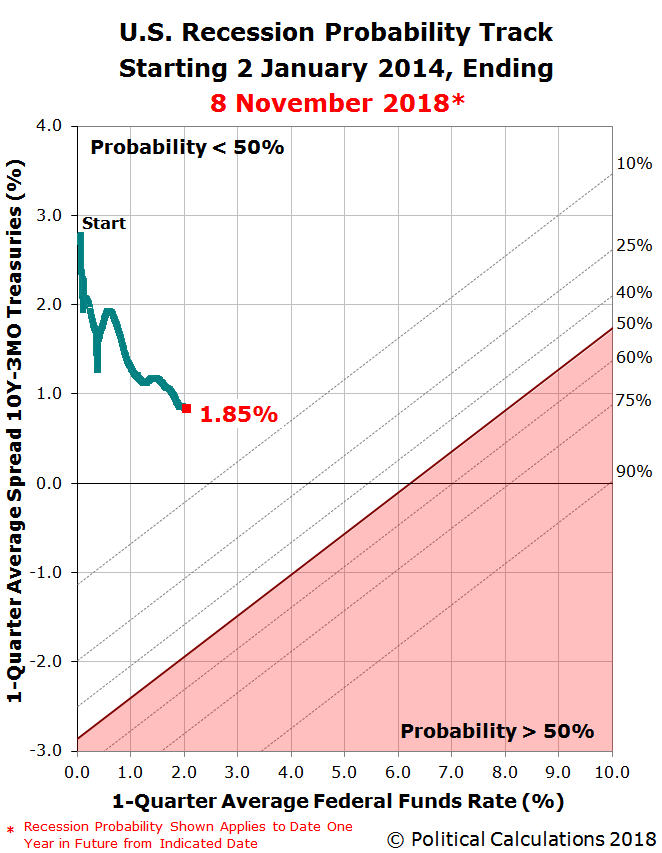 We continue to anticipate that the probability of recession will continue to rise through the end of 2018, since the Fed is expected to hike the Federal Funds Rate again in December 2018. As of the close of trading on Friday, 9 November 2018, the CME Group's Fedwatch Tool was indicating a 76% probability that the Fed will hike rates by a quarter percent to a target range of 2.25% to 2.50% at the end of the Fed's next meeting on 19 December 2018. Looking forward to the Fed's 20 March 2019 meeting, the Fedwatch Tool indicates a 53% probability that the Fed will hike U.S. interest rates by another quarter point at that time. Looking even further forward in time, the Fed is expected to hold rates steady for a while, then hike them by an additional quarter point in September 2019.

If you want to predict where the recession probability track is likely to head next, please take advantage of our recession odds reckoning tool, which like our Recession Probability Track chart, is also based on Jonathan Wright's 2006 paper describing a recession forecasting method using the level of the effective Federal Funds Rate and the spread between the yields of the 10-Year and 3-Month Constant Maturity U.S. Treasuries.

It's really easy. Plug in the most recent data available, or the data that would apply for a future scenario that you would like to consider, and compare the result you get in our tool with what we've shown in the most recent chart we've presented. The links below present each of the posts in the current series since we restarted it in June 2017 and, barring significant events, our next update will be in December 2018.