Political Calculations
Unexpectedly Intriguing!
May 13, 2020
A Shifting Geography for Coronavirus Cases in the U.S.

If you look at the trends for the progression of the COVID-19 infection in the U.S. as a whole, there's good news to be found. When you look at individual states however, the pattern becomes more mixed. There's great news out of the northeastern part of the U.S., where the high numbers of new cases and deaths are now falling, but that's less so when you go south toward Washington D.C., Maryland, and Virginia, which have become a regional hotspot for the spread of the SARS-CoV-2 coronavirus. And then there's states like Illinois that, despite being among the first in the nation to impose statewide lockdown restrictions on their residents, are seeing rising numbers.

Let's start with the good news at the national level. The following tower chart shows the overall state of the coronavirus epidemic in the United States through the end of the second month for which the COVID Tracking Project has been regularly tracking the progression of the virus' spread at the state level. Over 9.6 million Americans have been tested for the coronavirus, with nearly 8.3 million testing negative and nearly 1.4 million testing positive. 76,617 deaths have been attributed to COVID-19, with at least 28% occurring in the state of New York, where a quarter of those deaths have occurred within the state's nursing homes because of a scandalous policy enacted by state's governor. The following chart shows the number of newly confirmed coronavirus cases and deaths attributed to COVID-19 reported within the U.S. as a rolling 7-day total during the two months from 10 March 2020 through 12 May 2020. Presenting the data this way addresses a cyclical pattern that arises in the daily data because state and local government officials are not fully reporting data on weekends. 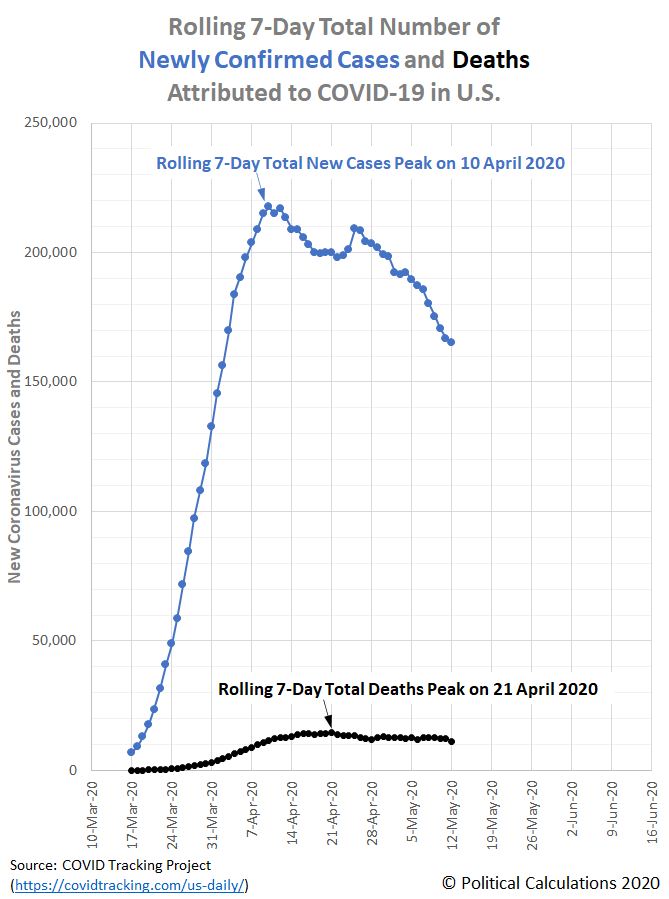 Measured this way, we see the peak of reported new cases occurred on 10 April 2020, while the number of deaths peaked on 21 April 2020.

Getting to where the big news is, the skyline tower charts illustrating the progression of COVID-19 cases for U.S. states and territories from 10 March 2020 through 12 May 2020 are below, where we can see the slowing rate of growth of confirmed cases in the individual state or territory tower charts, and for the states and territories that report the number of recovered patients, in the transition from orange to lighter green shading in their tower charts.

Each of these charts span the same period of time and the width of each corresponds to 2.0% of each state or territory's population, making it very easy to see which states and territories have been most impacted and which have been the least impacted through the first nine weeks of the coronavirus epidemic in the U.S., especially since we've ranked them from the highest percentage of infection within the state's population to the least as you read from left-to-right, top-to-bottom.

Another sign of improvement is that for the third week in a row, we haven't needed to adjust the horizontal scale of the charts to accommodate larger percentages of confirmed cases within the populations of the most affected states and territories.

In upcoming analysis, we're going to take a closer look at the adverse trends centered around the nation's new coronavirus hotspot in Washington D.C., and also the states whose growing number of cases and deaths indicate their statewide lockdowns have not been effective.

We're also covering the worst-in-the-U.S. situation in the state of New York and why it has been so bad in that state: