The Mauna Loa atmospheric CO2 concentration data continue to show no reduction in the rate of rise due to the recent global economic slowdown. This demonstrates how difficult it is to reduce global CO2 emissions without causing a major disruption to the global economy and exacerbation of poverty.

After removal of the strong seasonal cycle in Mauna Loa CO2 data, and a first order estimate of the CO2 influence of El Nino and La Nina activity (ENSO), the May 2020 update shows no indication of a reduction in the rate of rise in the last few months, when the reduction in economic activity should have shown up. 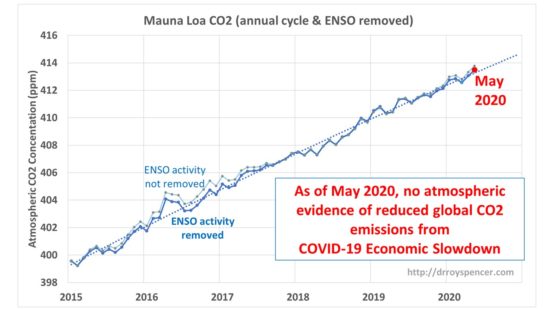 Since we've been using the same data to track the global economic impact of the coronavirus pandemic, that was surprising because we do see human fingerprints in the atmospheric CO₂ data, which we've indicated in the following chart: 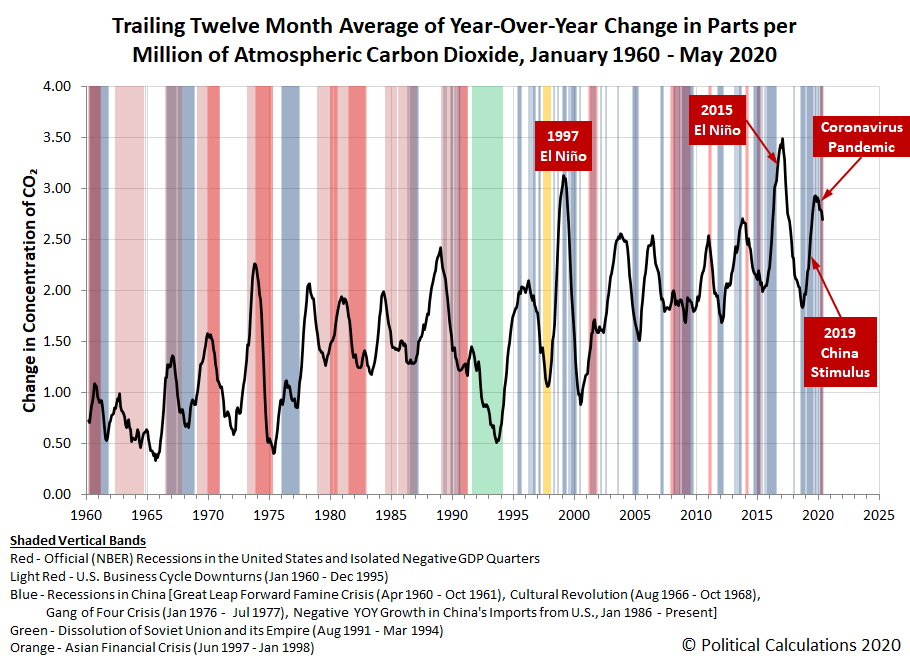 Sharp-eyed readers will immediately recognize that we're not looking at the data the same way that Dr. Spencer is looking at it. He's looking at the overall concentration of carbon dioxide in the Earth's atmosphere over time, while we're looking at the trailing year average of the year over year change of those levels, where our data would correspond to his data that does not remove the contribution of ENSO (El Niño Southern Oscillation) activity.

In fact, if anyone would like to check our results, here's the data source. Using the data in the "Interpolated" column, calculate the year over year change for each month, then calculate the trailing twelve month average to address seasonality in the data. It should be pretty easy for anyone to replicate the heavy black line in our chart.

Our chart also indicates recessions and other events with negative economic impacts via the colored vertical bands, which are described at the bottom of the chart and which you can see are often correlated with declines in the rate at which carbon dioxide accumulates in the Earth's air. There are exceptions, which we believe may be attributed to unique economic stimulus efforts in recent years, but generally, changes in the pace at which CO₂ changes in the atmosphere does correspond to changes in human activities, typically rising during periods of global economic expansion and either failing to rise or falling during periods of global or widespread regional economic recession.

In terms of the overall level of carbon dioxide and its effect on the Earth's climate however, those changes are very small, which is why Dr. Spencer is correct to observe that the coronavirus recession is having very little effect on the total level of carbon dioxide in the atmosphere or the long-term trend for the climate, especially when compared to natural variations.

Still, it's cool that we can somewhat make out human fingerprints in the atmospheric CO₂ levels, where the following links will provide some background into our coverage of the subject.