In July and August 2021, the active variants of the SARS-CoV-2 coronavirus spread through China, Japan and several nations in southeast Asia, disrupting global supply chains. How much has that disruption affected the world's economy?

We can estimate that impact by tracking the pace at which carbon dioxide is added to the Earth's atmosphere. The trailing year average of that rate has fallen sharply since June 2021, as shown in the latest update to the chart tracking its history since January 1960. 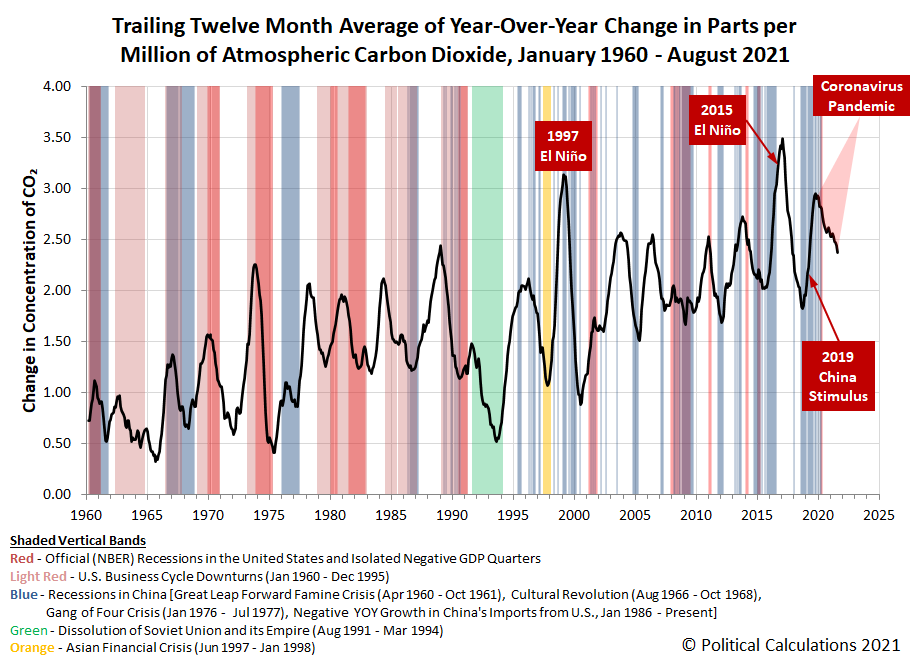 Since December 2019, a net reduction of 0.57 parts per million of atmospheric carbon dioxide has been recorded in the trailing twelve month average of the year over year rate of change in atmospheric carbon dioxide levels measured at the remote Mauna Loa Observatory. Of that, a net reduction of 0.10 parts per million occurred since June 2021. We can convert both these changes into an estimate of the lost GDP for the global economy using the following tool. If you're accessing this article on a site that republishes our RSS news feed, please click through to our site to access a working version of the tool.

Using the default value of a -0.10 parts per million to account for the change in the rate of growth of atmospheric carbon dioxide since June 2021, we find the equivalent net loss to global GDP attributable to the spread of COVID in southeast Asia and its disruptive effect on the world economy is 3.3 trillion.

Going back to the beginning of the coronavirus pandemic, the reduction of 0.57 part per million in the rate at which carbon dioxide is being added to the Earth's air corresponds to a net loss to global GDP of $18.9 trillion.

We'll conclude by recognizing that not all the decline in the pace at which CO₂ is being added to the Earth's air is related to the disruption to global supply chains from the spread of COVID in southeast Asia. The Chinese government's action to shutter energy-intensive aluminum production to meet environmental goals is also a contributing factor. Since China is the world's largest smelter of aluminum, halts to its production both reduces China's carbon dioxide emissions at the cost of shrinking its economic output.