As expected, with the U.S. economy decelerating, the U.S. Federal Reserve held interest rates steady, indicating that it would maintain its target range of 2.25%-2.50% for the Federal Funds Rate through the rest of 2019.

The risk that the U.S. economy will enter into a national recession at some time in the next twelve months has risen to 6.2%, which is up by nearly two-and-a-half percentage points since our last snapshot of the U.S. recession probability in late-January 2019. The current 6.2% probability works out to be about a 1-in-16 chance that a recession will eventually be found by the National Bureau of Economic Research to have begun at some point between 20 March 2019 and 20 March 2020, according to a model developed by Jonathan Wright of the Federal Reserve Board back in 2006.

The Fed's decision to hold the Federal Funds Rate steady through the rest of 2019 comes as indications that the established global economic slowdown has finally reached the U.S. economy, causing a portion of the Treasury yield curve to invert, with the yields of mid-term Treasuries dropping below the yields of short-term Treasuries, even as the Fed has stopped increasing the Federal Funds Rate. 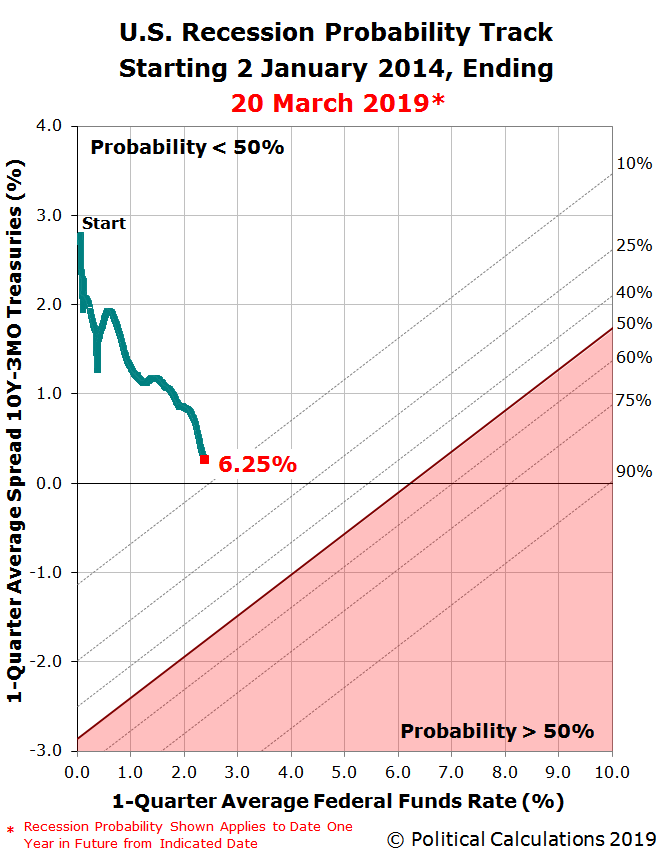 The Fed also indicated it would begin slowing its policy of reducing its holdings of U.S. government-issued debt securities in May 2019 and stop reducing its quantitative tightening policy altogether in September 2019. Many bond market investors have cited this policy's role in creating a more contractionary monetary environment than would otherwise exist if the Fed had only been increasing the level of the Federal Funds Rate, where the so-called shadow Federal Funds Rate is effectively higher than the nominal Federal Funds Rate, contributing to the slowdown in the U.S. economy.

If you would like to get in on the game of predicting the odds of recession starting in the U.S., please take advantage of our recession odds reckoning tool, which like our Recession Probability Track chart, is also based on Jonathan Wright's 2006 paper describing a recession forecasting method using the level of the effective Federal Funds Rate and the spread between the yields of the 10-Year and 3-Month Constant Maturity U.S. Treasuries.