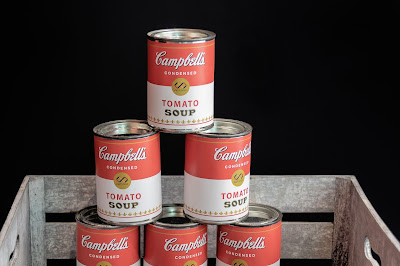 The Campbell Soup Company (NYSE: CPB) will celebrate its 150th anniversary of being in business in 2019. Founded in 1869 as the Joseph A. Campbell Preserve Company in Camden, New Jersey by fruit merchant Joseph Campbell and icebox maker Abraham Anderson, it wasn't until 1897 that the company developed and began selling the condensed soups that would come to define the company's brand in the United States and the world.

What made Campbell's soups successful was the condensing process that John T. Dorrance developed in the late 1890s, which removed water from soup without removing flavor, where home cooks could simply add water to the company's new concentrated soup product and then heat it to be served. That innovation allowed Campbell's to use much smaller cans for their soup, which also made their soup more affordable to produce and ship, not to mention for consumers to buy. Previously, the company's uncondensed soups had cost consumers 30 cents for a large can, where its new condensed soup products, which were capable of making an equivalent amount of soup, could be sold profitably for just 10 cents a can.

In 1898, Campbell's introduced the red and white labels that became the company's trademark for its line of condensed soups, which included Tomato, Consommé, Vegetable, Chicken, and Oxtail. Of these first five soups, Tomato became the company's most iconic product, where in 2010, Andy Warhol's painting of a single can of Campbell's Condensed Tomato Soup sold at auction for over $9 million.

Today, Campbell's Condensed Tomato Soup is the company's second-biggest seller, with the company's ubiquitous Chicken Noodle soup having claimed the top spot in the years since its introduction in 1934, when it was originally rolled out as "Chicken with Noodle" soup. [On a side note, it became definitively named "Chicken Noodle" when famous radio performer Freeman Gosden flubbed the company's chosen name for the product, calling it "Chicken Noodle" on air. The company quickly adopted "Chicken Noodle" as the name of its newest soup, and the rest, as they say, is history.]

Campbell's Condensed Tomato Soup is unique among American foods because of how little it has seemed to change over the 12 decades that it has been produced. Which is pretty amazing, considering that every single aspect of the product has changed over its 120 year history. Everything from the tomatoes, the way its made, the way its shipped, the cans, and even the labels have been changed incrementally over the years. But by far, the most noticeable change of all for American consumers has been its price.

The following chart show how the price of the iconic Number 1 "picnic" size can of Campbell's Condensed Tomato Soup has changed since it first started to be sold in American grocery stores in January 1898, all the way through December 2018. The chart shows the history of the prices at which we've documented that American consumers have purchased it on a linear price scale, but if you would rather see it on a logarithmic price scale, please see this version of the chart. 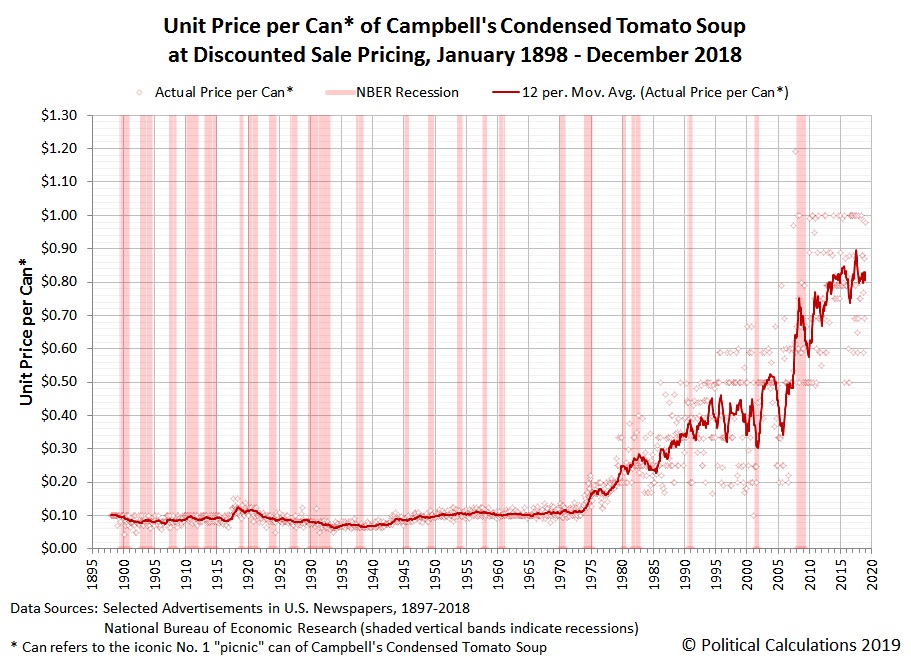 Today, the average sale price that Americans pay for a 10.75 ounce can of Campbell's Condensed Tomato Soup is about 8 times the cost of what they paid for its 1898 equivalent. If we do the inflation math over that 120 year period, it would seem the price has increased at an average annual rate of roughly 1.7%.

But that price hasn't risen steadily as you might expect. For the first 75 years of its history, the average price that Americans paid for a single can was mostly flat, costing within a few cents of the same 10 cents per can price that American consumers first paid for a can of Campbell's Condensed Tomato Soup at the end of the 19th Century. In the last 45 years however, the cost of a single can has jumped eight-fold, which works out to be an average annual rate of increase of 4.7% during these last four and a half decades.

Much Ado About Tomato Soup

What can a single consumer food product say about life in America over the last twelve decades? Quite a lot actually, where we've really only scratched the surface....