Political Calculations
Unexpectedly Intriguing!
October 13, 2020
The Coronavirus Pandemic in the U.S. at the Seven Month Mark

A familiar pattern is beginning to repeat in the seventh month of the coronavirus pandemic in the United States. That pattern involves the onset of a "delayed" first wave of coronavirus infections spreading in regions of the U.S. that had previously experienced either fairly low or relatively contained levels of infections.

The first time we saw the arrival of a delayed first wave of COVID-19 infections, it occurred among high population states in the sunbelt region of the United States. In September and October 2020 however, we're seeing that same dynamic taking place in the northern plains, in the upper midwest, and in the mountain states regions of the U.S. The following heat map from NPR capably highlights the states and territories seeing the highest incidence of daily new cases as of 12 October 2020 in red. Meanwhile, others that have previously been "in the red" for coronavirus infections have faded to either orange or yellow. 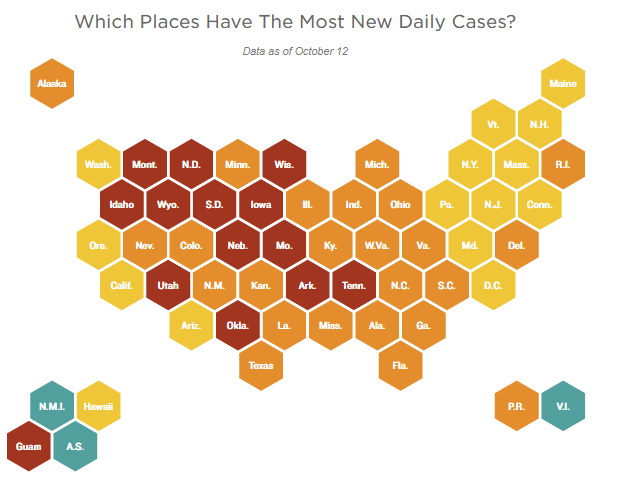 At the same time, we're also seeing increased numbers of new cases in the northeastern U.S., which was the first region to be hit with coronavirus infections. These levels are still low, but bear watching in that it confirms that the "herd immunity" effect may not be as well developed in these areas as residents of these communities may have believed. There have also been confirmed reports of Americans who have become reinfected with the SARS-CoV-2 coronavirus after previously recovering from it, which suggests the duration of immunity following an initial infection can be limited.

Here is the latest update to our three-in-one "trifecta" chart showing the major trends in the daily progression of COVID-19 infections in the United States from 10 March 2020 through 15 September 2020. The three charts show:

The third chart in this set shows the "third wave" in the national numbers. Please click here to see the full-size version of this chart.

When we drill down to the state level data available from the Coronavirus Tracking Project's database, the patterns we've described above become more apparent.

The latest update to the skyline tower chart showing the progression of coronavirus cases, hospitalizations, and deaths in the fifty states and six territories of the United States. It confirms the improving situation for coronavirus cases across much of the nation and also the arrival of a delayed first wave hitting states like North Dakota, which now ranks second in the country.

States whose COVID progression towers have bases that resemble a trumpet flare are those that are experiencing the latest delayed first wave effect. These states include North Dakota, which now ranks second in the U.S. for the percentage of population testing positive, and others like Montana, North Dakota, South Dakota, Wisconsin, and Wyoming.

Meanwhile, many of the sunbelt states that experienced high rates of spreading COVID-19 infections during the summer are now seeing the coronavirus spread at much slower rates. You can see that improvement in the 'straightening' sides of the orange-shaded portion of the towers indicating the share of each state or territory's population that has returned a positive result in coronavirus testing to detect active infections. You can also see the improvement in increasing amount of 'green' shown in many of these charts, which reflects estimates the of number of recovered coronavirus cases or that more conservatively report the number of coronavirus patient discharges from hospitals (some states don't report this data).

Several states and territories continue to have towers that look like needles when presented on the same horizontal and vertical scales with respect to their populations, having experienced little spread of the infection. That result may not be as positive as it sounds, because it suggests they may be more at risk of future outbreaks because their residents will not have had the exposure that would lead to the level of herd immunity that states with much larger outbreaks have developed, though that comes with the caveats we described above.

Overall, Louisiana continues to hold the top ranking for percent of population with confirmed active infections during the first seven months of the coronavirus pandemic in the U.S. It is also the only state to have experienced a legitimate second wave, although as we've previously discussed, its "second wave" is really more of a delayed first wave affecting parishes within the state that had seen relatively few cases when the parishes of the New Orleans metropolitan area experienced the state's "first wave" of cases in March 2020.

This section proved to be popular among readers when we introduced it last month, so we're revisiting it this month, comparing the relative timing and magnitude of New York's number of coronavirus cases and deaths with those of just two states this time: Florida and Wisconsin.

These three states are hundreds of miles from each other and each has experienced just one massive wave of coronavirus infections with their peak per 100,000 residents being similar in magnitude to one another, but roughly three months apart: New York in April 2020, Florida in July 2020, and Wisconsin in October 2020. In the two sets of charts below, we've compared the daily progression of COVID-19 cases (upper) and deaths (lower) in New York and Florida (blue and green) and also New York and Wisconsin (blue and orange). 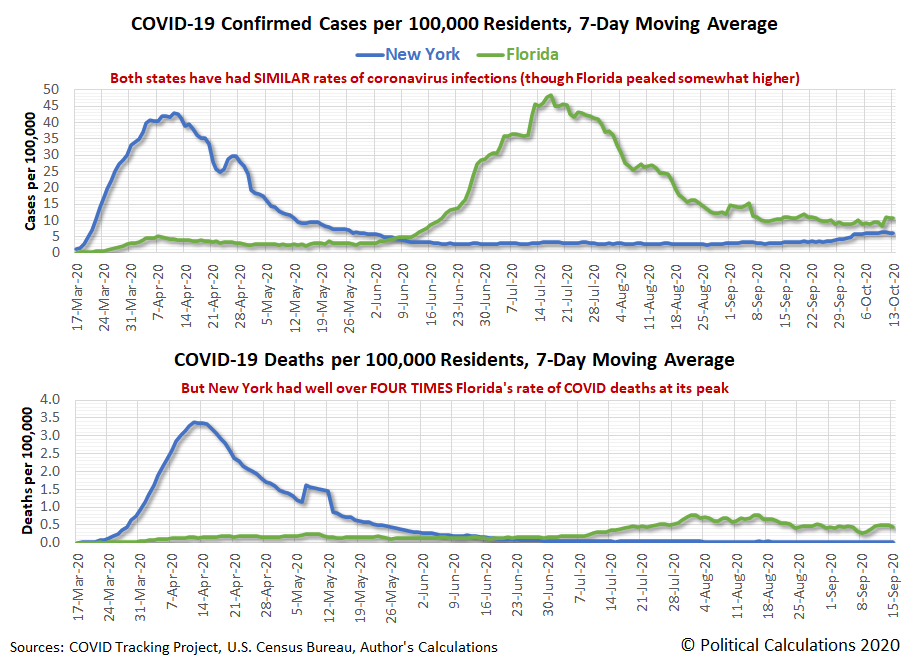 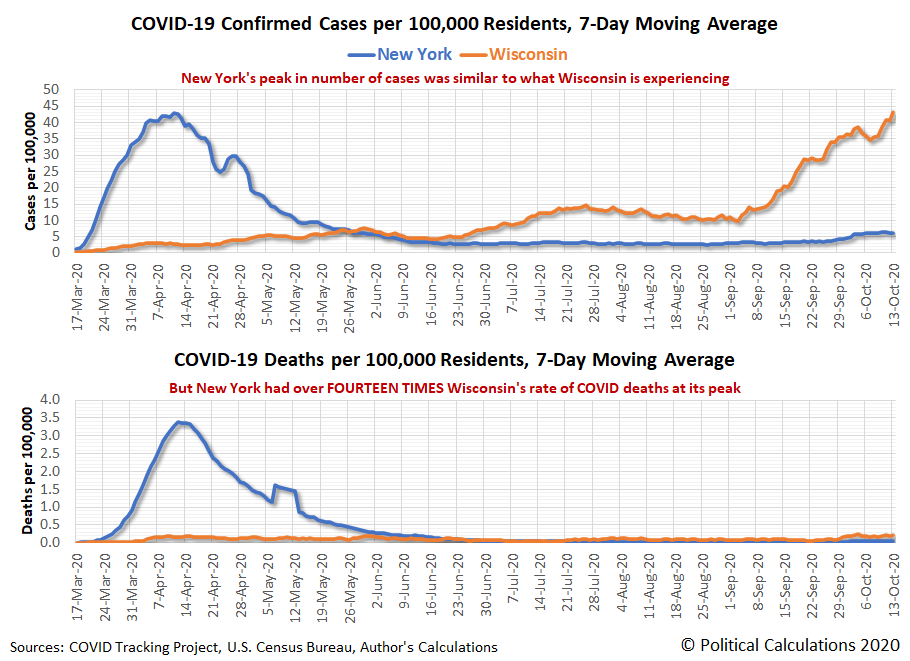 Despite what some claim, there are not three separate waves of coronavirus infections striking the U.S. Using the example of just these three states, we find that different, geographically-separated states have been struck by a similarly sized wave of COVID-19 infections at different times as the coronavirus has propagated among the population in different regions at different times. That process has occurred regardless of whatever lockdown policies each state has had or maintained.

While all three states have experienced similar rates of coronavirus cases, both Florida and Wisconsin have each underrun New York's COVID-19 death tally by a significant margin. Unlike New York, neither of these states adopted a policy of forcing nursing homes to admit coronavirus patients without testing to determine if they were still infectious. Consequently, these states have outperformed New York in avoiding coronavirus deaths, reducing the rate of exposure of the SARS-CoV-2 coronavirus among the most vulnerable portion of their populations: the sick and elderly.

Governor Cuomo wasn't alone in putting that kind of deadly policy in place. Together, the four states that sustained similar policies account for the bulk of excess COVID-19 deaths in the United States.

Here are previous posts in this series, presented in reverse chronological order: