China has been coping with shortages of both coal and oil since August 2021, with now widespread power outages disrupting its economic output from September 2021 into October 2021. Since the country is the world's largest emitter of carbon dioxide by a very wide margin, the impact of its forced blackouts are already showing up in the measurements of atmospheric carbon dioxide concentration at the remote Mauna Loa Observatory in the Pacific Ocean.

The following chart shows that change as the steepening decline in the pace at which carbon dioxide is being added to the Earth's atmosphere since July 2021. 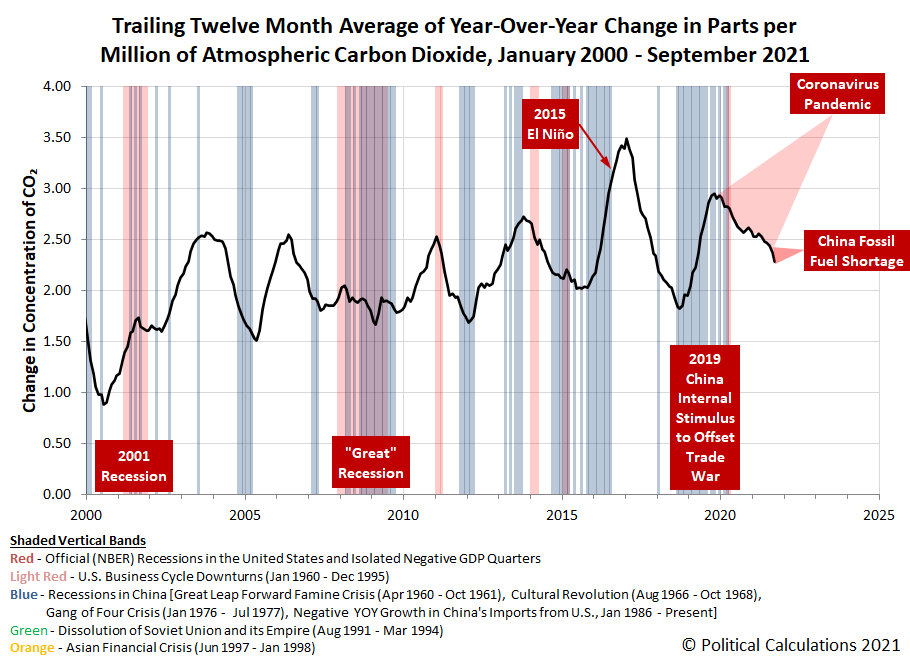 Since December 2019, a net reduction of 0.65 parts per million of atmospheric carbon dioxide has been recorded in the trailing twelve month average of the year over year rate of change in atmospheric carbon dioxide levels measured at the remote Mauna Loa Observatory. Since June 2021, a net reduction of 0.18 parts per million have been recorded. We can convert both these changes into an estimate of the lost GDP for the global economy using the following tool. If you're accessing this article on a site that republishes our RSS news feed, please click through to our site to access a working version of the tool.

Using the default value of a -0.18 parts per million to account for the change in the rate of growth of atmospheric carbon dioxide since June 2021, we find the equivalent net loss to global GDP attributable to the spread of COVID in southeast Asia and to China's fossil fuel shortage is $6.0 trillion. Going back to the beginning of the coronavirus pandemic, the reduction of 0.65 part per million in the rate at which carbon dioxide is being added to the Earth's air corresponds to a net loss to global GDP of $21.6 trillion.

Looking forward, the coal shortage has begun to affect India's economy, with reports of power outages in the country's northern states.