We're about to go out on a huge limb, so let's lead off with it: Order has re-emerged in the stock market following the disruptive event of January 2008. We recognize that order has emerged since the stock market is now trading within a range of variation that might be described by a normal distribution.

We base this claim on just five points of data in time. Specifically the five points of data defined by the average daily closing values of the S&P 500 index for each month from January through May of 2008 and the index' approximate trailing year dividends per share for each of these months.

But before we show you why we think that this is the case, let's discuss some basic quantum mechanics and atomic physics....

More specifically, we're going to take you back in time to the turn of the last century, when physicist Niels Bohr first came up with a working model of the hydrogen atom. Here, the most advanced theories of physics at the time couldn't explain why hydrogen gas, when heated up until it glowed, would only emit light at certain wavelengths of the visible light spectrum when the light was passed through a prism.

We originally featured the following chart in our third anniversary post The Sun, in the Center, which shows the relationship between stock prices and trailing year dividends per share from January 1871 through November 2007: 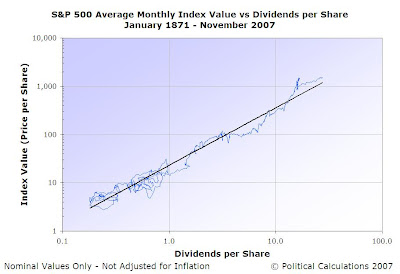 The trendline shown in the chart represents the very long term regression analysis of each month's average daily closing price versus each month's approximate trailing year dividends per share. Because it's easier to see given the scale of this chart, we'll focus our discussion on the portion of the chart corresponding to dividends per share greater than $1.00, which largely coincides with the modern era of the stock market (post-World War 2), although the same phenomena that we'll point out are also evident in the pre-WWII period (that rat's nest looking mess below $1.00!)

Where quantum effects would seem to come into play is that when these periods of stability end, stock prices enter into a relatively brief period of disorder or a disruptive event, in which the previous normal distribution is effectively broken, followed by the re-emergence of order that would seem to suggest that stock prices have shifted to a new "energy state."

In other words, stock price changes are the result of normal variation until they're not. Periods in which stock prices behave normally may last months or years, and perhaps as long as a decade. There is however, no evidence that stock prices have ever followed a normal distribution for periods much longer than that, as disruptive events occur that alter the effective energy state of the stock market, with order ultimately re-emerging at a different level of equilibrium.

Let's now take a closer look at the stock market as it moves from order, passes through a disruptive event into a new order, which finally breaks with the onset of a new disruptive event. We featured the following chart showing the period from March 1991 through February 2008 in Recognizing Disorder in the Stock Market: 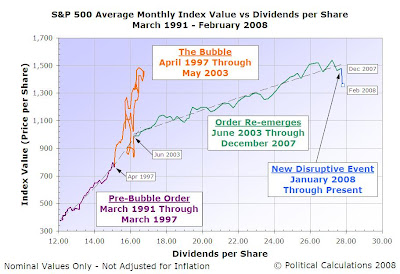 The chart above shows the following periods:

The disruptive events identified above, in which the previous order that existed in the stock market was broken, were driven by changes investors expected in the future of stock dividends.

Back in the early days of the bubble, corporate earnings in S&P 500 companies surged. As a result, investors bid up stock prices, anticipating that dividends would follow. The bubble, it would seem, had some very rational roots!

As we noted earlier in this post, the electron of a hydrogen atom will change energy states by either absorbing an photon and moving to a higher energy state or emitting one and moving to a lower energy state. For the Dot-Com stock market bubble, the expectation of greater than previously anticipated dividends acted like a photon that would be absorbed into the stock market, and as a result, stock prices were propelled to higher levels.

From our perspective, dividends really represent the component of corporate earnings that a company's leadership believes to be sustainable for the foreseeable future. When dividends didn't follow corporate earnings and stock prices upward, it became inevitable that a severe disruption would take place. Unlike the electrons orbiting a hydrogen atom however, the entire process for the stock market played out over a number of years rather than instantaneously.

And so, in the order that emerged following the bursting of the Dot Com Bubble, investors were far more cautious, demanding substantially greater dividends in return for higher stock prices. This is reflected in the lower slope of the general trendline of the period from June 2003 through December 2007 compared to the previous period of order from March 1991 through March 1997.

Which brings us to the disruptive event that began in January 2008.

For the stock market, the last months of 2007 were somewhat unusual. Investors and traders knew that the bursting of the housing bubble earlier in the year would have an effect on the financials, mortgage lenders and homebuilders who had grown tremendously in the previous few years on the strength of the U.S. housing market, but nobody knew when the ax was really going to fall. December 2007 came and went, all dividends that had been promised to be paid were paid, and the market was fine.

Until the books finally closed on the fourth quarter of 2007 and the new books for the first quarter of 2008 were opened. Beginning early in January 2008, a number of large financials and mortgage lenders began announcing they would be cutting their dividend payments and slashed their earnings forecasts. Stock prices quickly dropped, as these actions broke the existing order in a new disruptive event.

As it happened, things kept getting worse through March, as investors waited for more shoes to drop. When they didn't, well, here's the chart along with those five points of data corresponding to each month this year that we mentioned at the beginning of this post: 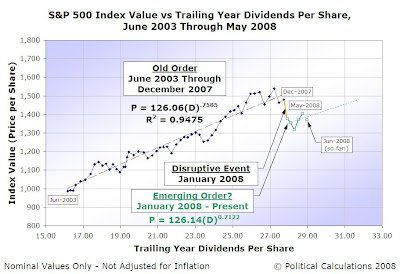 Going back to our quantum metaphor, the expectation (and reality) of lower dividend payments in the future acted as a photon being emitted. The market moved to a lower "energy state." Which, if you believe Student's t-distribution has any meaning, suggests that the stock market might be expected to move along a new, stable trajectory. Again, with investors demanding higher dividends in return for bidding up stock prices.

At least, until the expectation and reality of future dividend payments creates a new disruptive event!

Want to See How We Got Here?

Believe it or not, there is actual theory, observations and math behind our discussion above, much of which we've fully built from scratch! The following posts, presented in reverse chronological order, hit the main highlights of how we got here and also provide some essential background information.