States experiencing a delayed first wave of coronavirus cases in the U.S. are beginning to breathe a bit easier, as their rates of infection appear to have crested and begun to recede during the past month.

That can be seen in a tower chart showing the daily progression of COVID-19 infections in the United States from 10 March through 11 August 2020. This chart contrasts the continuing exponential growth of testing (the widening light blue pyramid), with the much more slowly widening number of new cases (the much narrower orange 'tower'), whose rate of growth is beginning to slow again as the delayed first wave of coronavirus cases in the south and in the western U.S. passes. 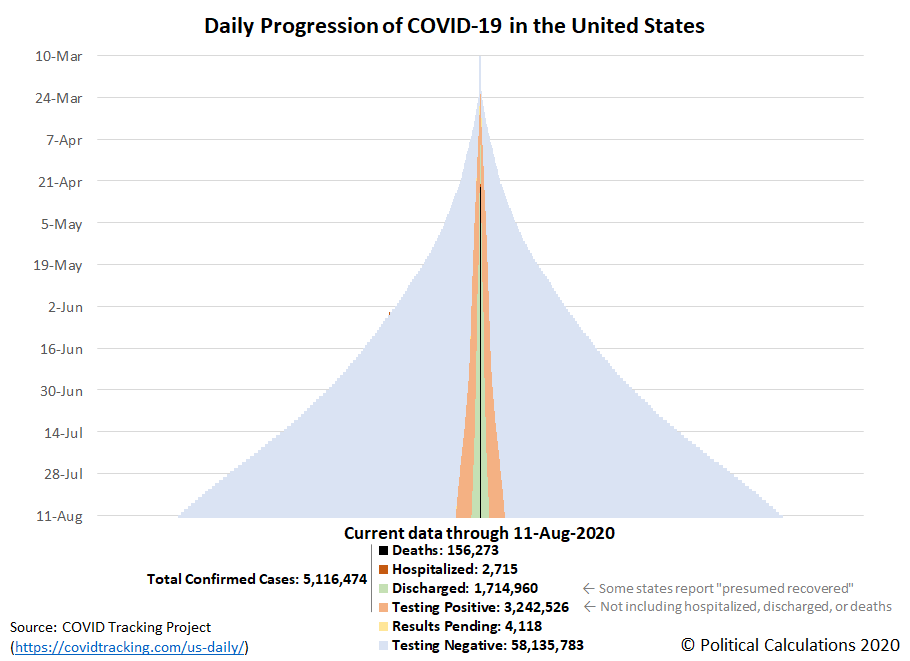 Concentrated in the sunbelt, these states are also experiencing far lower rates of coronavirus-related deaths than states in the northeastern United States, which went through their first wave of infections back in March and April 2020.

Overall, the fifth month of the coronavirus pandemic in the U.S. is showing a lot of developing positive trends, which is all the more remarkable because they have avoided repeating the kind of blanket lockdowns that shuttered businesses and sent the U.S. economy into deep recession in March 2020. In their place, they have generally substituted more limited, but also much more effective approaches to reducing the spread of SARS-CoV-2 coronavirus infection, such as requiring masks be worn in public places.

Most these states have also benefited from the end of widespread anti-police political protests. These protests were substantial contributors to the spread of coronavirus infections in many of states experiencing a delayed first wave of infections, which came soon after they lifted their own statewide lockdowns. The effect of the end of these protests has been to reduce the rate of spread of coronavirus infections.

The rankings of states in the skyline chart has changed substantially in the past month, reflecting the increased rates of coronavirus infections in the sunbelt states as compared to northeastern states. Louisiana now ranks at the top for percent of population with confirmed infections, followed by Arizona, Florida, and Mississippi.

You can see a clear difference in the shape of the skyline tower charts for the states that have experienced a delayed first wave of infections, which somewhat resemble the profile of the bellmouth of a trumpet, and those of states like New York that was the epicenter of early COVID-19 infections in the U.S., which look more like a sandcastle towers. You can also see that in the top ranked states, the rate of growth of new infections is beginning to slow, which confirms their wave of infections has crested and is beginning to recede.

There is also a dramatic difference in the width of the "black" tower representing each state's deaths attributed to coronavirus infections, which we'll emphasize in a chart showing each state's percentage ratio of deaths to its recorded number of confirmed COVID-19 cases. 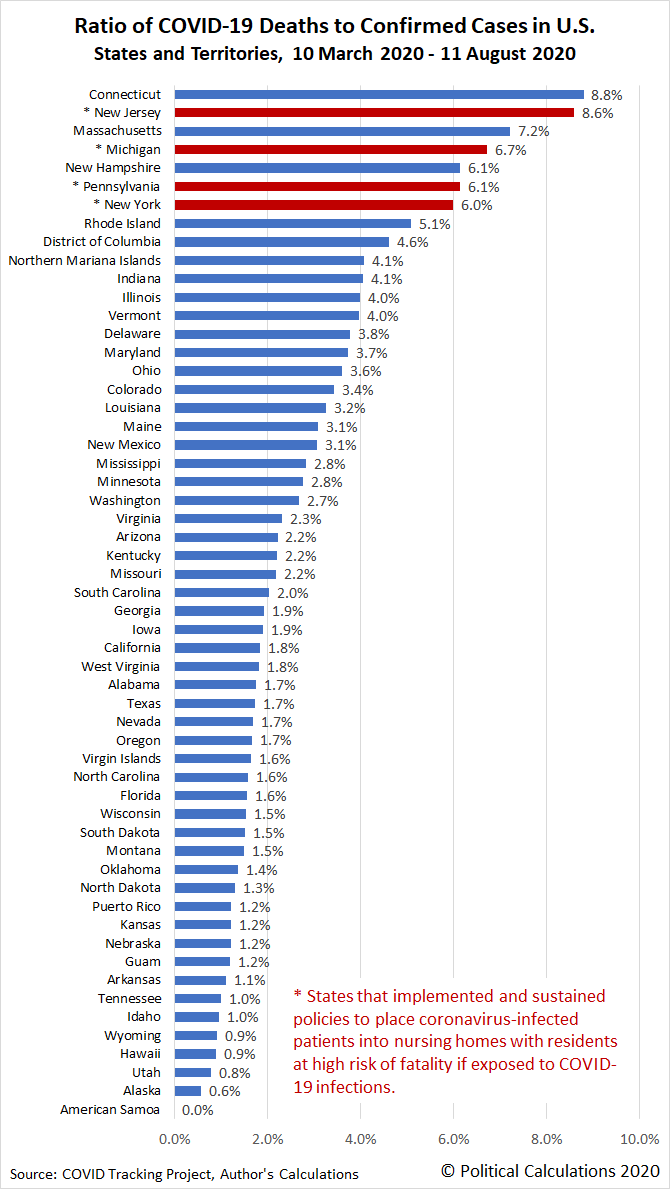 The top ranked states in this chart are mostly concentrated in the northeastern U.S. Four of the states, New Jersey, Michigan, Pennsylvania, and New York, stand out because these states implemented ill-advised policies that greatly contributed to their higher deaths rates, such as forcing nursing homes to admit coronavirus infected patients. Nursing home deaths also play a significant role in elevating the relative percentage of deaths in other states with ratios of 4.6% or higher.

By contrast, the states with delayed first wave coronavirus cases have avoided similar death rates with respect to their total number of confirmed cases. That can be seen in the following chart comparing the progression of COVID-19 in two states we've been following closely, New York and Arizona, where each have had a similar share of their populations affected. Where they differ is in their relative death rates, where New York, with its ill-fated policy of forcing coronavirus patients into its nursing homes, experienced far higher rates of COVID-19 deaths. 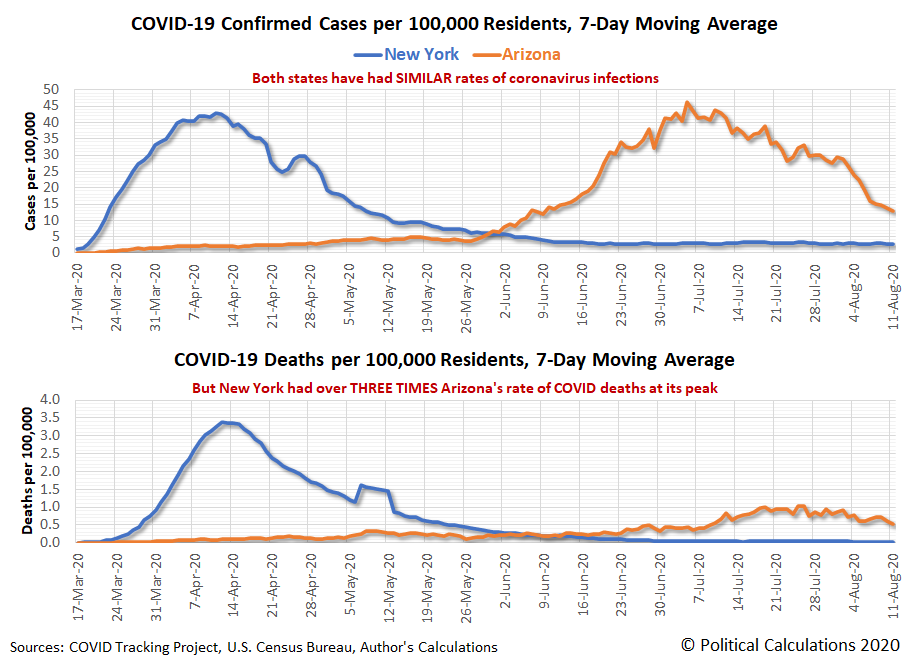 By taking steps to prevent coronavirus exposures and infections in nursing homes, the delayed first wave states have largely succeeded in reducing the incidence of deaths resulting from coronavirus infections as compared to the states in the northeastern U.S. that did not. By implementing effective strategies to minimize coronavirus exposures, such as requiring masks be worn in public venues with high likelihoods of transmission, these states are now moving past their crests in number of cases and deaths without having to completely shutter their economies.

They could have done better. If they had taken more effective actions to temper the anti-police protests that ran for weeks after the death of George Floyd in Minneapolis, Minnesota, many of these states could have significantly reduced the size of their delayed first wave crests in cases to much more manageable levels while also reducing the number of deaths. Then again, the protest organizers could have done that too. Where should the liability for the excess cases and deaths these states experienced because of the protests lie?