We figure that particular question has to be pretty interesting to anybody who has money in the market, or is trying to figure out when to put money into the market!

To find out the answer to that question, we took our chart showing the correlation of stock market distress and economic recessions in the U.S. and mapped out where the stock market bottomed out during the periods of recession. The resulting chart is below: 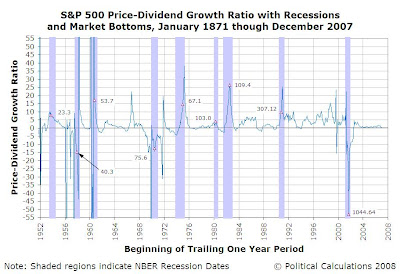 The values shown on the chart above are the average monthly index value of the S&P 500 in the month in which the index reached its lowest value after the U.S. economy entered a period of recession. We also limited our initial analysis to the years from January 1952 through December 2007, the most recently completed month for which we have full data for the S&P 500. This period also corresponds with what we've previously identified as the modern era of the U.S. stock market.

As a general rule of thumb for this modern era, stock market bottoms would appear to coincide with peaks in the absolute value of distress indicated by the Price-Dividend Growth Ratio. As we've noted previously, this ratio spikes when the year-over-year rate of growth in S&P 500 dividends per share approaches a value of zero.

As of the futures data we have that applies from 23 January 2008 onward, the S&P 500's dividend futures indicate that this rate will reach a value of zero sometime in either September or October 2008, continuing into negative territory through December 2008, with a recovery in the dividend growth rate occurring rapidly afterward: 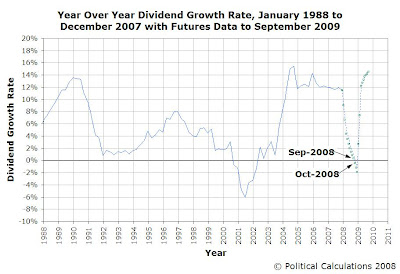 This data would seem to suggest that the stock market will be a much nicer place for investors after the peak of distress in the market has passed, potentially as early as November 2008, as our chart showing market bottoms with the Price-Dividend Growth Ratio indicates that market bottoms typically, but not always, follow the peak of market distress in the modern era.

In our dividend growth rate chart above, we've shown the change in dividend futures data from when we first noted it for 15 January 2008 (the blue dashed line) to the latest data we now have available through 23 January 2008 (the green square datapoints.) In just that week-long period, the dividend futures data shifted to indicated a steeper and deeper decline in the year-over-year dividend growth rate for 2008. Where the previous data had suggested the dividend growth rate would pass through the zero level in October or November, the newer data now indicates that this will occur a month earlier. Unsurprisingly, the futures data can be volatile, so anyone looking to make their own investing decisions based on the data we've presented above should take that fully into account.

We'll revisit all this data again on 20 February 2008, when we will next update our tool for finding the rates of return for investments in the S&P 500 between any two months from January 1871 through January 2008!