Political Calculations
Unexpectedly Intriguing!
May 3, 2019
1 in 13 Chance of U.S. Recession Starting Before May 2020

The Federal Reserve chose to leave short term interest rates in the United States unchanged at the conclusion of its third two-day meeting of 2019 on 1 May 2019, holding its target range for the Federal Funds Rate between 2.25% and 2.50%.

In the day since the Fed's announcement and Fed Chair Jerome Powell's subsequent press conference in which he communicated that the Fed was disinclined to change interest rates in any direction, the odds that the Fed would cut the Federal Funds Rate in 2019 has dropped below 50%. According to the CME Group's FedWatch Tool, investors have shifted their expectation of a rate cut from happening as early as in 2019-Q3 out to 2020-Q1, with those odds just a bit above 50%.

Never-the-less, the probability that the U.S. economy will enter into a recession sometime between 1 May 2019 and 1 May 2020 has risen to 8%, or roughly a one-in-thirteen chance, as shown in the latest update to the Recession Probability Track. 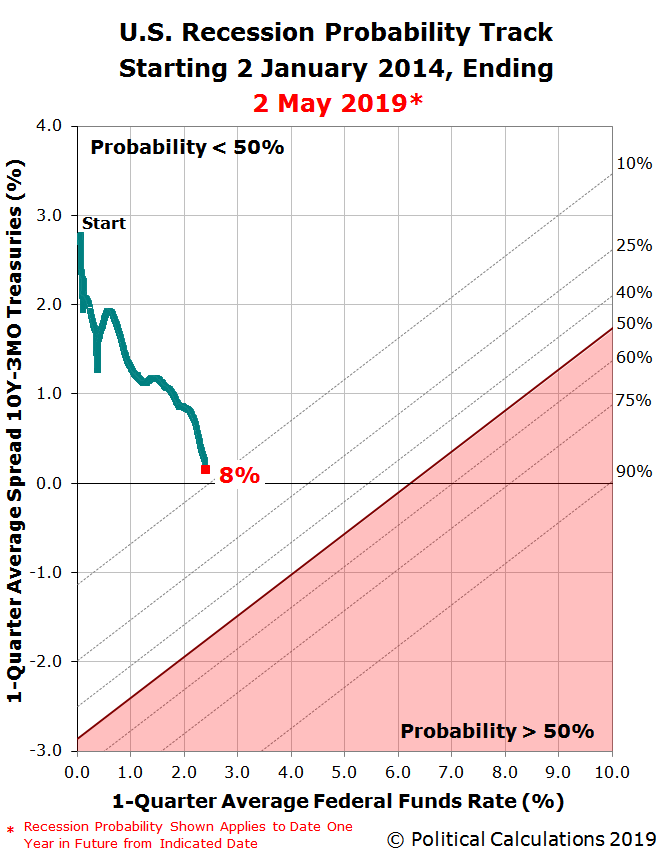 The Recession Probability Track is based on Jonathan Wright's 2006 paper describing a recession forecasting method using the level of the effective Federal Funds Rate and the spread between the yields of the 10-Year and 3-Month Constant Maturity U.S. Treasuries. If you would like to run your own recession probability scenarios, please take advantage of our recession odds reckoning tool, which like our Recession Probability Track chart is based on Jonathan Wright's paper.

It's really easy. Plug in the most recent data available, or the data that would apply for a future scenario that you would like to consider, and compare the result you get in our tool with what we've shown in the most recent chart we've presented. Meanwhile, the links below present each of the posts in the current series since we restarted it in June 2017.