With the U.S. Treasury yield curve having briefly inverted during the past few weeks, we're increasing the cadence at which we will feature our recession probability track. In addition to presenting updates to the odds of a U.S. recession shortly after the conclusion of the Federal Reserve's Federal Open Market Committee's meetings every six weeks, we will also present it roughly at the halfway points between those meetings while the spread between the 3-Month and 10-Year Treasuries is either near-zero or negative.

The good news is that constant maturity 3-Month and 10-Year U.S. Treasuries were only mildly inverted between 22 March 2019 and 28 March 2019, where the spread between them has since become positive. The spread however remains near zero, where at 0.20%, the average spread between the two Treasury yields over the last rolling one-quarter period has dropped below a quarter point.

Combined with the an average Federal Funds Rate of 2.40% over the same period, the probability that the U.S. economy will enter into a national recession at some time in the next twelve months has risen to nearly 7%, or roughly a 1-in-14 chance according to Jonathan Wright's 2006 recession prediction model.

The Recession Probability Track visualizes how the odds of an official U.S. recession starting have increased from 2 January 2014 through 9 April 2019. 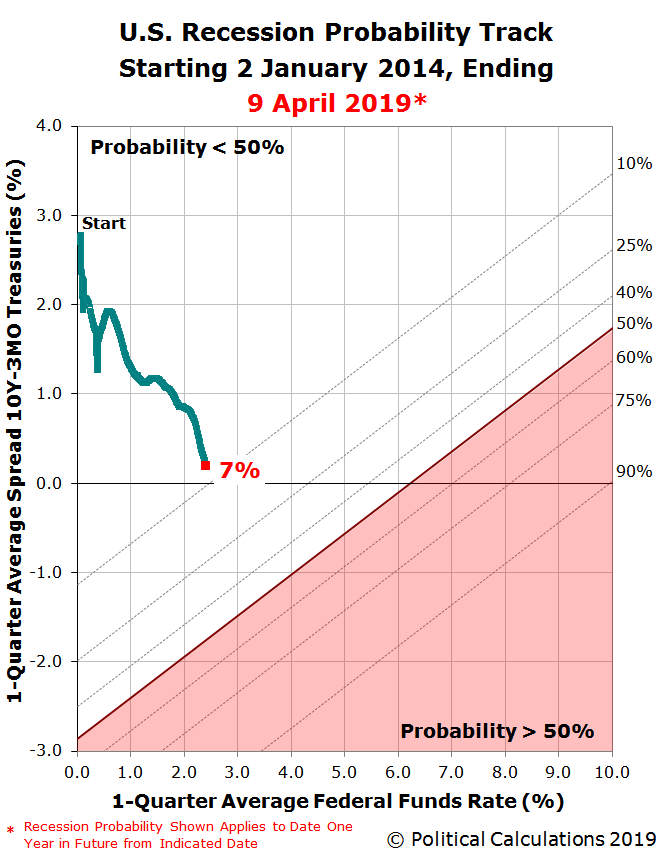 We appreciate that we're stretching the capabilities of Wright's model, which was developed using historic data where the Federal Funds Rate was typically much higher than it is at present at the times when the National Bureau of Economic Research has previously determined recessions in the U.S. economy to have begun.

If the absolute value of that negative margin is added to today's Federal Fund Rate, the combination of the Fed's series of rate hikes and its quantitative tightening policies has effectively boosted the Federal Funds Rate by 5.40% since early 2014.

Using that figure in our recession odds reckoning tool, which like our Recession Probability Track chart is based on Jonathan Wright's 2006 paper describing a recession forecasting method using the level of the effective Federal Funds Rate and the spread between the yields of the 10-Year and 3-Month Constant Maturity U.S. Treasuries, we find the corresponding odds of recession beginning before April 2020 would be 1 in 3.

How real that shadow rate of recession might be remains to be seen. In the meantime, if you would like to generate your estimate of the odds of recession using our tool, please do. We created the tool so you never have to wait for us or the Fed!

It's really easy. Plug in the most recent data available, or the data that would apply for a future scenario that you would like to consider, and compare the result you get in our tool with what we've shown in the most recent chart we've presented. Meanwhile, the links below present each of the posts in the current series since we restarted it in June 2017.