Getting past the end of 2020's holiday season appears to have been the key to turning the corner on COVID-19 across much of the United States.

We've already affirmed that's the case with Arizona, where we now find the national data for the United States is following a very similar pattern. The peak in the rolling 7-day averages of newly confirmed COVID-19 cases was recorded on 11 January 2021 and the peak in daily reporting of deaths peaked two days later. Dramatic declines have followed in the days since these peaks, which can be seen in our first chart. 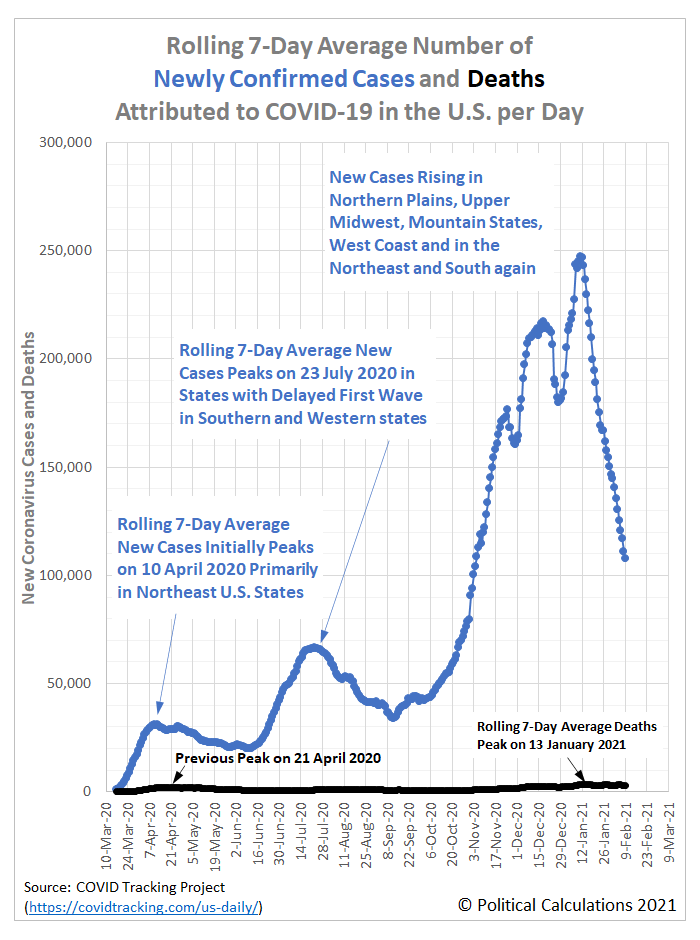 The decline in cases has been particularly dramatic during the past month, where our previous snapshot of this data came just after the peak on 11 January 2021.

The Progression of COVID-19 at the State and Territory Level

The latest update to the skyline tower chart presents the progression of positive COVID-19 cases in the U.S. by state or territory, ranked according to the reported percentage of cases within the state or territory's population. The individual charts depict the number of positive cases, the number of recovered patients or those discharged from hospitals, the number of hospitalized patients and the number of deaths. Each of these charts is presented in the same scale with respect to the size of its population over the period from 10 March 2020 through 9 February 2021, making it easy to visually compare a given state's or territory's experience with others.

Among individual states, North Dakota and South Dakota still lead in the measure of the percentage of population who has tested positive for COVID-19. The good news for these states however is that the rate of new infections has continued to drop to what are now very low levels. That change can be seen in the slower pace at which the bases of their individual tower charts are expanding in the skyline chart.

Meanwhile, nearly all other states are experiencing decelerating growth in the number of new COVID-19 cases, in what is perhaps the most remarkable month-over-month change during the entire coronavirus pandemic.

We've already observed that North Dakota and South Dakota top the list of COVID-19 cases as a percentage share of their state population. But the two states differ considerably from each other in their approaches to dealing with the coronavirus pandemic, as Yinon Weiss notes in a tweet:

North and South Dakota were both hit relatively hard by COVID. They had very different responses but got to very similar outcomes.

The difference is that South Dakota's @govkristinoem respected people's rights AND their economy (now 3.5% unemployment rate).

Look at the data. pic.twitter.com/bnFDjXdiOX

Which state's policies do you suppose was more beneficial to its population?

The past month has also seen a dramatic change in the state of New York which, thanks to a lawsuit filed by the Empire Center, has finally been forced to provide a more complete accounting of the number of deaths attributed to COVID-19 among the state's highly vulnerable residents of nursing home and assisted care facilities. According to data the state now officially acknowledges, at least 14,932 elderly and sick residents of New York's nursing homes and assisted care facilities are presumed to have died after having been infected by the SARS-CoV-2 coronavirus through 5 February 2021. That would be more than two out of every five deaths attributed to COVID-19 in the state of New York, the bulk of which occurred in the period from March through May 2020.

But this story is far from over. Governor Cuomo and his administration are continuing to stonewall on the reporting of the timing of these deaths, many of which are believed to have occurred as a direct consequence of their panic-borne policies in the early months of the coronavirus pandemic in the United States. For more background on Governor Cuomo's developing scandal, which has exploded in the past two weeks, be sure to follow our ongoing timeline detailing its major twists and turns.

We've regularly tracked the progression of the coronavirus pandemic within the United States since data for it began being tracked on 10 March 2020. Here are the previous entries in our series featuring the skyline tower charts we developed to visualize its rates of spread within the individual states and territories of the U.S., presented in reverse chronological order.