As we complete the eighth month of the coronavirus pandemic in the United States, we find the nation is experiencing a surge in coronavirus cases that, at the national level, looks like a third wave, which is how it is frequently described in media reports.

More usefully, what the U.S. has been experiencing is better described as a series of regional waves, with different parts of the country experiencing surges of COVID outbreaks at different times as the SARS-CoV-2 coronavirus has propagated through the national population. That basic picture holds, but has become more complicated, as states and territories that had previously passed through a regional wave are also seeing rising numbers of cases at this time.

Here is a trifecta of charts tracking the daily progression of COVID-19 in the United States. The leftmost chart visualizes the nation's cumulative totals of positive and negative test results from 10 March 2020 through 10 November 2020, with the positive cases broken down to indicate the relative share of Americans who have tested positive, who have been admitted or have been discharged from hospitals, or whose deaths have been attributed to COVID-19. The middle chart tracks the nation's daily test positivity rate, or rather, the percentage of positive test results within the total level of testing. The rightmost chart presents the rolling 7-day averages for the numbers of newly confirmed COVID-19 cases and deaths in the U.S., which is where you can see the various waves in newly reported cases, where the third is showing very rapid growth.

The first wave indicated in the third chart was especially concentrated in the northeastern region of the U.S. and the second wave mainly affected Sunbelt states across the southern and western part of the continental U.S. The third wave has seen COVID-19 infections spread primarily in the northern plains, the upper midwest, and in mountain states, but also coincides with the return of growing numbers of infections in northeastern states and in the Sunbelt region.

Since Arizona provides relatively high quality and detailed data for its coronavirus cases, we've been regularly tracking its coronavirus epidemic in a separate series, so we have some insight into the returning increase of cases. Its most recent data suggests the reopening of high-exposure risk businesses and venues marked a turning point for the return of increases cases after its first wave had ebbed.

In other parts of the U.S., particularly in heavily contested states of the 2020 U.S. elections, we think political events in October may also be contributing to the current rapid spread of cases, where the post-election public celebrations by crowds of Democrats claiming victory in the presidential election are now contributing to the third wave's exponential increase in cases.

The Progression of COVID-19 at the State and Territory Level

The latest update to the skyline tower chart presents the progression of positive COVID-19 cases in the U.S. by state or territory, ranked according to the reported percentage of cases within the state or territory's population. The individual charts depict the number of positive cases, the number of recovered patients or those discharged from hospitals, the number of hospitalized patients and the number of deaths. Each of these charts is presented in the same scale with respect to the size of its population over the period from 10 March 2020 through 10 November 2020, making it easy to visually compare one jurisdiction's experience with others.

States in the northern plains and the upper midwest rank highest in this edition of the skyline tower chart, where their towers resemble a standing trumpet flare, which is the visual indicator of exponential growth in the spread of COVID-19 infections. North Dakota, South Dakota, Wisconsin, Iowa, and Nebraska currently make up the top tier of states in this category.

The tower charts for other states and territories are more bell-shaped, which indicates they experienced an earlier wave of cases. Most states in this category, such as Mississippi, Tennessee, Alabama, and Louisiana, are seeing growing numbers of cases, but not the same kind of exponential growth being experienced by states currently experiencing their first wave.

A third category of states are those that experienced an earlier wave of cases, which are now also seeing growing numbers of cases, and even some exponential growth. Illinois, Rhode Island, New Jersey, and New York fall in this group.

The fourth category of states and territories are those whose tower charts are comparatively "skinny", which includes Oregon, Puerto Rico, Hawaii, New Hampshire, Maine, and Vermont. Given the experience of other states and the generally infectiousness of the SARS-CoV-2 coronavirus, these charts mostly reflect the coronavirus has not yet significantly propagated among their populations. 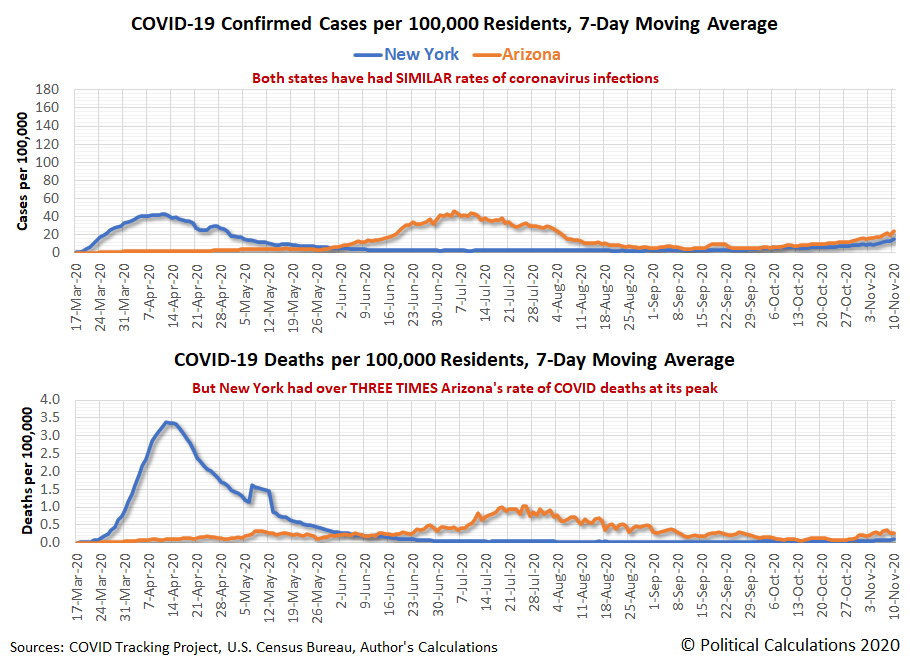 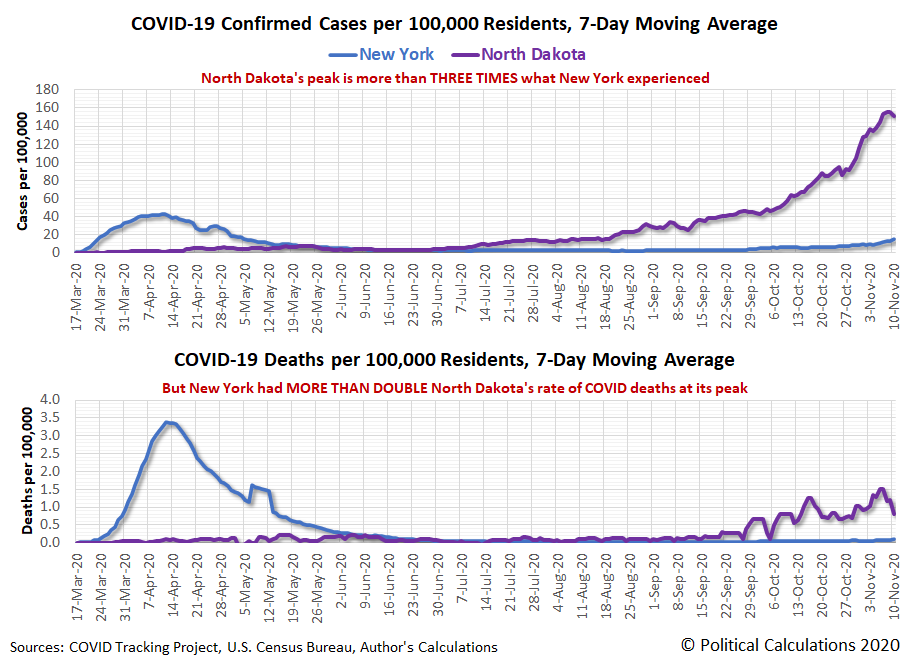 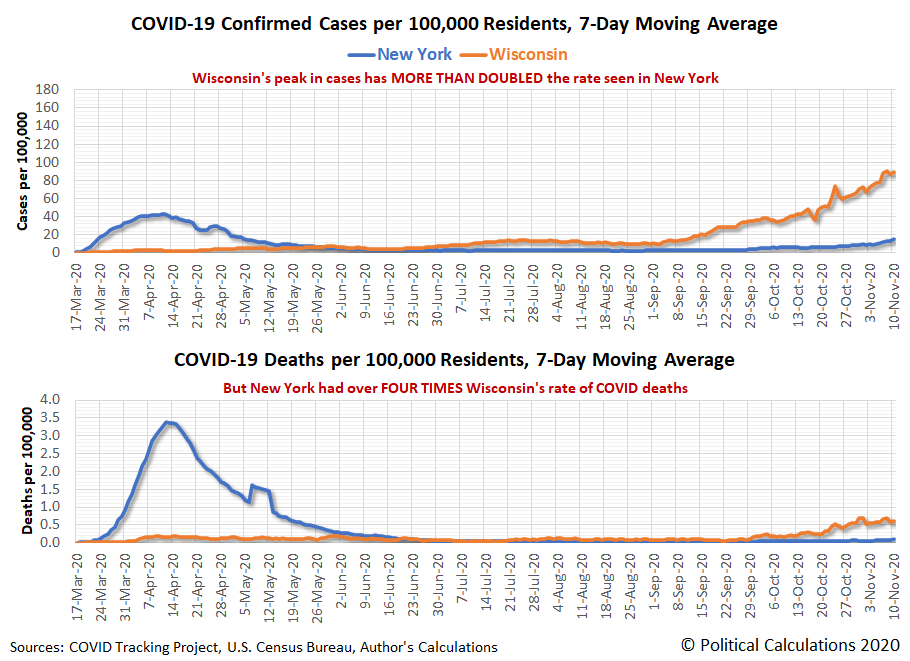 These charts illustrate the true nature of the coronavirus pandemic within the U.S. as primarily the result of a series of regional waves through this point of time.

This data also underscores, once again, how amazingly bad New York Governor Andrew Cuomo's policies were during his state's experience with the coronavirus pandemic. Those policies, born of his panic, cost the lives of thousands of the state's most vulnerable residents and put the lives of thousands more at risk. It is still an open question of whether he or members of his administration will be held accountable for the easily foreseeable consequences of their policies.

For as bad as the spread of COVID-19 is in the United States, it is much, much worse in Europe. The continent is seeing a similar regional wave effect as the U.S., with infections spreading fastest in areas that were relatively unaffected in the continent's first wave earlier in 2020. What's more, Europe's second wave has arrived despite many nations having seemingly beaten back its first wave through very restrictive lockdown mandates earlier this year. We anticipate the lockdown measures now being implemented in these nations will have a negative impact on their national economies and the global economy.

By extension, and by experience from the coronavirus recession earlier this year, it is reasonable to assume that imposing a similarly restrictive national lockdown in the U.S. would have devastating impact on both the U.S. economy and the world without guaranteeing a COVID-19 free future.

We've regularly tracked the progression of the coronavirus pandemic within the United States since data for it began being tracked on 10 March 2020. Here are the previous entries in our series featuring the skyline tower charts we developed to visualize its rates of spread within the individual states and territories of the U.S., presented in reverse chronological order.