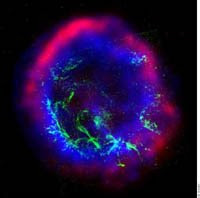 In analyzing the stock market, we often find ourselves going back to the concepts of basic physics. Today is no exception, in that we're going to reveal how the concept of acceleration factors into how stock prices change with time.

We'll begin with the raw price and trailing year dividend per share data for the S&P 500, which is available in spreadsheet form from Robert Shiller going back to 1871 (more current price and dividend data may be available from Standard & Poor). The price data in Shiller's spreadsheet is the average of the indicated calendar month's daily closing values for the S&P 500 index.

Next, we'll find the compound annual growth rate for each year-over-year period for both the stock price and trailing year dividends per share data. In doing this, we match the data for January 1871 and January 1872, then February 1871 and February 1872, and so on, all the way to our most recently available data, which spans from November 2007 through November 2008. Those results are graphically presented here.

Now, here's where acceleration comes into play. We'll next find the rate at which the compound annual growth rate of both the S&P 500's average monthly values and trailing year changes with time. We do this by first finding the difference between each month's growth rate and the value of the growth rate for the preceding month, then multiplying each of these values by 12 to get an annualized change. Graphing the data from February 1872 onward produces the following chart: 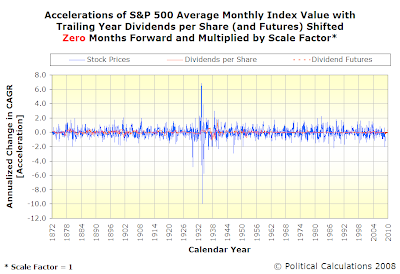 Let's next zoom in on the arbitrary ten year period from 2001 through 2011. We've selected this time frame since we have dividend futures data extending midway into 2010, which we wanted to incorporate for its potential relevance: 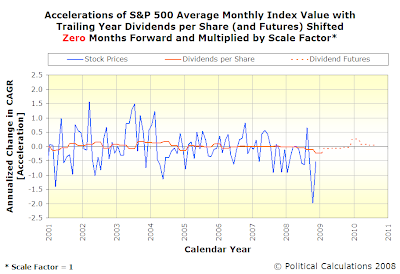 For our next trick, we're going to amplify the dividend acceleration data by multiplying all of it by a factor of 9 for this period. We obtained this number through trial and error - it's really just enough to make the peaks in each data stream roughly the same: 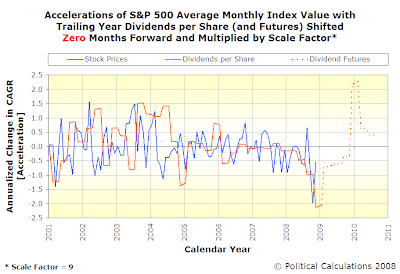 Now, the only thing that remains to to shift the trailing year dividend growth rate acceleration data forward (earlier) in time so that it roughly coincides with the accelerations in the stock price growth rate. This makes sense if what investors expect for the future value of dividends are the key driver of stock prices. We've presented our data in the table below, which shows how stock price and dividend accelerations match up when shifting the dividend data earlier anywhere from one to seven months:

We find that investors typical alter stock prices in the S&P 500 anywhere from two to seven months in advance to account for expected changes in the growth rate of the index' dividends per share. We also find that they most often alter stock prices between three and four months ahead of when a corresponding change in the dividend acceleration is expected to occur (we've emphasized the four-month period in the graphs above, but could very easily have selected the three-month time shift.)

Of course, the logical consequence of all this is that if you know what stock prices are today and if you know how much their rate of growth is going to change, (and thanks to the S&P 500's dividend futures data, we do), you can predict where they're going to be in the future with a fair degree of accuracy.

The trick though, as we've shown, is to work out when they're going to get there. As you can see from our charts above, that may not be so easy!

We'll conclude this post by offering some observations from a quick survey of the full span of the historic data:

On a quick side note, while we're a few days late due to other posting obligations, we thought we'd celebrate our fourth anniversary with this post. Our annual anniversary tradition is to post something absolutely mind-blowing. We hope demonstrating how dividends have directly driven stock prices in the 21st century qualifies!

Thanks to Gary Santoni and Alex Tabarrok, we have a pretty good idea that we're on the right track with this kind of analysis. Here's the conclusion to their 2002 paper Expected Dividend Growth, Valuation Ratios and Rational Optimism, emphasis ours:

Large changes in valuation ratios can be explained by relatively small changes in the expected dividend growth rate. We use the Gordon growth model to back out an "expected" dividend growth rate and we compare this rate with the actual rate of dividend growth. We cannot reject the hypothesis that our estimated rate is a rational expectation of the actual. As a result, a model of valuation ratios based solely on a handful of fundamentals can easily explain the variation in the data. In particular, the historically high ratios of the late 1990s and today are consistent with rational expectations about dividend growth.

The main weakness of the paper is that Santoni and Tabarrok utilize the Gordon growth model, which assumes a constant growth rate for dividends, which we've shown only holds for limited periods of time. Also, in our view, Gordon's growth model dances around the real non-linear allotropic relationship between dividends and stock prices, which we uncovered just over a year ago.

Update: We modified the Elsewhere on Political Calculations section of this post to incorporate our list of posts into a dynamic sorting table. Just click the column headings to sort the table by date or post title!