The City of Philadelphia's tax collections from its controversial tax on sweetened beverages are continuing to fall well short of the levels that the city's politicians desired. For taxes assessed on sales from January 2017 through preliminary data for October 2017, total beverage tax collections in the city are running over 14% below the amount that city officials were counting upon to support their desired level of spending for a new "free" pre-K school programs, to cover a portion of the debt that the city will take on to make physical improvements to parks, libraries and recreation centers, and also to fund benefits for city employees. 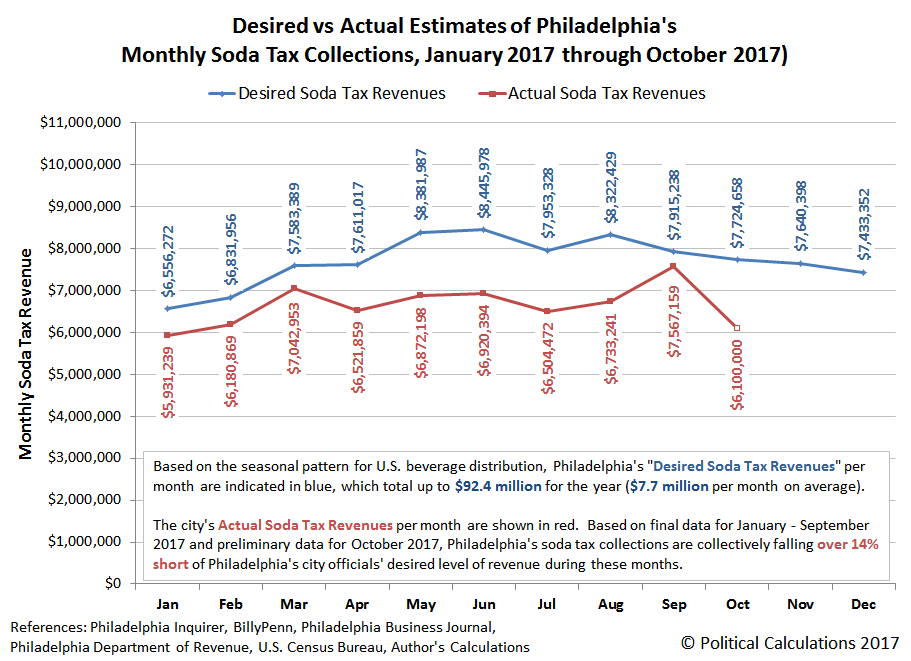 In the chart above, we've projected the amount of tax collections that Philadelphia would need to collect in each month of the year to reach its annual target of $92.4 million if sales of the sweetened beverages distributed in the city followed the seasonal pattern for soft drink distribution in the United States, which we've shown in blue. Meanwhile, we've shown the actual tax collections that Philadelphia's revenue department has taken in from the tax assessed in the indicated months in red. As you can see, the city's actual sweetened beverage tax collections have continually fallen anywhere from 4% to 21% short of the monthly revenue targets needed to meet their annual revenue target.

The closest that Philadelphia has come to hitting its desired level of monthly revenue was for the soda taxes assessed in September 2017 and collected in October 2017, which at $7,567,159, nearly came within $348,000 of the amount that might reasonably have been expected for the month if the city's tax collections were coming in as city officials desired. Unfortunately, that month appears to be an anomaly, according to Philadelphia's Deputy Revenue Commissioner Marisa Waxman:

"This is a new tax with a lot of seasonality and patterns that we’re still learning, so we've never had collections in October before," she said. "There were some circumstances that contributed to this that we think might not repeat. There are other things in there that could repeat. We’ll just have to continue to monitor how this comes in month to month."

Waxman's comments can also be taken as a confirmation that Philadelphia's soda tax collections are not coming in anywhere near as reliably as city officials expected.

Overall, we also find that through October 2017, the total sales of beverages that are subjected to the Philadelphia Beverage Tax are collectively running about 37% below the levels that city officials indicated were occurring before the implementation of the tax. 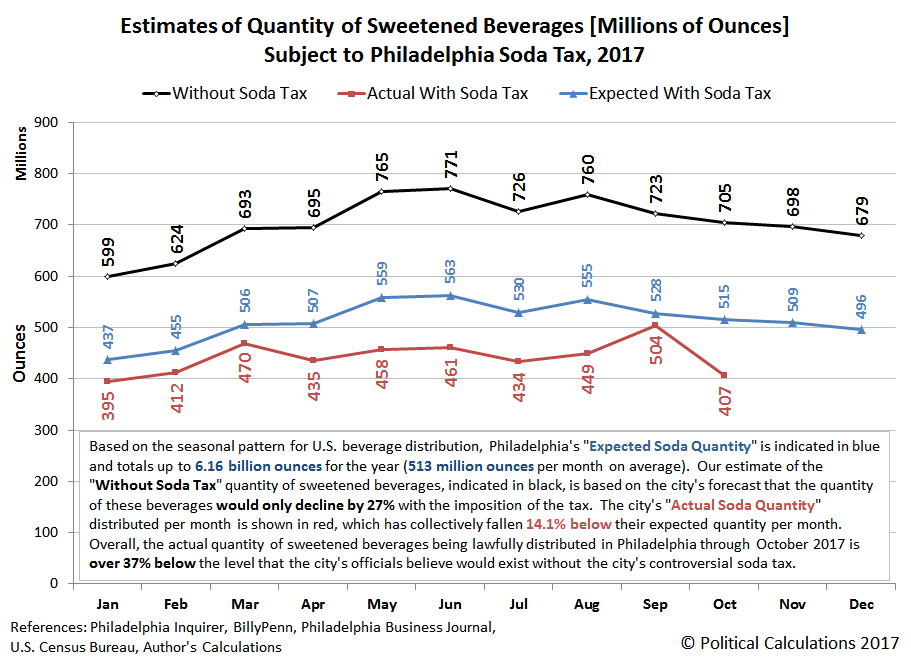