Political Calculations
Unexpectedly Intriguing!
29 May 2019
1 in 12 Chance of U.S. Recession Starting Before June 2020

Through 28 May 2019, that combines with a much lower average level for the Federal Funds Rate over the last 90 days of 2.41% than was recorded back in mid-2007 to place the odds the U.S. economy will enter into a recession sometime between 28 May 2019 and 28 May 2020 at nearly one-in-twelve, or a little over an 8% probability, as shown in the latest update of the Recession Probability Track. 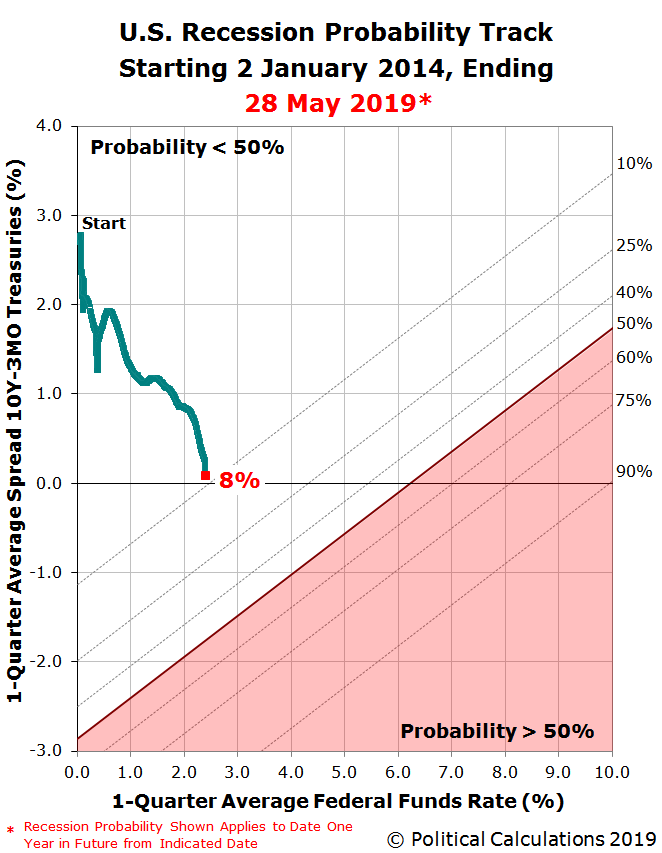 The Recession Probability Track is based on Jonathan Wright's 2006 paper describing a recession forecasting method using the level of the effective Federal Funds Rate and the spread between the yields of the 10-Year and 3-Month Constant Maturity U.S. Treasuries. If you would like to run your own recession probability scenarios, please take advantage of our recession odds reckoning tool which, like our Recession Probability Track chart, is based on Jonathan Wright's paper.

For example, the probability of recession we've discussed above does not take into account the amount of additional tightening that the Federal Reserve has achieved through its quantitative tightening policies which, if they had occurred in the form of interest rate hikes as some analysts have argued, would add add another three hundred basis points to the effective level of the Federal Funds Rate. Running our recession odds tool to consider that scenario with the same spread between the 10-Year and 3-Month treasuries, it finds that this shadow rate would coincide with a probability of recession occurring before June 2020 of 36.5%, which would be better than 1-in-3 odds.

We don't know how real an effect the shadow rate might have for predicting the probability of recession in the future, but it does provide an example of the kind of scenarios you can consider using the tools we've developed over the years.

Using the tools is really easy. Plug in the most recent data available, or whatever data would apply for a future scenario that you would like to consider, and compare the result you get in our tool with what we've shown in the most recent chart we've presented, which would be the official probability we obtained from using the available nominal data. Meanwhile, the links below present each of the posts in the current series since we restarted our series tracking the probability of recession in the U.S. back in June 2017.