It's soup season, so what better time to update our records of the historic prices Americans have paid for an iconic can of Campbell's Condensed Tomato Soup, which now span January 1898 through January 2020!

Now updated through January 2021: The Price of Campbell's Tomato Soup in the Coronavirus Pandemic 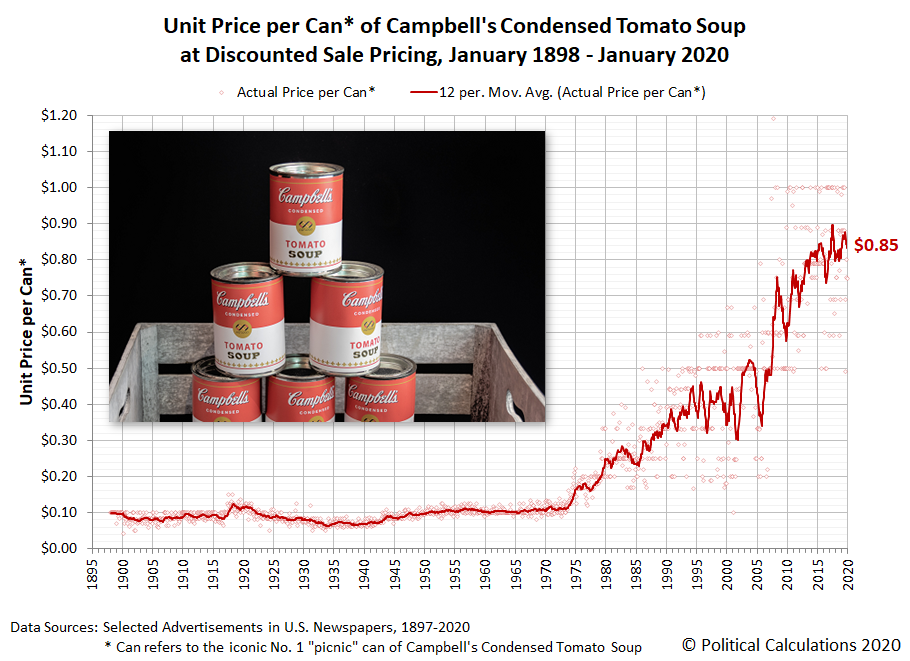 As of January 2020, the average advertised sale price that Americans have paid for a 10.75 fluid ounce can of Campbell's condensed tomato soup is $0.85. Almost all of that price escalation has occurred since 10 April 1974, when the U.S. government lifted its price controls on food, where for the first 76 years of its history, Americans paid somewhere between $0.07 and $0.12 for each Number 1-size can of Campbell's Condensed Tomato Soup they bought.

If you do the math, where the average picnic-size can of Campbell's tomato soup could be bought for just $0.12 on sale as late as October 1973, that works out to an average annual rate of tomato soup inflation of about 4.3% for American consumers during the last 46+ years.

Fifteen years ago, it wasn't uncommon to see a can of Campbell's tomato soup on sale for $0.20. Today, it is becoming rare to see a sale price below $0.50 when the soup is heavily discounted, but still without having to use coupons.

Our coverage of America's most iconic soup, presented in reverse chronological order!